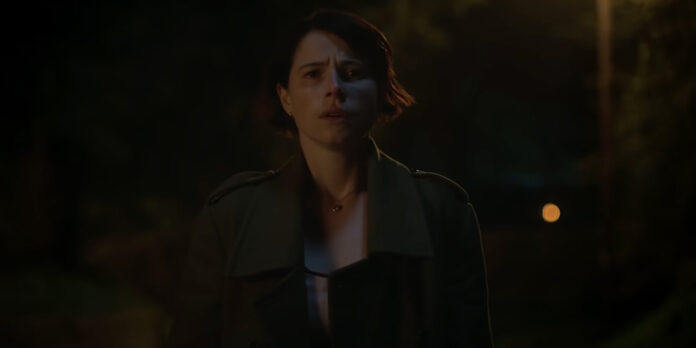 THE STORY – In the aftermath of a personal tragedy, Harper retreats alone to the beautiful English countryside, hoping to find a place to heal. However, someone or something from the surrounding woods appears to be stalking her. What begins as simmering dread soon becomes a fully formed nightmare, inhabited by her darkest memories and fears.
​
THE CAST – Jessie Buckley, Rory Kinnear, Paapa Essiedu & Gayle Rankin
​
THE TEAM – Alex Garland (Director/Writer)
​
THE RUNNING TIME – 100 Minutes

​Writer/Director Alex Garland is no stranger to challenging and surprising his audience. With the success (and debate) of “Ex Machina” and “Annihilation,” he has become synonymous with striking visuals within different genres that force his audience to think. Four years after his last feature film, Garland returns to the big screen with “Men,” which is both a departure and extension of his previous works.

Harper (Oscar-nominee Jessie Buckley) is renting a cottage in the countryside for a holiday. She is recently widowed and needs time to step away from her busy city life in order to process her feelings toward her husband’s (Paapa Essiedu) death. Upon arriving, Harper notices an apple tree on the property, picks the fruit, and takes a bite. The man in the window, the sweet innkeeper, Geoffrey (Rory Kinnear), states that she shouldn’t eat the forbidden fruit but quickly laughs, implying that it is a joke. However, her holiday getaway quickly turns into anything but, as she navigates situation after situation with the town’s men, each one more dangerous than the next (who all seem to resemble each other?).

Garland has made a film that relies on all the horror elements of uneasiness without fully leaning into a standard ‘horror film.’ “Men” is a film about feeling afraid instead of being afraid. It is eerie and unsettling throughout and never lets up on its audience. The potential element of danger is what keeps the audience on their toes instead of traditional jump scares. This is all achieved by the collaboration between Garland, director of photography Rob Hardy, editor Jake Roberts, and composers Geoff Barrow and David Simpson. Hardy, in particular, a longtime collaborator with Garland (who has worked on both “Ex Machina” and “Annihilation“), paints the country cottage town with immersive bright colors. The house is juxtaposed with rooms colored in deep red, clear white, and shades in-between. While the flashback scenes with Harper and her husband are under a red tint, igniting a sense of dread, fear, and uncertainty, this makes the green grass and blue water of the countryside all the more attractive and refreshing. It is as if Harper is getting a breath of fresh air, only to be pulled back into a black hole so dark that one’s sense of perception and spatial awareness is completely thrown off. The results are some of the most beautiful and terrifying images of the year.

With a film that has a concept as vague as “Men,” one’s reaction will depend on what they emotionally bring to the film, which is Garland’s approach to the story in the first place. He is not giving the audience any answers or concrete statements in addition to the simple premise of “men are haunting a woman.” Where one goes with that statement is up to them, which will result in fascinating conversations and furious debate. Some might find the lack of a tight narrative to be a negative element of a film, but it also showcases Garland’s skill as a director. Yes, the film is ambiguous and open to interpretation, but nothing in the film is present for the simple sake of it. Each scene, line, prop, and edit has a hidden meaning. But what one takes from these aspects can and will vary, and the film is intentionally designed to have this effect. “Men” is a stripped-down primal psychological thriller that is also a study on grief, regret, and gender dynamics. It’s poetic in its realism and realistic in its poetry. The blending of opaque yet specific filmmaking styles only further instates how Garland is one of the best modern directors who is never afraid to push conventional storytelling barriers.

Jessie Buckley shows no signs of slowing down after her first Oscar nomination last year for “The Lost Daughter.” As Harper, she is a perfect blank canvas and window for the audience. Her subtle reactions of confusion, agitation, and pure horror are visceral as she embodies every woman who has been at the hands of men’s wrongdoing, from the everyday name-calling to the unthinkable yet common violence and she plays it with respect and authenticity. But it is Rory Kinnear who steals the show, playing multiple roles, who each have their own narratives and want something different from Harper. Kinnear was certainly put up to the task with this daunting challenge for any actor and he has never been better. Each character is easily distinguishable from the other through Kinnear’s various performances. They have their own physicality, speech patterns, and overall embodiment. Both Buckley and Kinnear are at the top of their game, and watching them square off against each other is simply electric.

Even within its ambiguity, Garland gladly leans into the horror genre and embraces the possibilities of making a film that welcomes supernatural elements. “Men” showcases some memorable special effects and gruesome make-up that will both surprise and shock its audience, especially within the film’s stunning third act. It also contains some of the best and most disturbing sequences of body horror in recent memory, that will linger in your mind for days.

“Men” has a lot of messages and meanings that audiences can take from it, which will surely marinate in one’s mind for days and maybe even result in multiple viewings. Garland has layered it with religious, spiritual, gender, and mythical elements, speaking about the power dynamics between men and women over time. The film, at its core, is about what men want from women and how that serves as the catalyst for men’s violence against women, which is harsh, unnerving, and incredibly terrifying. And the images only further encapsulate that. After all, what is more horrifying than the voyeuristic sentiment of a woman being watched by a man in the distance?