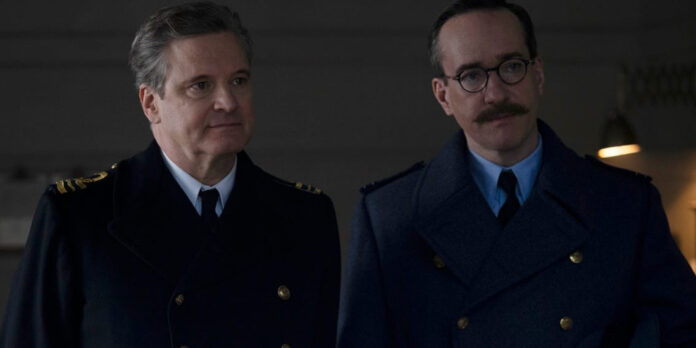 THE STORY – Operation Mincemeat is set in 1943 as the Allies are determined to launch an all-out assault on Fortress Europe. But they face an impossible challenge – to protect a massive invasion force from entrenched German firepower and avert a potential massacre.
​
THE CAST – Colin Firth, Matthew Macfadyen, Kelly Macdonald, Penelope Wilton, Johnny Flynn & Jason Isaacs

​​If one were to average the subgenres of all films from the past century or so, it wouldn’t be too surprising to see that many of them are World War II flicks. Practically every possible moment, battle, and location of the war have been covered in film, to the point where it may seem like no new angle could be found. “Operation Mincemeat” hopes to shed light on what’s been called one of the most extraordinary acts of deception executed during the war. In doing so, the film examines a less explored aspect of the European Theatre. While its espionage elements are intriguing, it never rises above the rudimentary way the story is being told, often falling into perfunctory, easily anticipated story beats.

It’s 1943, and England is firmly entrenched in its fight against the Nazis and their collaborators. The Twenty Committee, a counterintelligence operation of MI5, is tasked with devising a way to trick Germany into thinking that Britain’s next invasion will occur in Greece rather than their true destination of Sicily. To accomplish this, a small group of military personnel comes up with the idea to drop a corpse off the coast of Spain carrying papers that falsely mislead the Nazis into thinking that the nonexistent Greek invasion is imminent. Completing this somewhat bizarre task, cheekily named Operation Mincemeat, proves to be a much more in-depth affair than what might be expected.

Ewan Montagu (Colin Firth) and Charles Cholmondeley (Matthew Macfadyen) are the two men in charge of this secret mission. Both actors portray their roles with appropriately stiff characterizations, but these skilled performers still find ways to make their characters feel lived-in and varied. Macfadyen stands out with his charmingly awkward line readings and physical choices, which only make his bursts of boisterous authority all the more surprising and impressive.

The surreptitious plan being put in motion by the task force proves to be a fascinating plot that lends itself well to film. Notably, an entire backstory, romantic history, and personality traits are shown being put together for this nonexistent soldier, which the all-important corpse will unwittingly take on. Smartly, the film doesn’t shy away from delving into some of the ethical conundrums that arise when conscripting a dead person. It’s a scheme fit for a spy novel, which the movie clearly knows as the author of “James Bond,” Ian Fleming himself, is shown to be a member of this counterintelligence organization. Played knowingly by Johnny Flynn, the film teeters on being too self-aware as Fleming is shown making observations about the secretive tactics and methods being employed in the name of Allied victory.

While the titular Operation is a fascinating diversion to watch being assembled, the rest of the film’s story is less interesting and disappointingly by the numbers. The team in charge of Operation Mincemeat begins to rub against each other in a predictable way as the film chugs along, leading to uninteresting arguments and cliché plot contrivances. Indeed, the female lead Jean Leslie (played by Kelly Macdonald, doing her very best with the material), mostly only exists to be a pawn in the mind games played by the men around her. Unfortunately, more of the film is spent on these side stories and interactions than the intriguing espionage-tinged parts of the film.

While the film manages to explore a part of World War II that is less well known to the public, “Operation Mincemeat” never entirely makes itself into an exceptional historical tale. Its intricate spy plot may intrigue, but it’s weighed down by the kind of undercooked human drama that seems inherently unimportant in the face of global war.