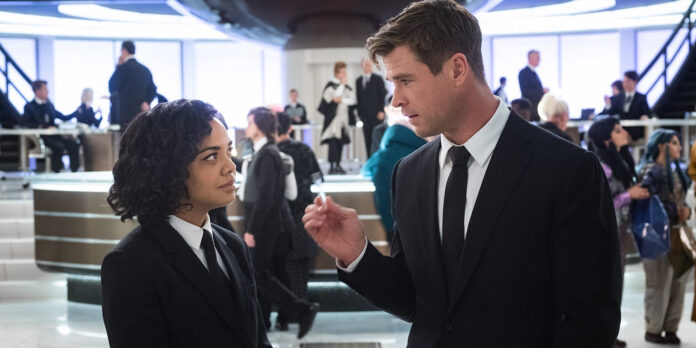 ​​​​A successful comic book, three movies, an animated television show, and now, a feature reboot. The “Men In Black” series has been through its fair share of up’s and downs. However, it mostly found success through the terrific comic pairing of Will Smith and Tommy Lee Jones through the first three films. “Men In Black: International” flips everything on its head, replacing its male lead with a woman and replacing its older, more strict, veteran agent with a young, handsome, arrogant and reckless agent. Already proving their on-screen chemistry with “Thor: Ragnarok,” Tessa Thompson and Chris Hemsworth return to our screens again to test if that chemistry can revitalize a franchise.

After a brief encounter with an extraterrestrial being in her childhood left her parents neutralized but her own memory intact, Molly now a grown-up adult (Played by Tessa Thompson), is a conspiracy nut, obsessed with discovering alien life and the mysterious group the Men In Black. After discovering the MIB base in New York, she meets the head of MIB’s U.S. branch Agent O (Emma Thompson), who assigns her to her first probationary mission in London. There, she meets the head of that branch, Agent T (Liam Neeson) and a young, reckless agent named Agent H (Chris Hemsworth). Together, they must protect a high ranking alien from a deadly alien race known as “The Hive” (Played by twins Laurent Bourgeois and Larry Bourgeois) but things become more complicated when they discover there has been a breach within their own branch from within.

A new location, a new cast, same galaxy, new problems. What made the first “Men In Black” film a success other than the genius pairing of Will Smith and Tommy Lee Jones, was also the film’s many surprises. Aliens hiding out in human’s bodies, talking dogs, grotesque creatures with amazing practical makeup effects and more. With “Men In Black: International,” other than a change in location, the film never holds us in suspense or a sense of wonder. It relies on its already tired and established formula from the previous films, recycling old jokes and never providing us with any strange new worlds or intriguing characters we can fall in love with (With the exception of Pawny, a small CGI creature devoted to serving Agent M, played hilariously by Kumail Nanjiani). It all feels very rote and by the book which is a shame because at least with his last film (“The Fate Of The Furious“), F. Gary Gray was able to instill a sense of kinetic energy and enthusiasm in every scene and action set piece. Here, it feels like the diversely talented director is running on auto-pilot throughout. The film’s insistent use on visual effects for the alien creatures over the more realistic application of makeup and hairstyling, also occasionally robs it of its realism and kills our sense of wonder rather than enhancing it.

Is “Men In Black: International” an outright disaster? That answer will depend on how well you respond to the on-screen chemistry between Tessa Thompson and Chris Hemsworth. The two talented actors certainly know how to play off one another effectively and it’s clear that they’re both having a blast on set together. Thompson carries the picture with confidence, although it’s a bit odd that she is suddenly so great at everything in the world of MIB considering this is her first probationary assignment. I understand she has been studying alien beings and the secret society that is the Men in Black for years but does that explain how she can utilize every gadget and piece of machinery, without at least showing us a training montage sequence at the beginning of the film? Hemsworth also, for all of his natural comic timing, mannerisms and quickly uttered one-liners, is hit or miss throughout. He’s often too loose and all over the place with his humor, making it tough to figure out how much of what he was doing was improvised or scripted. And normally that wouldn’t be an issue if everything was landing properly and generating the appropriate amount of laughs from the audience but that’s simply not the case here. Even a significant reference to his iconic character in Thor later on in the second act does not land with as much power as it should, which should tell you something about how this movie has failed to captivate its audience early on.

There never really appears to be a guiding hand throughout “Men In Black: International,” showing us that this story was under full and complete control from the start. It feels like the filmmakers wanted to hit the necessary and expected beats of a “Men In Black” film but considering this was a reboot and a chance to take the formula and put an interesting spin on that which already felt so familiar after two previous sequels, this can’t help but feel like a complete and total let down. Not even the comic re-pairing of Tessa Thompson and Chris Hemsworth, coupled with other hilarious turns from Kumail Nanjiani and Emma Thompson could save this from being yet another forgetful Hollywood cash-grab.