“THE SECRET LIFE OF PETS 2” 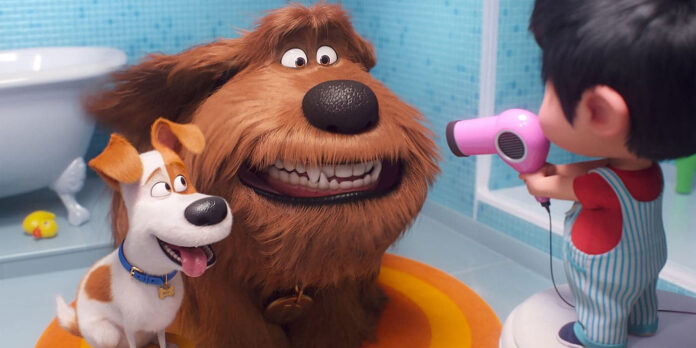 THE STORY – Max the terrier must cope with some major life changes when his owner gets married and has a baby. When the family takes a trip to the countryside, nervous Max has numerous run-ins with canine-intolerant cows, hostile foxes and a scary turkey. Luckily for Max, he soon catches a break when he meets Rooster, a gruff farm dog who tries to cure the lovable pooch of his neuroses.
​
THE CAST – Patton Oswalt, Eric Stonestreet, Kevin Hart, Jenny Slate, Tiffany Haddish, Lake Bell, Nick Kroll, Dana Carvey, Ellie Kemper, Chris Renaud, Hannibal Buress, Bobby Moynihan & Harrison Ford

​2016’s “The Secret Life of Pets” was basically the animated version of one of those movies based on a Saturday Night Live sketch: A clever idea that made for a hilarious trailer that wasn’t able to sustain itself for the running time of a feature film. 2019’s sequel “The Secret Life of Pets 2” is basically the same thing, except that it’s using the same clever idea from 2016, which was already exhausted by the first film. Somehow, the creative team was able to come up with just enough new variations on this theme for the opening twenty minutes or so to be kind of fun, mostly thanks to the introduction of a new character: Liam, newborn son to our hero Max’s owner, Katie. The movie had me on its side within seconds, as Max narrates that he absolutely hates children before becoming enamored when he has one “of his own”. And we get an enjoyable montage of Liam at first terrorizing and then enjoying and imitating Max and Duke, the big shaggy brown dog Katie adopted at the end of the first film. This is about as good as “The Secret Life of Pets 2” gets, in that it encompasses all the (few) things the film does well – mostly animal-centric sight gags.

And those sight gags are fun! When Katie brings Max to the vet because he has developed a nervous habit of scratching himself from worrying about Liam’s safety, we get to meet a bunch of animals with silly psychological “issues” that we would imagine them to have, or that we would have guessed they have from watching our own pets or our friends’ pets. This is cute and fun. But the storylines the movie farts out for the rest of the cast from the first film are much less so.

For some reason, while Max is off at an upstate farm learning how to face his fears from a sheepdog voiced by Harrison Ford, we get two subplots back in the city that don’t fit together with the main plot at all: Pomeranian Gidget, tasked with guarding Max’s favorite toy, must retrieve it from the apartment of an old lady who has dozens upon dozens of cats, while Snowball the bunny is called upon (as his superhero alter ego Captain Snowball) by a cute dog named Daisy to free a white tiger cub from a malevolent Russian circus owner. The first problem, of course, is one of the timelines. While the main plot with Max must take place over the course of two or three days, both subplots only take a few hours at most. Blessedly, the creative team (carried over from the first film) do not try to pad the subplots with extraneous material. However, in lieu of that, they both just stop cold while the main plot wraps up so that everything can attempt to come together for the big finale. Which is a problem when the only plotline that has any stakes at all is Snowball’s tiger rescue, which also (thankfully) happens to be the most fun, solely due to the voice performances from Kevin Hart as Snowball and Tiffany Haddish as Daisy.

And that brings us to the second problem. Outside of Hart and Haddish, none of the voice performances really spark. Patton Oswalt is fine as Max, but Ford is noticeably phoning it in, Jenny Slate relies on her voice’s unique timbre to give Gidget something approaching a personality, Lake Bell is given nothing to do and gives nothing in return as the cat Chloe, and Eric Stonestreet is given even less to do as Duke. Basically, everyone is doing the bare minimum, but Hart and Haddish have voices so full of personality even at their lowest setting that they can’t help but sound fun.

And that’s the key phrase here: the bare minimum. “The Secret Life of Pets 2” does the absolute bare minimum it has to in order to keep children entertained and not waste adults’ time. It moves quickly, effortfully making sure you chuckle along the way and wraps itself up in a drab little bow with a message about how acting brave will eventually make you actually brave. There’s not a whit of sophistication to be found anywhere, nor even a hint of subtlety, and only the barest sliver of an emotional hook. Which makes it fine for the kids in the audience, but what about the adults?