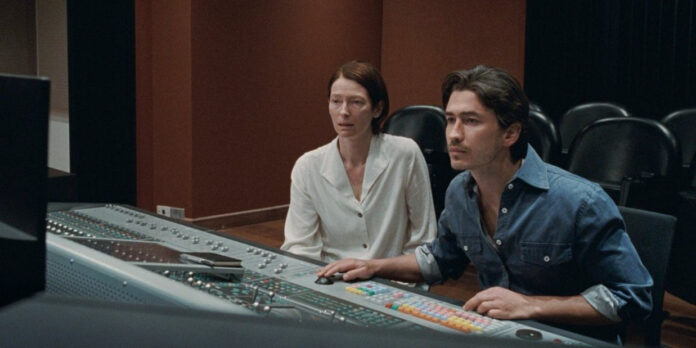 The work of Thai director Apichatpong Weerasethakul has never entirely been able to register with audiences outside of the festival circuit. He has amassed universal critical acclaim since he graced the Cannes Riviera in 2004 with “Tropical Malady.” He created gaps between his feature films by creating several short films, some of which eventually are spawned into feature-length, such as the 2009 short “A Letter to Uncle Boonmee,” becoming the 2010 Palme d’Or winning “Uncle Boonmee Who Can Recall His Past Lives.” Now in 2021, Weerasethakul is stepping outside of his native Thailand for “Memoria” (translated from the Latin word “memory”), which prompted another return to Cannes, this time netting him the Jury Prize.

The first English-language film for Weerasethakul, “Memoria,” is set in Colombia, following Tilda Swinton from destination to destination. The film opens with a surprising jumpscare illustrating our main character’s problem: she often hears a loud crashing noise that seems to be confined entirely within her head. This noise confounds her, leading to an investigation into what exactly it is and why it is happening, which puts her in contact with a sound engineering student, a morgue doctor, and a strange fisherman offering profound insights on memory and identity.

Those familiar with the work of Weerasethakul will know that the plot is not the driving force behind the ultimate narrative. Instead, the visuals and sound work do the bulk of the heavy lifting. Within “Memoria,” dialogue is seldom found for long stretches at a time, leaving the viewer to look at the screen like one would look at a painting, soaking in as much information as possible. This restriction of information will irritate those looking for answers to the questions the film raises, which Weerasethakul doesn’t intend to address. The Cannes World Premiere garnered nearly fifty walkouts from disgruntled viewers. Several nodding heads from the slow pacing were often re-awakened by the mysterious crashing noise, which shook the theatre with its thundering sound.

Swinton acts less like a character and more like a wandering observer. Never shot in closeup and always present in the world around her, she moves from place to place, learning new information about her condition, all without much dialogue from her end. The film’s first half is where Swinton does most of her traveling, which keeps the film moving steadily, yet still at a glacial pace. Much of the “action” within these journeys would be considered filler in most mainstream projects, such as Swinton waiting patiently for the sound engineer to finish his work before addressing her or an unbroken take consisting solely of car alarms going off.

The last hour of “Memoria” is where some will applaud, and others will boo (just as they did at the world premiere). Swinton’s final journey takes her to a remote village housing a fisherman who claims to remember everything about his life. The two of them engage in an extended conversation that explores the strange connection they share. To an extent, the conversation acts as a vessel for Weerasethakul to talk to his audience about his ideas about cinema and life. It’s a bold move by the director. One that can reshape how you look at the world at its best and teeters on self-aggrandizing at its worst. Weerasethakul ties his thesis up in a perfect bow with an ultimate answer that is fittingly incomprehensible and produces several more questions.

“Memoria” is a masterwork for the most devoted of movie fans who need an escape from the noise of the modern world. It’s wildly beautiful and imaginative, challenging your patience and outlooks on life and death. Go in with an open mind, and you may find yourself enlightened by what Weerasethakul is offering in his most accessible (although that’s not saying much) film yet.