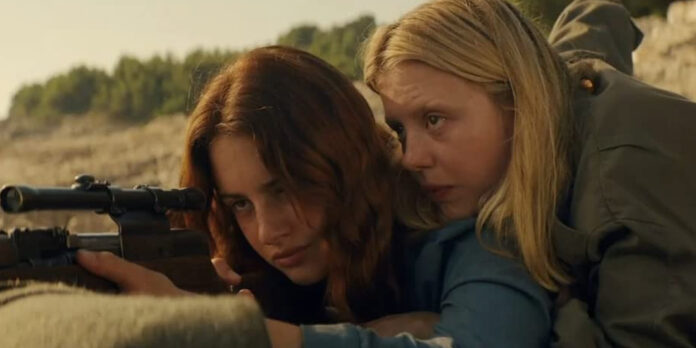 THE STORY – A young woman is transported to another world where a never-ending war is raging. There, a clutch of women lure men to their deaths at sea via radio transmissions, like 20th-century sirens. She soon realizes she’s not the killer they want her to be.

​​​Reality isn’t always what we may have hoped for, and sometimes we all wish we could live out our fantasies. In Karen Cinorre’s debut “Mayday,” an “Alice in Wonderland”-type rabbit hole leads to just that for one young woman who is tired of living in a world where abusive men always get their way. Though the film is filled with dreamy cinematography and fun performances, it doesn’t “go there” when it comes to getting to the root of what this feminist film is all about.

Ana (Grace Van Patten) is looking for an escape. Her thankless and abusive job, thanks to a boss who belittles and harms Ana any chance he gets, as a kitchen staffer is less than ideal, and she’s ready to break free. As she’s gearing up for a young couple’s wedding, a storm approaches and ends up being the ticket out of there that she’s been waiting for. A distress signal — “Mary-Alpha-Yankee-Delta-Alpha-Yankee” — calls out to her, the same one that she’s been hearing in vivid dreams, and through an oven, she plunges into deep, cool waters and comes up for air on a mysterious island.

Not only has she been transported to a new place, but to a different era too. A war is constantly raging — it’s never stated, but by the looks of clothing and gadgets, it’s World War II — and a group of women are living out their days luring soldiers to the island through distress signals. There’s Marsha (Mia Goth), the leader of the pack who was previously the bride in Ana’s pre-oven life, Gert (Soko), Bea (Havana Rose Liu), and June (Juliette Lewis), who also played another character in the past.

Ana doesn’t know how any of this is possible or if she’s even alive, but soon finds comfort among the girl group. Quickly taking a liking to Ana, Marsha reveals that the group’s mission is to kill any and all soldiers that come to the island and that she wants Ana to be their newest sharpshooter. At first, Ana joins in on the games and enjoys this newfound sense of power. But soon enough, she realizes that maybe this new way of living isn’t quite right, and her new mission becomes finding a way back home.

As far as badass women crushing the patriarchy films go, “Mayday” is a fun, fantasy ride. Once we make our way to the island, as morbid as the women’s jobs are, it’s a blast seeing them be unapologetically themselves and living out their days on this idyllic island. Goth, in particular, as the strong-headed, unstoppable leader, is charming, even though she’s a bit diabolical. Throughout the film, Van Patten, who comes into her own, gains more confidence in herself, learns how to stand up to people, and shows that she’s no damsel in distress. There’s also a good sense of humor in the film at times. In one scene, in particular, Marsha says Ana doesn’t appreciate everything she’s done for her, mainly in making Ana a “hero.” Ana, in return, says Marsha has done nothing but turn her into a psychopath. Marsha shouts, “It’s the same thing!” with eyes wide, which will surely get people laughing. And when Lewis appears as an unruffled recluse on the island, there are even more funny one-liners.

The film’s weak point is that it doesn’t take enough time to develop key ideas or stray from anything besides its core plot. Once we’re thrust into the mysterious island, audiences are expected to accept this place for what it is and not question where it’s located or why things work the way they do. Aside from four women who share tidbits of their lives, if they can remember where they were before the island, we’re left with surface-level information that doesn’t allow us to form much of a bond with them. And though it’s great to see women kick butt, we’re left wanting more than seeing them as killing machines. Everyone, except Ana, can’t remember their past, but one thing they do know is that men have hurt them at some point. At times when the film could have discussed why society treats women so poorly and what needs to change, it instead chooses to resort to violence. Perhaps Cinorre didn’t want to make a deep, philosophical film about women in society, but it wouldn’t have hurt to go deeper into the subject.

If you watch “Mayday” and don’t ask too many questions, you’ll enjoy it quite a bit. Van Patten and Goth are a strong duo who, whether they’re best friends or at odds with each other, play well together. And as a revenge fantasy type of film, there are satisfying moments when awful men get punished. But if you’re looking for something that takes on a more critical look at patriarchal societies and how women can truly fight the system, you’ll have to send out an SOS.