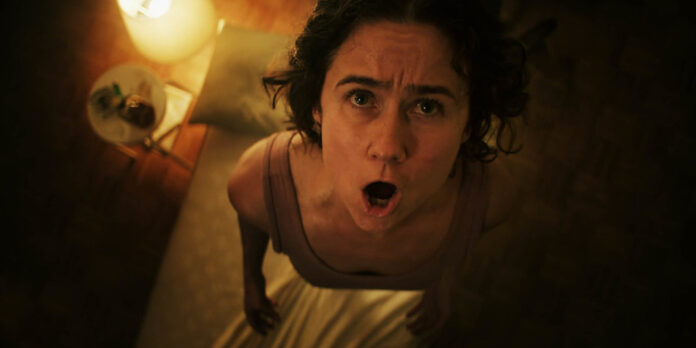 ​​​”Knocking,” the feature debut from director Frida Kempff, fits neatly into the modern cinematic trend of the patient, psychological thrillers that place you squarely in the perspective of the main character. Of course, this makes the film excitingly personal and claustrophobic, as it pushes the empathic abilities of filmmaking to the max. But mainly, “Knocking” can’t quite rise above its inherently captivating premise to deliver something truly groundbreaking.

Molly (Cecilia Milocco) is a young woman who, after a recent tragedy, finds herself in a psychiatric hospital. Upon her release, she starts a new life in an apartment building. But her new life quickly descends into terror as a mysterious knocking sound above her head torments her more and more every night. She tasks herself to find the root cause of the stressful sound to save the person above her.

The actress bringing Molly to life excels at the difficult task laid out before her. The audience is with her for practically the entire movie, oftentimes with Milocco’s face in tight close-up. Without her playing the part with varied emotions and moments of discovery, the film would drown in repetition given its simple premise. At times, the camera is literally strapped to her body, forcing the audience to view the story’s trajectory merely through her reactions to the events around her. It’s tricky work, but Milocco bounds through the film with the ease of an Olympic gymnast. She’s by far the biggest reason to see the movie.

The film’s concept is intriguing, but unfortunately, it’s so simple that it barely has enough substance to fill out its slim runtime. Milocco does a lot of heavy lifting to keep the film’s momentum interesting, but even with her superlative abilities, the film’s evident and unrelenting pattern is tiring. And while this may be intentional to highlight the film’s themes and further place the audience in the main character’s headspace, it still feels inert in its narrative trajectory.

To call “Knocking” a slow burn is both obvious and apt. It strikes a mournful tone, which is effectively complemented by its lead performance, but regretfully, the film rarely moves beyond its initial concept to share something new with the audience.