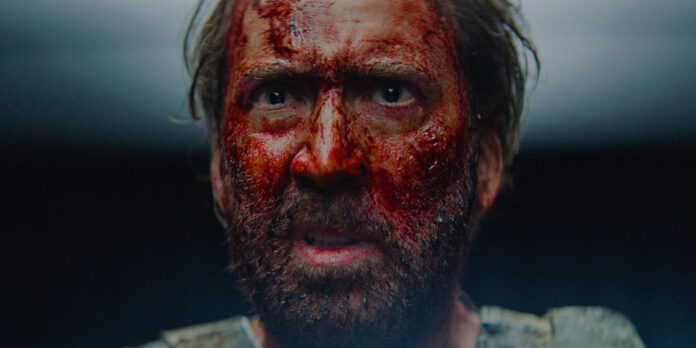 THE STORY – Bubbling up from somewhere in the realm of madness and chaos comes the eagerly awaited latest from grandiose filmmaker Panos Cosmatos. Somewhere in the primal wilderness near the Shadow Mountains in the year 1983, Red Miller (Nicolas Cage, in an adrenaline-inducing performance) has fallen deeply for the beguiling Mandy Bloom (Andrea Riseborough). But the life he has made for himself comes suddenly and horrifyingly crashing down when a vile band of ravaging idolaters and supernatural creatures penetrate his idyllic paradise with vicious fury. A broken man, Red now lives for one thing only—to hunt down these maniacal villains and exact swift vengeance.

​​​​I walked out of “Mandy” practically unable to describe what it was I had just seen. Is it a metaphor for something larger? Is it a grindhouse B-level, campy flick destined to become a cult classic? Is it the greatest LSD movie since “Enter The Void?” Is it the film which contains probably the best Nicholas Cage performance from the last decade? The answer to all of these is yes. I have no earthly idea what other ideas are inside the mind of writer/director Panos Cosmatos but there is no denying that “Mandy” is a unique experience that borders on being maddening (Especially the first 80 minutes of this excessively long two-hour film). This is exactly the kind of film the Midnight section at Sundance was designed for. I’m not entirely sure who the audience is for this kind of bonkers film is, but I know it exists.

Taking place in 1983 A.D., Red Miller (Nicholas Cage) lives a peaceful existence in the wilderness with his wife Mandy Bloom (Andrea Riseborough). However, their lives are disrupted by a religious cult of whackos led by Jeremiah (Linus Roache) who leave Red for dead and his wife a pile of ashes. Hell-bent on revenge, Red seeks out to find the ones who wronged him and bring them to painful bloody justice.

No other film at Sundance prompted as many walkouts as “Mandy” did. For the first 80 minutes of the film, it is almost entirely inaccessible. The relationship between Nicholas Cage and Andrea Riseborough is built up well enough so that when things go up in flames (literally), the results are devastating. The result of such disturbing madness is the emotional, batshit crazy performance from Nicholas Cage who turns it all the way up to 11 in this film but luckily for him, the style, genre, and direction by Panos Cosmatos allows for the actor to “go there” as opposed to feeling out of place and open to ridicule. Those who are fans of the actor and his crazy antics will find a lot to enjoy here (Watch out for a scene where a screaming Nicholas Cage downs an entire bottle of liquor in one take in his underwear). However, having to suffer through the first part of the film is practically torture. The pacing is excruciatingly slow. The actors deliver cryptic dialogue which makes absolutely no sense. The only saving grace is whenever Nicholas Cage is on screen and the fact that every single frame of this film is designed to make you feel like you’re high while watching it.

With an 80’s influence for heavy metal and all things rock and roll, “Mandy” throws everything at the audience, including the kitchen sink. Cocaine, porno, tigers, chainsaw battles, animated dream sequences, and bloody ax-wielding are only some of the elements contained within “Mandy” which will unlock something gleeful in your lust for blood and mayhem. There are also a number of pleasing visual aesthetics including a saturated color palette (With an emphasis on the color red) and a large amount of grain. The electronic 80’s influenced score by composer Johan Johansson also helps to provide the film with a great deal of atmosphere throughout.

As one character says at one point during “Mandy,” there is something “strange and eternal” about it. That doesn’t even begin to scratch the surface of how out of this world insane this movie truly is. It already feels like a cult classic in the making but the long and arduous first two acts might be enough to prevent people from even seeing the blood-soaked revenge of the third. Nicholas Cage fans will surely be pleased. Those looking for a trippy cinematic experience will definitely get their fix. The rest of you? Yeah, you’ll probably hate it.