Making The Case For “Parasite” 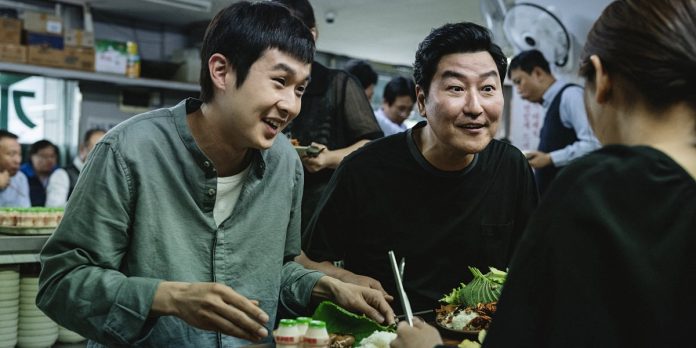 Last year, it felt like Alfonso Cuarón’s “Roma” would make Oscar history by becoming the first foreign-language film to win Best Picture. Sadly, it didn’t end up taking home the big prize, so now we’re left with the inevitable outcome of a different foreign film taking home Best Picture. However, I do believe, as I’m sure many other people do, that a foreign project released this year deserves to take home the highest possible award at the Oscars: Bong Joon-ho’s magnum opus, “Parasite.”

“Parasite” faces some tough hurdles in order to reach Best Picture, many that are similar to “Roma.” Before we get into those, I wanted to give a brief rundown of what specific awards I think the film should definitely be nominated for. “Parasite” easily moved its way into my number one spot of the year and I haven’t stopped thinking about it ever since I left the theater.

Now let’s get into some nominations I think “Parasite” deserves.

Considering the film is a deep dive into class warfare and how the different social classes view one another, it makes perfect sense that the Park family home is, well, practically perfect. While watching the film, you will often find yourself getting lost in the background of specific shots or whenever the camera is gliding through the halls or up and down the stairs, you find yourself noticing all of the finite details that went into the production design. While the Park home is the main focus of the film, the Kim home is also wonderfully designed.

There are some clear cut contrasts between the two main sets. The Park home is clean and organized, in comparison to the Kim home that is dirty and unorganized; so not only does the production design look outstanding, but it offers a bit more to the overall picture and puts it beyond just being good production design.

Best Editing (Jinmo Yang)
“Parasite” is as sharp as a knife in many different ways. One of the most notable cunning elements of the film is its editing. Not only are multiple different editing techniques at play during the film, but the editing plays a massive part in how the tension unfolds. The first half unfolds rather meticulously, much like the plan that the Kim family hatches. But the editing picks up quite a bit in pace once the narrative flips on its head and the stakes skyrocket.

This method and approach to editing is what sets “Parasite” apart from most other films I’ve seen this year. It holds a rather poignant bookmark at the halfway point and helps pack a powerful punch once the tables turn. “Parasite” masters all elements that are at work but the editing truly shines through.

Best Supporting Actress (Cho Yeo-jeong)
Bong is incredible at getting stunning performances out of his actors. Everything gets put on the line in his films and that really shines through from the performances. While the entire ensemble of the film is spectacular, there are a few performances at the core that truly hold the film together.

One of those performances is from Cho Yeo-jeong, who the foundation of the film is built upon. Without her character of Park matriarch, Yeon-kyo, the film would simply be an empty shell. Not only that, Yeo-jeong gives an absolutely riveting performance. The way she is able to shift the inflections in her voice across many different emotions in just a single scene is stunning. She delivers so much emotional depth in just a few glances or body movements that set the bar for the other actors. Her performance might be my personal favorite of the film, and with “Roma” setting the example for the surprise Supporting Actress nomination with Marina de Tavira, it’s definitely a possibility again this year.

Best Supporting Actor (Song Kang-ho)
Song Kang-ho is a frequent collaborator of Bong and anytime the two pair up, magic is bound to happen on screen. If only one supporting performance can be nominated, it should be his. Kang-ho is outstanding in so many ways. He brings a different complexity to his character of Kim Ki-taek, who is quite literally a polar opposite of the members of the Park family.

His performances are often incredible and subdued. This one is no different and he deserves some attention, not only as recognition for this film but as a recognition for his entire career. Kang-ho’s performance really helps ground us in reality as being an emotional center for the Kim family. Plus, he gives the best monologue of the year toward the end of the film that deserves a nomination on its own.

Best Director (Bong Joon-ho)
Bong has directed the best film of the year. His direction has always been razor-sharp, not only in the way he approaches getting performances out of his actors but also in the way that his films unfold methodically. Watching each scene of his films is like watching a painter’s strokes. The way he is able to utilize so many different techniques you wouldn’t normally see in a murder mystery, monster movie, or a class drama is just one aspect that makes his films so special.

We saw Alfonso Cuarón nab the nomination and the win last year and it’s very possible that Bong could follow down the exact same path. His meticulousness and obsession with detail is always a joy to watch unfold. Bong absolutely kills it with “Parasite” and nothing would make me happier than seeing him take home this award.

Of course, there are some nominations that I would also love to see happen: Best Original Score, Best Original Screenplay, Supporting Actress for So-damn Park and Supporting Actor for Choi Woo-sik. Obviously, the ultimate prize I would want “Parasite” to walk away with is Best Picture. It does have some obstacles to overcome, specifically the foreign language aspect. That was the main point of conversation for “Roma” and that stands here as well. But the ultimate question is, can “Parasite” win?

“Roma” and “Crouching Tiger, Hidden Dragon” have come the closest to the ultimate prize, but what separates “Parasite” from those two? I think they’re all the same level of quality, but personally, I would probably put “Parasite” above the other two.

“Parasite” achieves a social commentary that I think is incredibly relevant to the world today. “Roma” did the exact same thing, but The Academy didn’t feel the need to reward it the top prize. I think “Parasite” achieves the same level of social relevancy and at an opportune time, which could take it all the way to the top. Another thing that I firmly believe factors into the decision could be the overdue narrative.

The overdue narrative is something we talk about a lot and I don’t think it has been addressed enough here. Bong has a huge buy-in with the critic groups, which is where we will see this film absolutely thrive (as evidenced yesterday with its first win of the season from the Atlanta Film Critics Circle). But I believe that The Academy knows Bong has been killing it for years. Despite having never received an Oscar nomination in his career, “Parasite” has the potential to be a breakthrough. He’s done spectacular work in the past and he’s now crafted a film that easily serves as his best work to date, and one that has reached a global audience. “Parasite” is poised to make Oscar history and I believe it has the legs and the ability to do just that.

What Oscar nominations do you think “Parasite” will receive this year? Let us know your thoughts in the comments section below or on our Twitter account.