“MAIKA: THE GIRL FROM ANOTHER GALAXY” 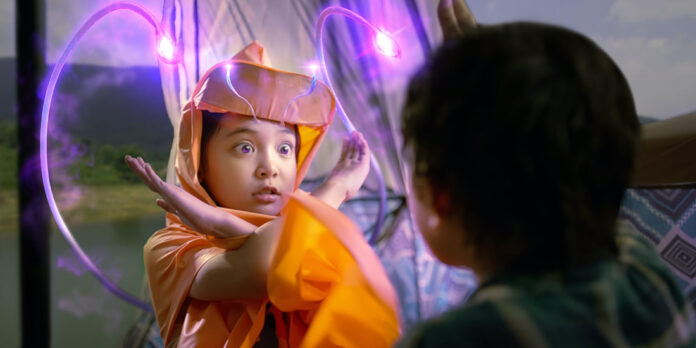 ​Loss is frequent in children’s movies, especially in the classic Disney animations that most of us grew up with. Frequently, characters are separated from friends, and parents die. Writer-director Ham Tran has both in his latest film, “Maika: The Girl From Another Galaxy,” but he hits the audience with the film’s heartbreak right at the beginning.

A mother lays in a hospital bed with her son asleep next to her. In narration, she tells him a bedtime story – and it will be her last. It is a tear-filled opener for eight-year-old Hung (Lai Truòng Phù). But the score feels hopeful, and the scenes to follow predict the fun-filled adventure the audience is about to embark on with him. We see Hung’s beloved toy plane, Comet, in a race with a neighboring kid’s drone. His opponent is Beo (Tin Tin), who, at first, seems like the villain of this tale. The script plays on the gluttonous villain trope in poor taste, but how their relationship changes makes up for it. The pair are adorable, and this sequence is a unique take on the violent, “Fast and Furious” style chases that cater to adults.

Unfortunately, Hung loses the battle. Comet, with a note from his mother written on the wings, crashes, and breaks. Symbolic of the pain that still lingers from his mother’s death Hung cries once again. Around the same time, Hung’s best friend breaks the news that she and her family are moving to Saigon. He keeps experiencing loss all over again, but thankfully, Hung has his dad (Ngòc Tuòng) there with him. He owns a shop where he fixes phones and computers and sells precious stones that hold a mysterious power. But young Hung blames himself for how hard they’ve been struggling since his mother passed, especially when it comes to money. It’s becoming too expensive to live where they do, but Hung doesn’t want to move because of the memories of his mother living there. However, one thing that brightens Hung’s spirits is the upcoming meteor shower.

In a moment where he’s thinking of his mother most, he looks up at the night sky to see a meteor fall to the earth below in a wondrous hue of purple electricity that blankets the city. As he recklessly decides to go off on his own to the crash site, he finds a young girl. When he needed his mother most, he met a friend, but not a human one. She’s an unnamed alien who has come to earth searching for her friend. Calling her by her planet’s name, Maika (Chu Diệp Anh), Hung, of course, is quick to offer his help. But when a rich space tech CEO comes into the picture looking for Maika, the kids learn that the task they’ve embarked on won’t be easily achieved.

“Maika: The Girl From Another Galaxy” feels like one of those Disney Channel movies you’d turn on after a hard fifth-grade day but wouldn’t finish because it’s way too long. The film is at its strongest when it focuses on Hung and Maika. Still, the writer-director also throws in an unnecessary subplot with a pair of lackeys who go around trying to convince residents of Hung’s neighborhood to move out. Their boss is a disgruntled building owner who impersonates a samurai. It appears that these side characters were added to get more laughter from its younger audiences perhaps, as, for example, those fascinated by samurai may find humor in these scenes, but it feels like a mockery of Japanese culture.

The film also feels very ‘Disney Channel’ in its score, as it shifts in energy with every movement and action Hung makes. The CGI is also not up to blockbuster standards, specifically in scenes where we see Maika in her original form and when she uses her powers; however, its use of color is sure to transfix the young viewer. It is also poorly edited at times, with inconsistency in its transitions and the film often jumps from the middle of one scene to another instead of letting one scene finish before moving on.

The film’s slapstick humor is very much catered to children, with all of its farts and beating the bad guys with kimchi. But it has an infectious amount of heart and light-hearted charm, full of enjoyable hijinks. The film turns a simple story about an alien’s journey home, in the vein of “ET,” into one about friendship, overcoming loss, and learning to heal. Loss is a universal experience that we all, unfortunately, must face, and movies like this prepare us for it and show we have the power to overcome it.