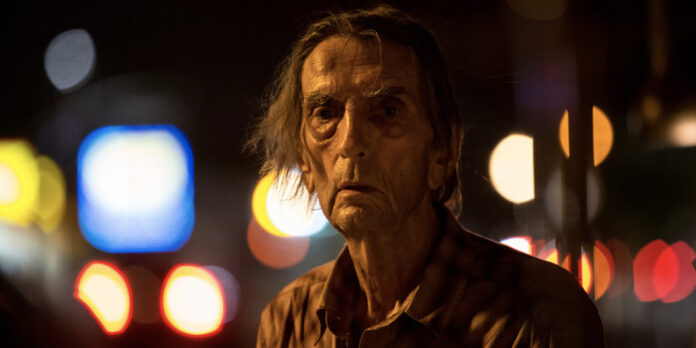 THE STORY – A 90-year-old atheist has outlived and out-smoked his contemporaries, and as he comes to terms with his own mortality, he searches for ever-elusive enlightenment.

It’s impossible to separate “Lucky” from its leading man, Harry Dean Stanton. More specifically, it’s impossible to forget that this was Stanton last film. In many respects, it’s hard to believe that he passed away in the same year “Lucky” was released. In doing so, Stanton left us with a lovely, beautiful goodbye letter. It’s honest, it’s fragile, and it couldn’t be a more fitting swan song.

“Lucky” follows the title character, played by Stanton, as he goes about his everyday life. He lives a simple life in the desert, with not much to his name. No kids, no wife (Or ex-wife for that matter). The film moves slowly, as does Lucky, moseying around town. It’s told essentially in a series of repeating vignettes, just as one might imagine an old man might live his life. He’s a man of habit: the same diner, sitting in the same seat, the same grocery store, the same bar every day. The film captures a great deal of emotion through the mundanity of Lucky’s life. Some of the most effective moments in the film are when he’s merely walking down a dirt road, or lying in bed. Lucky might have a simple life, but it’s his, and he’s content.

At least, he thinks he is. He’s got his routine to keep him alive. But soon he’s confronted with a scary reminder of his mortality when he falls out of nowhere. While talking to his doctor (Ed Begley Jr.), we see it dawning on him that he doesn’t have to get sick or have an accident to die. He’s old, and he’s not going to live forever. While watching with the inevitable context of Stanton’s death, this scene has a big impact. Lucky’s time, like Stanton’s was running out. What does that even mean for him? What’s going to happen on the other side?

These are the moments that shine in this film: Lucky, on his own, living his life and confronting the future. Other moments throughout the film can be a little clunky, especially the scenes in the bar. Long, drawn-out stories with unnatural dialogue and performances bring the film’s realism down a few notches. “Lucky” succeeds not when it’s trying to write meaningful stories for the side characters to tell, but when it instead lets Stanton show us Lucky’s story.

“Can I tell you a secret?” Lucky asks a waitress who came to check on him. “I’m scared.” And why wouldn’t he be? I can’t help but wonder what Stanton felt as he delivered these lines. And that’s the greater gift of this film. Rarely do we get to see a man coming closer to the end of his time and confronting the fear of the unknown. And while that may sound dour or depressing, Lucky shows us the liberation in the realization of mortality. He’s not a broken man on his deathbed. He’s a man who realizes he’s really lived. Stanton gets a beautiful scene at a children’s “fiesta,” as he sings a Mexican folk song. His performance is subtle, internal, but proud in his own way.

It’s not a perfect film by any means and may feel a bit too slow for some, but it’s an uncanny goodbye for Stanton. “Lucky” is a lovely, small film. It’s an ode to living. A farewell to a well-lived life, and an acceptance of what comes after.