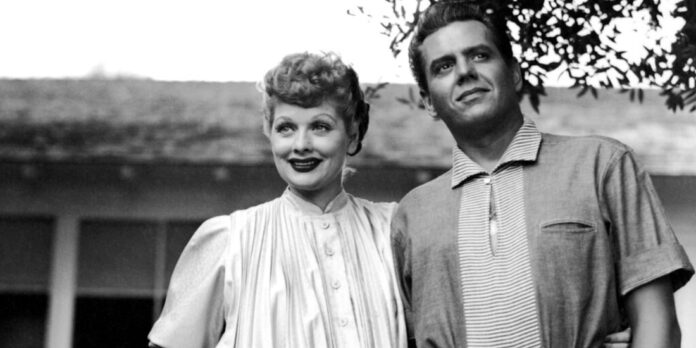 THE STORY – One day in 1940, two budding stars met for the first time in the RKO Pictures commissary, unaware that together they would change the face of pop culture. After surviving a tumultuous upbringing, a teenage Lucille Ball left her family for New York City, where she first found success as a model before moving to Hollywood to begin working in movies. Hailing from Santiago de Cuba, Desi Arnaz was a paid musician by 16 and quickly broke out as a multitalented entertainer. The two would go on to consistently challenge the status quo in entertainment both in front of and behind the camera.

Though last year’s “Being the Ricardos” might have reminded us how much we love Lucille Ball and Desi Arnaz and revitalized interest in one of comedy’s most iconic couples, there was only so much that Aaron Sorkin’s biopic – starring Academy Award winners Nicole Kidman and Javier Bardem as Ball and Arnaz, respectively – could cover, given that it only surveyed the pair over the course of a single week, as they weathered some of the weightiest struggles of their entire careers. Thankfully, Amazon Studios had another ace up its sleeve with Amy Poehler’s delightful documentary “Lucy and Desi,” as the picture, which will be available on their streaming service Amazon Prime alongside “Being the Ricardos,” comes across as the perfect companion piece to that Oscar contender, filling in the blanks left behind by the biopic and offering a more comprehensive dissection of this dynamic duo and the ups and downs in their relationship over the years. It may not break any new ground in the documentary genre, but it does right by Lucy and Desi’s legacy and effectively illustrates just how incredible their impact on the entertainment business was.

One of “Lucy and Desi’s” most significant strengths is how complete its coverage of the couple is, stretching from their very first meeting to Ball and Arnaz’s deaths in 1986 and 1989, respectively. At just over 100 minutes, we see almost all of the peaks and pains throughout their time together, perusing their professional and personal triumphs and troubles, but thoughtfully so. It’s easy to see where a less respectful filmmaker would lean into sensationalism and solely focus on the spectacle of the couple’s infamously stormy scuffles (most often related to Arnaz’s infidelity). Still, while Amy Poehler doesn’t shy away from the more hurtful parts of their history, she always does so with delicacy and decency while never letting it overshadow the sincere admiration and affection they had for one another. This is most notable in the doc’s continued consideration of Lucy and Desi’s lives after their 1960 divorce, with an extensive examination of the immense influence they still had on one another and how there was a spark between the two that would never be snuffed out no matter if they were married or not. Even after their fiercest fight, they still held the other in the highest esteem, and that was key to their astonishing success.

It’s also quite compelling to assess the exact construction of Ball and Arnaz’s comedy, both on “I Love Lucy” and related projects they took part in over the years. This was an area where “Being the Ricardos” excelled – scrutinizing comedy as if it were a science, breaking down the balance of craft and commerce – but we’re allowed to investigate that act of creation in more depth here, discussing what made Ball and Arnaz different and why they flourished where others failed. This analysis is aided by direct archival narration from Ball and Arnaz (accompanied by archival footage) that enables them to share their own stories instead of relaying them through alternative sources. It’s stirring to see how both defied so many societal standards of the time (Ball by not being afraid to be “ugly” in her bits and bucking the basic image of a leading lady and Arnaz by succeeding in a white-majority industry despite the ever-present prejudice), and even more enlightening to hear it straight from those who experienced it. With that being said, Poehler does bring in some inspired supplemental interviewees who definitely drive home just how expansive the effect they had on comedy was, with Carol Burnett and Bette Midler, in particular, emphasizing exactly how much Ball meant to aspiring female comics.

Where “Lucy and Desi” slightly stumbles is its rather conventional construction as a documentary, which, while not subpar by any means, is nowhere near as creative or captivating as the comedians it’s centered around. There are fewer “talking heads” than usual – thanks to allowing Ball and Arnaz to (mostly) talk for themselves – but they’re still there, from the aforementioned Burnett and Midler to the couple’s daughter Lucie and various other personalities who the couple came across while working in the business. Additionally, the straightforward structure (chronicling their relationship from start to finish) and simple style (archival footage/photography + narration) is serviceable if somewhat stale, and some segments don’t always inspire the same amount of attention and engagement as others. Thankfully, these beats are few and far between, and the doc as a whole is relatively riveting thanks to Poehler’s close connection to the material and some special footage she was shown, but it is clear that there could have been a bit more “flavor” to the film when all is said and done.

Still, regardless of how it gets there, “Lucy and Desi” ultimately succeeds at what it sets out to do – tell the story of Lucille Ball and Desi Arnaz (almost) in its entirety and not only remind audiences of how incredibly influential they were to comedy but also show them why. It pretty much perfectly captures their two powerhouse personalities, with their strengths and shortcomings intact. Given that the documentary is such a labor of love for Poehler, it’s imbued with so much sincere reverence and respect for the couple, which is convincingly conveyed to viewers, making the passion many hold for these two that much more palpable. It may not be some earth-shattering exposé on Ball and Arnaz that makes us see the twosome in a new light, but it doesn’t have to be, and that’s not what it wants to be either. It’s simply a wonderful way to remind the world of the paths they paved for modern-day comedy and all the obstacles they had to overcome so that today’s comics don’t have to – and by those merits, it’s an indisputable home run.