Looking Back On The Original “Invisible Man” 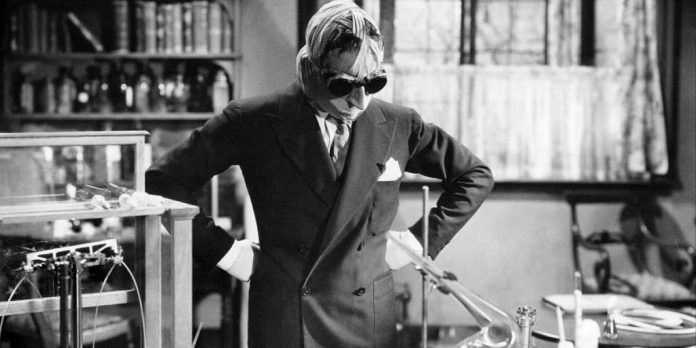 By Josh Parham
​
​The upcoming release of “The Invisible Man” has stirred many feelings within me lately. There’s a genuine curiosity to see what Universal has in store for this quasi-reboot of its notorious Dark Universe franchise. There’s also a general annoyance at the continued pace at which Hollywood seems destined to keep remaking its own previously produced properties. Of course, there’s also a feeling of excitement to see a great actress like Elisabeth Moss hopefully be able to showcase once again the presence she has as a performer. However, above all else, this new film mostly recalls my nostalgic memories for the 1933 original

I’ve written before about how, even at an early age, classic films were a subject I took great interest in. This was particularly the case with older horror and science-fiction films and the ones I had the most affection for were the Universal Classic Monsters. Films like “Dracula,” “Frankenstein,” “The Wolfman,” and so many others I absolutely adored – I couldn’t get enough of them. I embraced the black-and-white quality along with a dated yet unique sensibility. Looking back, it was hard for anything to beat “The Phantom of the Opera,” but “The Invisible Man” came awfully close. In fact, out of all the early sound pictures that Universal released through the 1930s, “The Invisible Man,” in my opinion, stands head and shoulders above the rest.

The reason for this isn’t necessarily for the story. It’s a rather standard fare of a mad scientist whose experiments cause him to go invisible as well as insane, and the race to stop his reign of terror. However, the greatest asset the film possesses is Claude Rains’ commanding performance in the titular role. What’s impressive is that Rains hadn’t yet gained substantial experience acting in motion pictures. Ironically, his only other film credit before “The Invisible Man” was a silent movie made over a decade before this one. It’s ironic because those striking vocals are essential for this role to be successful since the premise renders the character to be completely covered in bandages or not seen at all. Rains provides an astounding performance that’s all through his voice, and whether comedic or terrorizing, he’s always engaging.

​The other element to the success of “The Invisible Man” is the sensibilities of its director. In an era of major studio filmmaking, where it was sometimes difficult for a filmmaker to give their own wholly unique imprint, James Whale managed to leave an indelible mark on anything he touched. Whale, who also directed “Frankenstein” and “The Bride of Frankenstein,” understood the balance between unsettling horror and dark comedy. Indeed, “The Invisible Man” has both, often simultaneously. One can’t help but join the infectious Claude Rains in laughter, even when he’s murdering people in cold blood. Given the time period, nothing depicted is ever too graphic, but the intention is often more chilling than one would expect. It’s a testament to Whale and his ability as a storyteller to find inventive ways to keep his stories interesting, even if they were about invisible men and resurrected manmade monsters.

One more thing that makes “The Invisible Man” such a fascinating watch is how impressive its visual effects are. In these modern times, making pieces of a person’s body disappear is a relatively simple task that even the most amateur of effects are can accomplish. However, technology to green screens and computer programs weren’t available back then, so to see these effects in this film is truly awe-inspiring. There’s obviously some stuff that looks worn around the edges, but given the complicated nature to pull off these images, it’s mightily impressive. Despite being almost ninety years old, one can still be stunned witnessing what was achieved using in-camera trickery.

Endless sequels aren’t a product of our modern times. “The Invisible Man” saw its fair share of derivative continuations, much like all of the films in this stable of classic horror pictures. Still, there’s a quality to this particular film that has endured on a personal level. The strength of its star and the tone brought about by the director make for one of the most entertaining movies to be produced from this era. It’s a film that I constantly return to and one I find myself utterly charmed and entertained by. It’s a product of a bygone era, one that I don’t expect its modern interpretation to approach. But if it can capture even a fraction of what the 1933 film did, then a good time must surely be waiting.

Have you seen the 1933 “Invisible Man?” If so, what do you think? Are you excited for new “Invisible Man” this weekend? Let us know your thoughts in the comments section below or on our Twitter account.