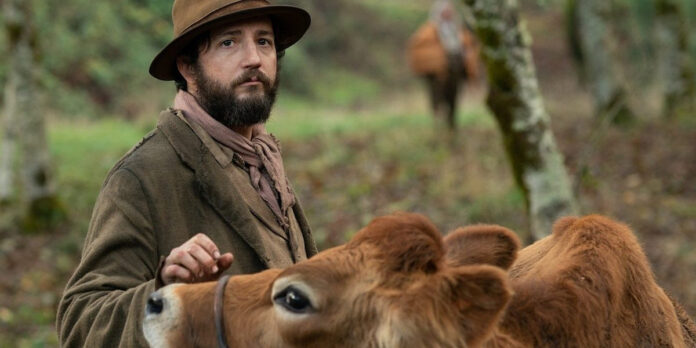 THE STORY – Two travelers, on the run from a band of vengeful hunters in the 1820s Northwest, dream of striking it rich — but their tenuous plan to make their fortune on the frontier comes to rely on the secret use of a landowner’s prized dairy cow.

​For a film set in 1820, Kelly Reichardt’s “First Cow” actually opens in contemporary Oregon with a shot of a large container slowly making its way upriver. Perhaps this is a representation of how far we’ve come in terms of technology or a way to demonstrate how the natural beauty of the landscape has been ruined. The film then follows a young woman who, while walking her dog, comes across a skull. She begins digging only to discover a pair of skeletal remains. Who these people were and how they ended up there is the mystery that holds the film together.

As openings go, this is an unusual one but that’s the beauty of Reichardt’s work: there’s always an aura of mystery and the unknown. Reichardt then sets the scene in the early 19th century, a time and a landscape that’s completely unrecognizable as it looks so far removed from our own. This is a land barely touched by settlers; it’s a tough but simple world. It’s also predominantly a masculine one, but there are individuals from all walks of life who have ended up at this settlement. It’s also a very real world. There’s a layer of dirt that clings to everyone’s clothes, and it’s a place where the people make their own shacks to live in. It’s also a world where the arrival of the first dairy cow and the prospect of having milk is kind of a huge deal.

The film is adapted from Jonathan Raymond’s own novel, “The Half-Life,” which tells this story on a much larger scale. However, Reichardt, along with Raymond, took a simpler approach with the on-screen adaptation. The narrative unfolds slowly, and this isn’t a film full of action. “First Cow” tells the story of two unlikely friends, the quiet and softly spoken Cookie Figowitz (John Magaro) and the savvy opportunist King-Lu (Orion Lee). The two of them cross paths when Cookie comes across a naked King Lu on the run from some Russians. Cookie happens to be traveling with a group of fur trappers (he’s their cook, hence his nickname), and while he could turn in King Lu, he decides not to. A bond between the two is formed, and when their paths cross again later, King Lu decides to invite Cookie to stay with him. Instantly, Cookie sets about tidying up the place, bringing back some flowers and sweeping up. A “The Odd Couple” kind of relationship between the two is quickly established.

With the arrival of a cow belonging to the colony’s English Chief Factor (Toby Jones), King Lu sees it as an opportunity to make money using Cookie’s talent for baking. Together they milk the cow in secret, and the two of them then use the milk to bake “oily cakes” which people can’t seem to get enough of. In one scene, the Chief Factor buys one, none the wiser, and comments straight after that the taste reminds him of London. Cookie worries about being caught, but only for King Lu to reassure him that men like the Chief Factor never suspect to be stolen from. So, with this get-rich-quick scheme in mind, the pair decide to make enough money to leave, but how long will they be able to milk this situation before all turns sour?

The beauty and power of “First Cow” lies in the performances from its two main leads. Magaro’s Cookie is a sensitive man who’s happy to take care of a baby in the middle of a bar fight. It’s a wonderful contrast to Lee’s smooth-talking, suave, and charismatic King Lu, and their scenes together are full of tenderness as well as witty banter. There’s an intimacy and gentle slowness to their scenes where we simply watch them go about their days together, with King Lu doing most of the scheming and Cookie tending to the chores. While there’s no clear indication of a romantic relationship between the two, the implication is there and it’s very evident that mutual respect for each other exists on a deeper level.

Reichardt, along with cinematographer Christopher Blauvelt, allows scenes to linger and breathe before cutting away, giving the viewer time to absorb every detail of the shot. “First Cow” is a beautiful film to gaze upon. Some may find this approach of storytelling frustrating, but in a world full of fast-paced, action-packed films, it’s an utter delight to have something so minimalist. The director herself has made the comment that her films are “just glimpses of people passing through,” and in the world of “First Cow,” there are many nomads simply passing through life. A lot can happen in a glimpse, and Reichardt shows us that every nomad has their own story to tell. Reichardt has woven a moral tale warning us against the perils of greed, but also the power of friendship, empathy, and companionship. It’s for this reason that “First Cow” is a film we should all try to seek out.