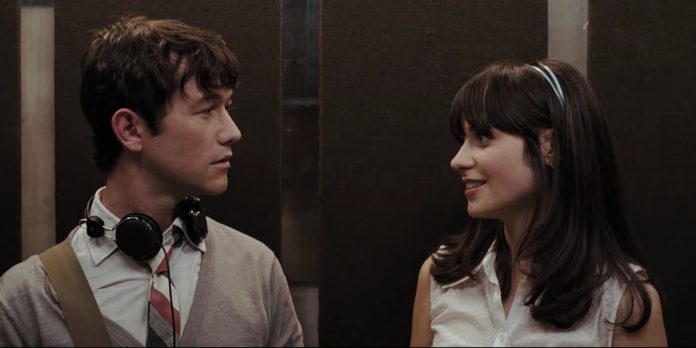 ​I am quite literally showing my age here, but I saw “(500) Days of Summer” when I was 13 years old. I was not a scholar; I was not a cinephile; I’m sure I was still watching Disney Channel Original Movies at least once a week and denying it if anyone asked. So I did not know the names of the tropes this film had set its sights on, but I did understand its essence. Children absorb our pop culture landscape just like adults do, except instead of analyzing, they take it as truth. This was the headspace I had when I walked into the theater that day, and I walked out loving it.

I do not think I would have been able to explain why “500 Days Of Summer” clicked with me so much at the time. I would have just said “I like Zooey Deschanel! It was funny! That scene where the screen was split in half was cool!” But now, I understand myself more, and I finally figured out why it stuck with me: “(500) Days of Summer” is primarily about when a girl speaks and nobody listens. Throughout the film, Summer’s words are never just taken as fact, but instead, they’re read into, hyper-analyzed, or even willfully misunderstood. This is a concept I am all too familiar with as a young woman, and it is somehow both surprising and not surprising that I was able to feel the difference in characterization even at such a young age.

Unfortunately, not all people saw the characterization in this way. I like to think of this film as the romantic comedy version of “Fight Club,” only instead of men fighting in their basements because they did not understand it, there were instead people crying on the internet about how Summer led Tom on. Joseph Gordon-Levitt has even taken to Twitter in the past, pleading with people to take a second look before walking away with the wrong message. Over the last 10 years, more people have been taking a different stance: now, the film itself is P-R-O-B-L-E-M-A-T-I-C.

It is a description that the film was probably destined to get saddled with, but neither of these opposing camps are seeing the point. The film was never trying to make a love story. It was meant to create a deconstruction of the manic pixie dream girl.

The deconstruction of this trope is not a new idea, neither in its existence nor in its application to “(500) Days of Summer.” The trope itself got its name in 2007 after Nathan Rabin lamented Kirsten Dunst’s character in “Elizabethtown” (which he has since apologized for), and shortly after that, audiences started seeing stories that centered on ways these tropes fail to capture real women. “Paper Towns” was a fantastically popular book written by John Green that came out in October 2008 which focused on a young man’s obsession with finding a missing girl, who he “pixifies” in his mind. Even earlier than that, films like “Ruby Sparks,” “Almost Famous,” and “Eternal Sunshine of the Spotless Mind” have female characters who reflect the manic depressive pixie girl characteristics back at the audience, and their unique traits mean more to the story than just existing in the name of quirkiness.

​No, “(500) Days of Summer” is not unique in trying to follow the thread of this overexposed trope to its natural end. But it is unique in being maybe the most popular piece of media to make that its core messaging. In this way, the films only sin rests in not taking its premise far enough. Joseph Gordon-Levitt’s performance is just a little bit too personal, a little bit too earnest to really root against him. The editing is also a tad bit too quirky (there is that word again!) to be anything short of delighted while you are looking at it. The music is also too conventionally romantic to ever feel an issue with the relationship on screen. In fact, there is a scene where Summer and Tom are looking at modern art, and Summer says “it’s saying so much by saying so little.” I wish this movie had not taken so much inspiration from this idea, and instead dared to say a lot by saying more than a little. But maybe we are the ones who failed “(500) Days of Summer” by not listening to it when it told us what it thought.

“Just because a cute girl likes the same bizarro crap you do, that doesn’t make her your soulmate.”

“I just wanna know you won’t wake up in the morning and feel differently.”

“Robin is better than the girl of my dreams. Robin is real.”

10 years after release, I have realized that this film’s plot and its reception are eerily similar. Just like Tom did not listen to Summer, we failed to see the point. So no, I do not think that Summer is a bad person, or that the film is problematic, or that it hasn’t aged well. If anything, our collective re-understanding of the film has only shown that we have aged better. And maybe next time a film, or more importantly, a woman, tells us what they are, we will believe them.