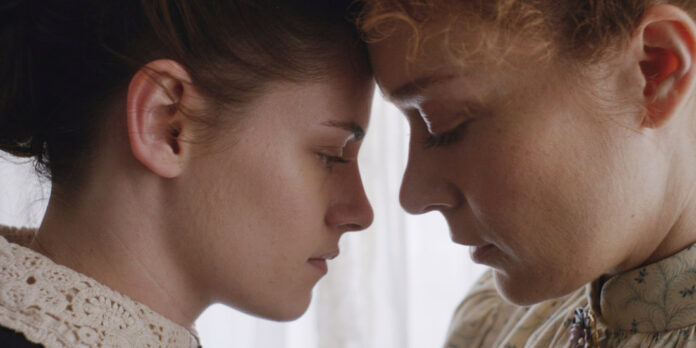 THE STORY – 1892: Headstrong Lizzie Borden lives with her wealthy father, stepmother, and sister in Fall River, Massachusetts. Lizzie lovingly tends to her pet pigeons and is occasionally allowed out of her dimly lit, foreboding house, but otherwise lives under strict rules set by her domineering father. When her family hires live-in maid Bridget, an uneducated Irish immigrant, the two find kindred spirits in one another. Their friendship begins with covert communication and companionship that blossoms into an intimate relationship. Meanwhile, tension builds in the Borden household, and Lizzie’s claustrophobic existence becomes increasingly more oppressive and abusive, leading to its inevitable breaking point.

​​​”Lizzie” is one of those films that feels so perfectly timed to the #MeToo movement that it’s almost impossible to view it in any other context. It contains two very phenomenal performances from its headlining ladies and presents an interesting story even if historical liberties are taken to show us what may (Or may not) have happened revolving around Lizzie Borden in 1892. For those unfamiliar with the story, they will find it both shocking and empowering. The film itself suffers from a few minor faults but as an exploration of one woman rebelling against the patriarchal society in her life, it’s a bold and bloody story.

It’s August 4th, 1982 in Fall River, Massachusetts. Two brutal murders have been committed within the Borden household. One is Andrew Borden (Jamey Sheridan), the patriarch who rules over the family name with an iron fist and the other is Abby Borden (Fiona Shaw), Andrew’s second wife. Their daughter, Lizzie Borden (Chloë Sevigny) is shocked as she calls their house servant Bridget Sullivan (Kristen Stewart) to call the police for help. The film “Lizzie” takes us back six months before the murders occurred to show us Lizzie’s relationship with her father, step-mother, uncle (Denis O’Hare) and her unique relationship with Bridget. All of these relationships play a role in piecing together just who exactly murdered the Bordens on that fateful day.

Lizzie is not to be messed with. As played by Chloë Sevigny, she is strong, intelligent and yes, definitely mad both mentally and at all the men in her life (In this case, her father and uncle). However, “Lizzie” explores what pushed this upstanding woman in society to break and possibly commit the murders which she was never officially charged with. Her father is portrayed to be the biggest asshole known to man (Or one could say, a stand-in for all man) who talks down to his daughter, forces himself upon women and is as cold as the film itself. This is all done expertly well by Jamey Sheridan (Who also played a great asshole type character in “Spotlight”) who makes it look effortless in getting us to despise him that when Lizzie finally does lash out against him in order to reclaim her inheritance and get her revenge for a lifetime of abuse, we are fully onboard with her and Bridget. Which leads me to Kristen Stewart. Pulling off an Irish accent and baring herself both of body and soul, I believe this could possibly be the best performance I have seen Stewart give yet. The film may belong to Chloë Sevigny but somehow Stewart is able to sneak up and steal the entire film from behind her. And when they are both on screen at the same time? The results are magic, as their impulses, confusion, and intimacy carries the film’s emotional weight.

Unfortunately, “Lizzie” does not get the highest recommendation from me. Its direction by Craig William Macneill is too cold and detached to allow us to fully engage with the events occurring on screen, including the sexual relationship between Bridget and Lizzie. It is both frustrating and disappointing at times that a 105-minute film can feel like a two and a half hour movie due to the film’s lack of urgency. It takes its time and it simmers with malice, making us wait anxiously for what we know is coming and when that scene finally comes, it is bloody worth it. The final scene is shocking and unforgettable in its brutality and coldness.

There are other elements which help to drive “Lizzie” to a positive score from myself despite my issues with the direction and pacing of the film. There is an acute emphasis on sound work here that brings forth a foreboding and menacing quality to the events which predate the murders. And it doesn’t stop there as the musical score helps to give “Lizzie” a gothic horror feel. Feminist, moody horror, true crime, period setting, all of these elements help to make “Lizzie” the female empowered gorefest that many felt “The Beguiled” should have been, despite them being cut from the same cloth.