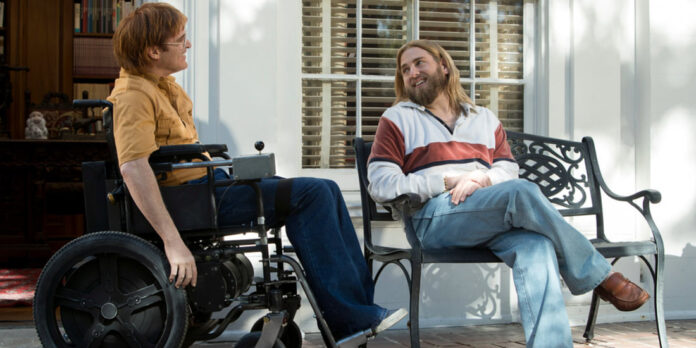 THE STORY – John Callahan has a lust for life, a knack for off-color jokes, and a drinking problem. When an all-night bender ends in a catastrophic car accident, John wakes up to the reality of being confined to a wheelchair for the rest of his life. In his journey back from rock bottom, his honesty and wicked sense of humor turn out to be his saving grace, as he makes friends with an oddball AA group, finds that love is not beyond his reach, and develops a talent for drawing irreverent and sometimes shocking cartoons.​

​​​​​Gus Van Sant is a very particular director in that he can go from directing masterpieces such as “Good Will Hunting” and “Milk” to complete, total and utter failures such as “The Sea Of Trees.” His latest film, “Don’t Worry, He Won’t Get Far On Foot” (A line said by one of John Callhan’s cartoon creations) falls somewhere in between as it is held up by an extraordinary performance from the always great Joaquin Phoenix and a pull-no-punches approach to alcoholism. Some have taken issue with the fact that Joquin is not a disabled person playing a disabled character but the film is less about that aspect of John Callahan’s life and more of a look at his personal struggles with alcohol which began long before his accident which left him a quadriplegic (At a Q&A following the film, writer/director Gus Van Sant addressed the issue sdaying how they would not have been able to use the same actor for the scenes pre-dating the accident if they had cast a disabled person in the lead role). It’s a journey through one man’s life (Originally supposed to be played by Robin Williams before both his and John Callahan’s deaths) told with humanity and a true respect for the inner battle he had to overcome.

John Callahan (Joquin Phoenix) is an alcoholic, who was abandoned by his mother as a child and lives in Portland Oregon. He loves to chase girls, go to parties with his friend (Jack Black) and has a soft spot for offensive jokes. His entire life changes for what at first seems like the worst when a dangerous accident leaves him paralyzed. Confined to a wheelchair and still struggling with his demons, John seeks help from Donnie (Jonah Hill), a gay-hippie sponsor who runs a self-help group and was also once an alcoholic. John is apprehensive at first to commiting himself to the 12 step program but when he meets Annu (Rooney Mara), a beautiful Stockholm flight attendant and discovers he has a talent for drawing cartoons which brings joy to people, John sets off to reclaim his life.

As stated above, Joaquin Phoenix is given an extraordinary opportunity to take us through all of John Callahan’s highs and lows. We see him before the accident, dependent on alcohol, partying and having a good time (Aka. being selfish). We see him in the hospital trying to come to grips with the reality of his circumstances after the accident and we also are with him as he wrestles with his demons on a 12 step path to recovery with the aid of Jonah Hill’s character Donnie. Which brings me to Hill. This is a very different kind of role for the comedic actor. He’s warm, inviting and sensitive. There are times where is performance comes off as catatonic at times but by the end of the film, the relationship between him and John Callahan feels earned and is quite moving. Jack Black (Who admits he looks like Burt Reynolds here) also surprisingly has a very dramatic scene in the film that reminds us once again how this other comedic actor can also be so versatile. The one who fares the worst is Rooney Mara, who to no fault of her own, is simply not given enough to do as John’s love interest.

As a fellow Portlandian, Gus Van Sant does a commendable job of establishing the setting, adding enough unique flourishes to “Don’t Worry, He Won’t Get Far On Foot” and bringing us into the mind of John Callahan. This is manifested by some of the actual cartoons themselves which we see play out on the screen in animated form. These cartoons are actually funnier than any of the writing given to the actors themselves and helps to establish how gifted Callahan was, even if he was not always perfect in targeting his humor. The score by Danny Elfman is also quite good at pulling at the heartstrings and adding more depth to this warm and hopeful story.

“Poor me, poor me. Pour me a drink” Donnie says at one point in the film. It’s very easy to see how the sympathy for John Callahan could be considered unearned due to his behavior and negative outlook on life. However, Phoenix goes a long way to getting us on his side and delivers a fully-embodied performance that ranks up there with some of his best work. The film itself struggles to find its rhythm here and there with a broken narrative structure that can be confusing at first but after the first half eventually settles down and allows us to connect with the characters better. “Don’t Worry, He May Not Get Far On Foot” may not be the best Gus Van Sant film but it is a good one.