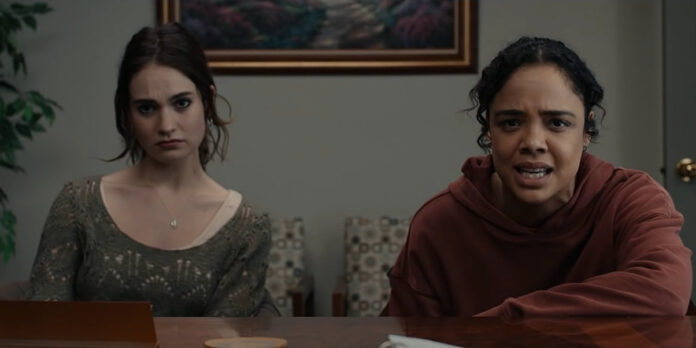 THE STORY – In North Dakota, two estranged sisters are driven to extremes when their mother dies, leaving them with one week to pay back her mortgage.
​
THE CAST – Tessa Thompson, Lily James, Luke Kirby, James Badge Dale & Lance Reddick

​​​​Nia DaCosta comes roaring out of the independent filmmaking world with a strong directorial debut in “Little Woods.” Her writing and direction are deeply empathetic towards her two protagonists, Ollie and Deb, played by Tessa Thompson and Lily James respectively, that we get sucked right into not just their own personal struggles but the deep-rooted desire within all of us, to simply survive.

Little Woods is a small town located in North Dakota that is caught in the middle of the opioid crisis. There lives Ollie (Tessa Thompson), a single woman who has been illegally selling prescriptions of oxycodone to the locals for years. However, on the last 10 days of her probation, she claims to be out until her estranged sister Deb (Lily James) comes to her with her own problems including an unwanted pregnancy with her ex, no insurance to cover it and a mortgage on their dead mother’s home which needs to be resolved in a few days time, or otherwise they will face foreclosure. Despite being adopted and not related by blood, Ollie and Deb both go outside of the law to get enough money to save their mother’s home and survive another day.

Not so much a crime/drug film as one would think, “Little Woods” keeps its story focused not just on its two lead female characters but the environment in which they inhabit. The Little Woods North Dakota town is as much of a character as Ollie or Deb are and DaCosta understands this is needed to make her directorial debut stand out. We can feel the history that each of the characters shares with one another through some very short but deliberate scenes. The writing is clear and expositional in an organic sense, helping to immerse us in the very relatable story DaCosta is putting out there, whether we’ve been impacted by the opioid crisis or not. We know what it is like to throw yourself down on the line for your family. We know what it is like to feel though as if the systems that are put in place by society to keep everything in order may actually be put in place to push us out. By exploring real-life struggles, DaCosta is able to capture our hearts and our minds and take us into her story with a sure hand.

The performances by Tessa Thompson and Lily James are very strong, as are the brief but effective supporting performances from their male co-stars. The real star though is Nia DaCosta. The performances she gets out of the cast are perfectly balanced and she also shows that she’s more than capable of wrangling a great deal of tension and suspense out of their scenes as well. The stakes always feel incredibly high throughout “Little Woods” even though there are no world-threatening stakes with superheroes swopping down in capes ready to save the planet from extinction. DaCosta’s story is much more grounded than that which in turn, is able to garner a different kind of emotional investment from the audience.

Although it can be quite small and maybe too quiet at times, “Little Woods” is a startling debut from Nia DaCosta. She has already secured the gig of directing the remake of “Candyman” and with the level of skill we see her employ here in terms of tone, performance, and pacing, I think she has an incredibly bright future ahead of her.