“THE CURSE OF LA LLORONA” 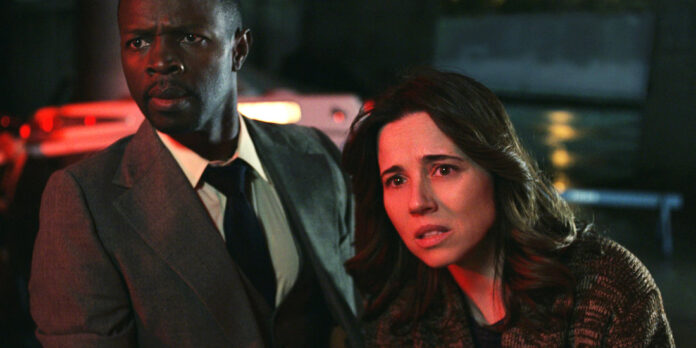 THE STORY – In 1970s Los Angeles, the legendary ghost La Llorona is stalking the night — and the children. Ignoring the eerie warning of a troubled mother, a social worker and her own kids are drawn into a frightening supernatural realm. Their only hope of surviving La Llorona’s deadly wrath is a disillusioned priest who practices mysticism to keep evil at bay.
​
THE CAST – Linda Cardellini, Raymond Cruz & Patricia Velásquez

Modern mainstream horror films have received a bad reputation in recent years for being unnecessary cash-grabs, riddled with uninspired genre clichés and jump scares. The worst ones all blur together with their lack of originality and paint-by-numbers plots. “The Curse of La Llorona” is unfortunately, another example of this model, despite deriving from a rich source of history and folklore.

The film opens in 1673 Mexico, which of course has a yellow hazy filter over it because how else would we know we’re in the past? We see the origin story of La Llorona unfold: a woman drowns her children after her husband sleeps with another woman. When she realizes what she has done, she weeps and then drowns herself in the same river. We then cut to our main story in 1973 Los Angeles (sans hazy filter).

Linda Cardellini plays Anna, a recently widowed social worker with two children. While checking in on the Alvarez family, Anna is warned by the family’s young sons that they are not safe and that “she” (La Llorona) is going to take them and hurt them. Ignoring this, they are put in child services custody and subsequently go missing, later being found dead in a nearby river. The ghost of La Llorona then sets her sights on Anna’s family, terrorizing them until she can capture the children.

Linda Cardellini’s performance is actually quite good. Even with the dialogue she’s given, she still showcases an impressive range of emotions and allows you to sympathize with her easily. The child actors are fine with good moments throughout, nothing terribly bad or distracting about their performances. I actually found the child services and social worker plotline to be a clever addition to the overall story. It grounded the film in a better sense of reality and was incorporated in a way that benefited the narrative.

The ways that La Llorona shows up start off clever and subtle. Whether it’s a car window slowly rolling down by itself or her reflection showing up slowly in the corner of a mirror, they actually evoke some unsettling feelings. However, it immediately becomes predictable when she fully comes in with the obvious jolt of the score and the poor CGI quality about her that never looks real. This happens so many times in the film that they became increasingly infuriating, as they are really the only type of jump scares found in the film. It also seems like any exterior wide shots of Los Angeles are just bad CGI, looking to be out of a video game rather than be based at all in reality.

The overall film becomes incredibly predictable and dumb at times, with the third act being the most groan-inducing due to certain character choices and bizarre editing. They incorporate horror tropes that become so obvious that they’re distracting, like the inclusion of a priest character solely for exposition or the fact that the father has recently died. The characters in the movie also choose to just not communicate about anything that they’re seeing and it becomes incredibly frustrating, clearly just an excuse for there to be more conflict. The random tie-in to the “Conjuring” Universe is so dumb and unnecessary that it feels like it’s only there as some sort of blatantly obvious Easter egg.

The biggest problem with the film is the fact that this is actually based on Mexican folklore that they do nothing interesting or culturally significant with. It feels odd and somewhat distasteful that they choose to have this told from the perspective of an American white woman and her family, and they don’t even fully get the cultural mythos and history of La Llorona correct. It feels like a wasted opportunity to do something interesting and unique with this story, but instead, they make just another standard jump-scare-filled horror movie that will make the studio a lot of money. This is director Michael Chaves’ feature film debut, but I blame the studio and writers a bit more than simply his direction.

Overall, the film is pretty bad at times but it is not the worst film you’ll see this year, or even the worst horror film probably. The film tries to be competent at times and features decent performances and sequences throughout, but it clearly forgoes originality in favor of following the standard formula of modern studio horror films because they “work.” It feels like a movie that will be forgotten in a few months time, as it is not anything really memorable in a good or bad way.