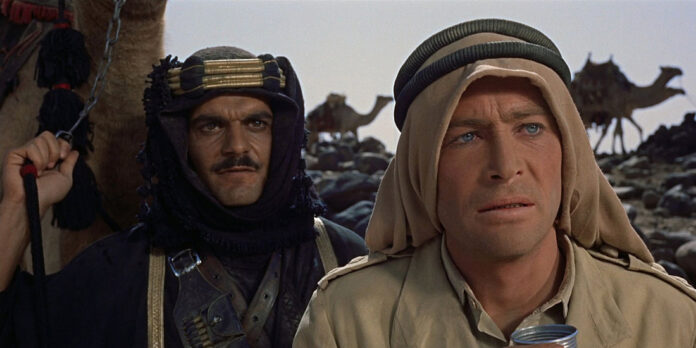 ​THE STORY – Due to his knowledge of the native Bedouin tribes, British Lieutenant T.E. Lawrence (Peter O’Toole) is sent to Arabia to find Prince Faisal (Alec Guinness) and serve as a liaison between the Arabs and the British in their fight against the Turks. With the aid of native Sherif Ali (Omar Sharif), Lawrence rebels against the orders of his superior officer and strikes out on a daring camel journey across the harsh desert to attack a well-guarded Turkish port.
​
THE CAST – Alec Guinness, Anthony Quinn, Jack Hawkins, José Ferrer, Anthony Quayle, Claude Rains, Arthur Kennedy, Omar Sharif & Peter O’Toole

​There is most definitely a bygone era of filmmaking that has eluded most of the current slate of releases today. The towering epic, vast in scope, execution and even running time, is something of a testament to the powerful nature behind films that no longer has the staying power it once maintained. One could argue there are a few filmmakers attempting to keep these ideas alive today, but for the most part, it seems the modern era has little to no time for the towering epics of the past. Fortunately, the legacies of these films are preserved for posterity, and revisiting such classics is a marvelous experience. Lawrence of Arabia is most certainly a product of that era, and it’s a commanding and breathtaking achievement to behold.

The film tells the vast and epic tale of T.E. Lawrence (Peter O’Toole), who begins his story as a low-level lieutenant in the British army during the first World War. Lawrence is sent to observe the situation in Arabia, where local tribes are revolting against the Turks. It is here that he meets many men that will alter his life in dramatic ways, including a fellow commander of the conflict named Sherif Ali (Omar Sharif), the prince who leads the resistance fighters named Fiesel (Alec Guinness), as well as another leader of a group of rebels named Auda Abu Tay (Anthony Quinn). The experiences in Arabia guide Lawrence to a great destiny that fundamentally changes him and his ultimate standing in the world around him.

When watching this film, one cannot escape how enormously encompassing the filmmaking is that’s on display. The film is impeccably designed from every element on the screen, and words can often fail to accurately describe the elegance that is crafted. David Lean captures all the beauty and ugliness of this world, aided immensely by the extraordinary cinematography by Freddie Young. Every frame of the film is dazzlingly rendered, not only in its aesthetic quality but also how such shots describe so much of the story and Lawrence’s journey. The editing, by the recently departed Anne V. Coates, is extraordinary not only for its bold transitions but also for keeping the pace for a film well over three hours at a breeze. One also cannot overlook Maurice Jarre’s monumental score, arguably one of the greatest in cinema history. All of these elements feed into Lean’s commanding vision of the film, and it is executed to a high level of proficiency and excellence.

It is also quite impressive to note that this film was the first major leading role for Peter O’Toole at the time. It would be a daunting task for any actor to carry a film with such a large scope to it, particularly one with little to no previous experience in such terrains. However, there is not an ounce of falsity in O’Toole’s performance. He brilliantly captures the arrogance, fears, insecurities, pride, and warmth of Lawrence in every scene, often needing to showcase all of these in subtle degrees throughout the film. There is such a commanding screen presence whenever O’Toole fills it, cementing it as one of the finest performances in his long and respectable career.

However, O’Toole is not the only noteworthy performance here. His co-star Sharif, another unknown star at the time, arguably gives an even more impressive performance than his leading counterpart. From the very moment that Sharif’s Ali enters, in the famous long lens shot, the film comes alive with his presence and is felt in every scene following. The comradery he feels with Lawrence, which turns from antagonistic to respectful, is fascinating to watch, and the charm he produces is undeniable. Sharif gives the film an extra bit of sparkle whenever he’s featured, and it’s always a joy to watch. Other noted players like Guinness and Quinn also play their roles well, though admittedly seeing actors in obviously darkened makeup to achieve the effect of brownface is noticeably distracting and does take away from appreciating the fine performances these actors give.

On that note, for being a well-respected piece of cinema history, the film isn’t without some flaws. The opening and close to the film are where the pacing issues are mostly felt, with the film struggling to find the momentum to get going and then losing steam before it crosses the finish line. The structure of the film rather necessities these feelings, particularly on the latter point, but when it managed to accomplish an excellent sense of pacing beforehand, it does prove bothersome toward the end of the film. Additionally, there are a few characters that feel a bit superfluous and some elements of this story could have been streamlined further. There is also a danger of this story utilizing the “white savior” trope, and while I’d argue the film mostly justifies why these rebels would slowly come around to embrace this foreigner, there are a few traps the film falls into in regards to this device while also navigating around it to the best of its ability.

When taking the entirety of the film all in, it’s no wonder why “Lawrence Of Arabia” is considered one of the greatest accomplishments in the history of cinema. It is undeniable how beautiful the film is in its style, with practical filmmaking techniques used to great effect that stand the test of time to this day. The performances are amazing all around, all the way from the fresh-faced newcomers to the established veterans. No film is completely flawless, and while the pacing sometimes drags in some spots, it doesn’t take away from the overall greatness of the film. Indeed, they don’t make them like this anymore, and we should be grateful that such a masterpiece is on display to revisit time and time again.