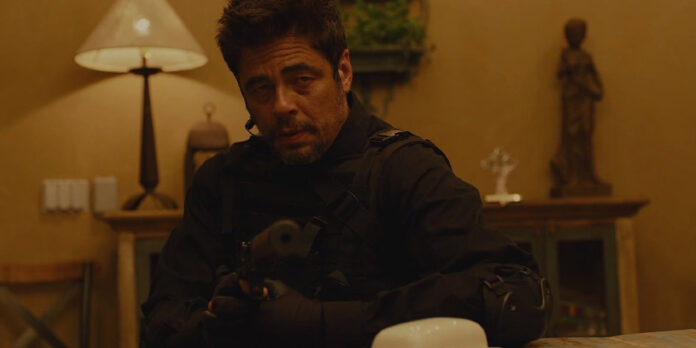 The opening moments of “Sicario” play out with stark brutality. An FBI team led by agent Kate Macer (Emily Blunt) raids a nondescript house on the Arizona border. The team is anticipating drugs and a few stray cartel soldiers. What they find instead are dozens of corpses, bloated beyond recognition and sealed into the walls. It’s a grotesque sight, enough to send Macer into a vomiting fit. Her inability to stomach the crime scene is secondary, however, to the sudden realization that she may be in over her head.

Before she’s able to get her bearings, Macer is pushed into an interagency task force led by “advisor” Matt Graver (Josh Brolin). Marginally skeptical, it doesn’t take long for Macer to realize that Graver and his silent partner Alejandro (Benicio del Toro) are operating well beyond the constraints of the law, and are simply bringing her along as a federal cover. In a more traditional film, Macer would be faced with one of two options: either she tries to put a stop to the operation, or she gives in to her corrupt superiors. In “Sicario,” neither of these things happen. Instead, screenwriter Taylor Sheridan and director Denis Villeneuve carve out a third, more troubling option: Macer’s efforts make no difference at all.

Macer is incredibly capable and strong in a situation where her capabilities and strength are useless. No matter how many times she elbows her way to the front, she’s the last to be made aware of the plan. In a land of wolves, she’s become the prey. Sheridan’s script might be too much of a downer for some, but it is a brilliant study on corruption and the near-impossibility of being able to overcome it. “Nothing will make sense to your American ears, and you will doubt everything that we do”, Alejandro remarks. “But in the end, you will understand.” His words double as a threat for Macer and a sobering promise for the audience.

The performances given by the main trio of actors rank among their best. Blunt is haunting as the slowly unraveling FBI agent. A lesser actress would have resigned themselves to looking stoic, but the neurotic Blunt, with eyes that constantly dance between bravery and insecurity, keeps things engaging. It’ll be interesting to see how “Sicario: Day Of The Soldado” fares without her nimble presence. Brolin, who’s given the least to do and the most to convey in terms of exposition, also manages to impress as the smug Graver. He’s the “good cop” to Alejandro’s “bad cop” by default, but the scenes where he drops his playful tone prove that he’s every bit as intimidating as his Latino comrade.

Alejandro is a perfect role for del Toro, who always gets scarier when his gestures outnumber his lines. Nobody knows where he comes from, who he works for, or what he considers to be the end game. Every aspect of his life is shrouded in secrecy, and it stays that way for the duration of the film. That del Toro manages to keep such a mythic character grounded is a testament to the subtlety of his choices. He dramatically underreacts. He puts a gun to Macer’s chin at one point, but instead of badger her, he wipes away her tears, as though they were old friends sharing an embrace. It’s absolutely chilling work.

That’s not to say the film is without flaws. The subplot involving a corrupt Mexican policeman (Maximiliano Hernández) and his son might’ve been interesting on paper to illustrate the moral greyness that Sheridan wants to depict on all sides of the war on drugs but it feels estranged from the core narrative. For as great as Emily Blunt is, the character of Kate Macer will frustrate many and has been a contentious point of criticism pointing towards Sheridan’s weakness when it comes to writing women (See also the undeveloped character Elizabeth Olsen plays in “Wind River”). The same goes for Macer’s underwritten partner Reggie (Daniel Kaluuya), who only shows up when she needs a moral confidant. These are not fatal flaws so much as contrivances that prevent “Sicario” from reaching the heights of Sheridan’s Oscar-nominated “Hell Or High Water” script.

The audiences’ enjoyment of the film may also depend on which aspects of Villeneuve’s direction they most value. “Sicario” lacks the surreal detours of films like “Arrival” or “Blade Runner 2049,” so anyone expecting android coitus or alien telepathy will leave disappointed. For someone who finds these detours distracting, however, and tends to appreciate Villeneuve more for his technical mastery,  “Sicario” offers some of his finest work to date. He and cinematographer Roger Deakins create a world of hostile beauty, whether it be the muted aerial shots of Juarez or the silhouettes of agents burrowing underground, as though they’re being swallowed up by the land.

Villeneuve’s staging of action is similarly inventive. The frantic editing and pulsing score (Provided by the late-great Johann Johannsson) of the convoy scene suggest that we’re going see a car chase play out. That the team gets stuck in a traffic jam is not only unexpected but astronomically worse given their cargo. In a similar vein, the film’s climactic shooting opts to show us the stunned expression of a cartel boss, rather than the bullet-ridden bodies of those around him. More than most directors, Villeneuve understands that the implication can often be more powerful than the depiction.

Fans often like to compare “Sicario” to another cartel epic, 2000’s “Traffic,” but the comparison is superficial at best. Aside from the border setting and the casting of del Toro as an enigmatic figure, the stances of both films are diametrically opposed. “Traffic” gravitates towards the slivers of light in the darkness; the momentary relief of a father reconciling with his addict daughter, or a dirty cop rediscovering his integrity. “Sicario,” on the other hand, embraces the darkness with open arms. There are no quick fixes or redemptions here. There are only harsh realities, and a pessimism that more accurately speaks to the war on drugs and what must be done to win it.

The film’s message is troubling because it is often true: the longer we cling to our morals, the more susceptible we are to becoming sheep in a land of wolves.