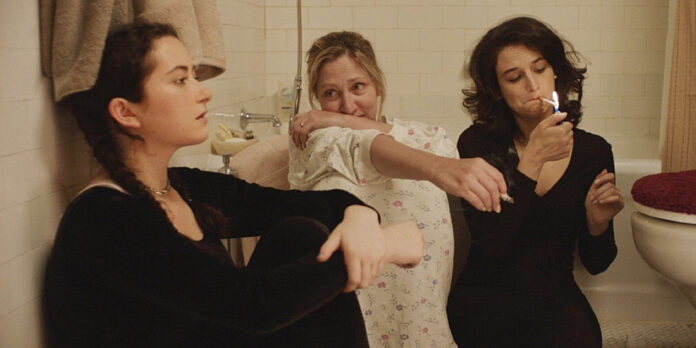 THE STORYTwo sisters come of age in ’90s New York when they discover their dad’s affair. Eventually, they learn he’s not the only cheater in the family.

​In the sweltering summertime heat, sometimes all we need are the time-worn pleasures: Soft-serve ice cream, a cold glass of water, and a movie that plays all of our favorite sentimental notes. “Landline,” Gillian Robespierre’s mid-nineties-set comedy about a family in varying stages of crisis and rebellion, is one of those movies. Familiar and soothing, “Landline” dives headfirst into nostalgia, and it uses its conventions to its advantage.

The movie follows 4 family members in New York City, circa 1995: Dana (Jenny Slate), a playful twenty-something who longs for more excitement in her relationship with her jovial fiancé (Jay Duplass), a longing that leads her to have an affair with an old college flame (Finn Wittrock); her sister, Ali (Abby Quinn), a rebellious teen who behaves as rebellious teens in movies tend to behave; their mother, Pat (Edie Falco), who worries about the direction of her daughters and the perceived listlessness of her husband, Alan (John Turturro), an aspiring playwright whose affair places him in a precarious position within the family. The plot revolves around the fate of these familial and romantic relationships. Will infidelity and dishonesty rupture the family, or will lessons be learned and reconciliations be made by the time the final credits roll?

“Landline” does not concern itself with tackling these questions in an original fashion. The plot developments here are as visible from a distance as the purple tracksuit that sits in Pat’s wardrobe. Director Gillian Robespierre, working from a script that she co-wrote with Elisabeth Holm, understands that her movie is comfort food, and she wisely avoids drumming up unnecessary tension. Robespierre and Holm include enough charm and specificity of setting – the clothes and music capture the mid-Nineties vibe – that most of the predictable moments are met with a knowing smile.

The classic beats of “Landline” are enlivened by a quartet of sublime performances. Jenny Slate, who won much acclaim for her previous collaboration with Robespierre and Holm, “Obvious Child,” is a buoyant, bold, and wonderful actress, and her performance here serves as further proof that she deserves more leading role opportunities. As Dana, Slate snorts while laughing without a trace of self-consciousness, dances gleefully inside a record store, and cries tears of genuine remorse. It is a full portrayal of life’s emotional pendulum and some of the most authentic work we have seen at the movies this year. Abby Quinn is a worthy on-screen partner, and she puts a magnetic spin on the standard teen acting out role. Slate and Quinn create a moving sisterhood, and their scenes together are the film’s greatest asset. The always reliable duo of Edie Falco and John Turturro also shine. Their climactic scene toward the end of the movie, in which Pat and Alan reckon with the reality of their fractured marriage, is a master class in acting.

Countless movies have played around with family, infidelity, and the quest for happiness, but few have done so with as much warmth as “Landline.” Unfairly given a negative response coming out of this year’s Sundance Film Festival, “Landline” deserves a second look. Gillian Robespierre’s latest is unlikely to have much of a lasting impact, but it is a modest and entertaining respite from the summer noise.

THE GOOD – Excellent performances from the cast and a simple story that is well told.
​
THE BAD – Not particularly memorable in this overly saturated movie market
​
THE OSCARS – None