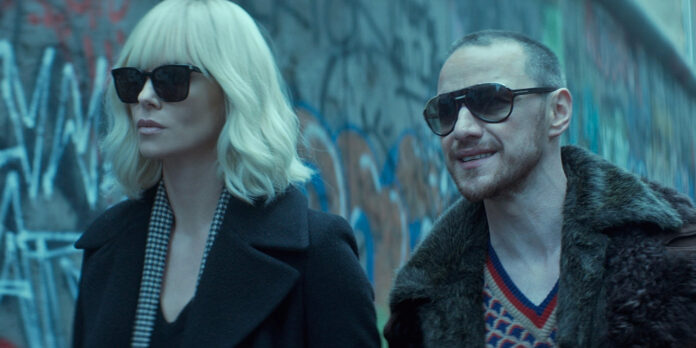 THE STORY – Agent Lorraine Broughton (Charlize Theron) is equal parts spycraft, sensuality and savagery, willing to deploy any of her skills to stay alive on an impossible mission. Sent alone into Berlin to retrieve a priceless dossier from within the destabilized city, she partners with embedded station chief David Percival (James McAvoy) to navigate her way through a deadly game of spies.

​You can rest easy “John Wick: Chapter 2.” You’re still the best adult action film of 2017. I ask, when was the last time you saw a film so in love with itself that it actually managed to lessen its own worth? I vividly remember watching “Suicide Squad” last year and feeling this way. I got the same feeling while watching “Atomic Blonde.” While not as horrendously bad as DC’s comic-book adaptation, “Atomic Blonde” shares a few of the same issues that plagued David Ayer’s film. While there are some standout moments to be sure and Charlize Theron truly gives it her all (Seriously, there were numerous moments where I feared for her safety), “Atomic Blonde” is a misfire which borders along the lines of greatness.

Taking place in Berlin at the end of the Cold War in 1989, Agent Lorraine Broughton (Charlize Theron) is a deadly spy who is sent alone to retrieve a special list of agents that could have disastrous consequences for the CIA and MI6 should it fall into the wrong hands. There, she meets her contact David Percival (James McAvoy) who tries to aid her on this mission. The film is told in flashback from Lorraine’s point of view from a debriefing room with her superior Eric Gray (Toby Jones) and a CIA agent working for MI6 named Emmett Kurzfeld (John Goodman).

Director David Leitch, one of the co-directors of the first “John Wick” and the sole director of the upcoming “Deadpool 2,” does his best to make “Atomic Blonde” stand out. The film is infused with a take-no-nonsense punk rock style that features bright neon lights, lots of graffiti and popular pop hits of the 80’s set against the backdrop of a murky and desaturated Germany. With a spy thriller story aimed to please adults mixed with an attitude hoping to appeal towards young teenage boys, “Atomic Blonde” is way too over the top to be taken seriously. It’s use of “style over substance” would be forgiven if the characters and the story were anything special, helping to raise it above the mediocrity which it settles for. Unfortunately, David Leitch is more concerned about which pop radio-hit will be used to make a scene any less boring than it already is than he is with helping us to understand the character of Lorraine or the convoluted web of entanglement she finds herself caught up in.

Where “Atomic Blonde” really does succeed is in its action set-pieces, mainly a now infamous “stairway sequence” that is breathtaking in its execution and sheer visceral impact. It’s brutal, yet smooth and well paced throughout. None of these scenes, however, would work without the full commitment of the film’s star, Charlize Theron. She commands the screen in every scene that she is in, whether it be with a glance or a punch in the face. James McCoy has an important role to play in this film but his character is not given enough development and gets crushed under the screenplay’s confusing plot which features plenty of spying and double crossing. Had the screenplay been less concerned with the intricacies of who has the mysterious “list” that all the characters seek and focused more on the characters, their place in the real world and the world they chose for themselves, this could have been more interesting.

“Atomic Blonde” could have been one of the best action films of the year. One set piece in particular (The stairway sequence) is absolutely breathtaking and will go down as one of the best choreographed and performed action sequences in cinema. However, that, along with Charlize Theron’s physical and commanding performance is not enough to pick “Atomic Blonde” up. Too many distracting musical queues, an odd sense of pacing and an overly complicated story with a lack of character development all hurt what is an admirable but misguided film. It may not be an atomic bomb, but it’s certainly an atomic whimper.