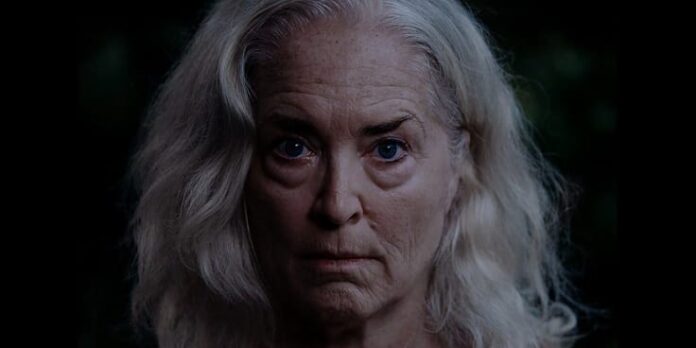 “Krisha” is a hauntingly intimate and bold look at the effects of addiction and the pain it causes not just on the individual herself, but those who love her the most. It’s a startling debut from writer/director and actor Trey Edward Shults who tells what is seemingly a simple story with confidence and ambition. The film is backed by a fantastic ensemble which consists of Shult’s own family and friends and led by a harrowing lead performance from Krisha Fairchild as the black sheep of the family that impacts everyone she comes into contact with.

It’s Thanksgiving and Krisha (Krisha Fairchild) has returned to her sister (Robyn Fairchild) Robyn’s home to enjoy the holiday with her extended family. Krisha is recently sober after spending years and years of her life causing chaos and turmoil for her family due to her addictions. She’s doing the best that she can to not only convince others around her that she is a better person now, but also herself for she still requires pills to keep her going throughout the day. Moments with her estranged son Trey (Trey Edward Shults), her own delusional mother Billie (Billie Fairchild) and the constant swarm of people, dogs (12 to be exact) and other encounters start to push Krisha over the edge, leading to a climatic showdown between Krisha’s demons and her own family.

From the very beginning of “Krisha,” Trey Edward Shults displays that he is completely in command of this story and how it is told. Opening with one of many long unbroken shots, “Krisha” is as talented as a debut from any director I have seen this year. The camera constantly moves with purpose and as the film gets dark and deeper into the psyche of Krisha, so too does the overall look the film. From the uncomfortable yet moody soundscape to the changing aspects ratios to highlight Krisha’s mindset, to the sporadic nature of the film’s editing, Shults is firing own all cylinders as a director, not allowing the simplicity of the story to be written off by anyone. His work is fearless, challenging and draws you in with every moment of tension getting more intense as the film progresses.

What Krisha Fairchild accomplishes with the character of Krisha feels all too real and the results are heartbreaking. As she pleads with members of her family proclaiming that she is well and no longer a slave to addiction, you can sense a genuine longing for acceptance and willing to make up for lost time. Her scene with her son where she tries to reconcile with him after what has been years of torture and heartbreak is absolutely devastating in its intimacy. Keisha Fairchild is truly outstanding here, as too is Robyn Fairchild who plays her sister Robyn and her brother-in-law Doyle, who is played with searing contempt for Krisha by Bill Wise. Even Shults, himself, does a great job of conveying a tremendous amount of pain, all the while still trying to maintain strength and hope for his mother’s well-being.

“Krisha” is a crippling look at addiction and what that does to one’s own mind and the hearts of others. There is no real big takeaway from the film in terms of a message, except to say that addiction is a truly horrible thing and family is all we can rely on in the most troubling of times. “Krisha” explores what happens when we start to lose the one thing that keeps us going: family. For if an addict loses the support of their family and friends, then they might as well give up.