“HUNT FOR THE WILDERPEOPLE” 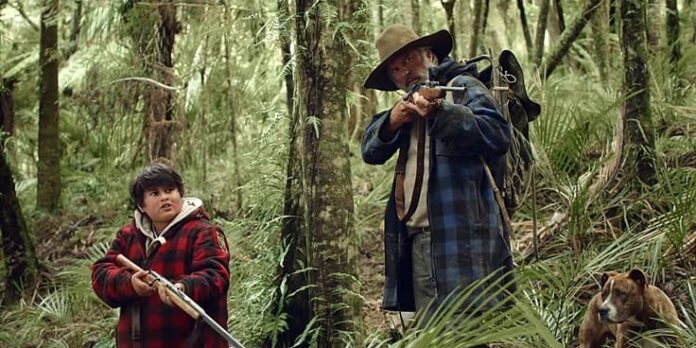 THE STORY – A boy (Julian Dennison) and his foster father (Sam Neill) become the subjects of a manhunt after they get stranded in the New Zealand wilderness.
​
THE CAST – Sam Neil & Julian Dennison

​I cannot say with absolute certainty, but I am pretty sure “Hunt For The Wilderpeople” might be the easiest film I have watched in 2016. As far as charm, pacing, and overall enjoyment, this film is nothing but a pure joy. It boasts wonderful characters caught up in a situation that spirals out of control for them, all the while never losing sight of the more personal and human elements of the story. If when you first hear about the premise for “Hunt For The Wilderpeople” and you’re not sold on it being a good viewing experience, think again. The laughs come organically and so too does the drama leading to this being one of the great surprises of the year.

Ricky Baker (Julian Dennison) is a juvenile delinquent who is in trouble for “disobedience, stealing, spitting, running away, throwing rocks, kicking stuff, loitering and graffiti” as Paula (Rachel House), a child welfare worker, tells Bella (Rima Te Wiata) and Hector (Sam Neil) before she grants Ricky into their custody. When an unexpected event shakes the foster family, Ricky decides to run away and go live in the wild. Realizing that Ricky cannot do this on his own, Hector goes out into the wild in pursuit of Ricky. When the two catch up with one another and word that Ricky has gone missing starts to spread, the two find themselves in the unexpected position to not only flee from the authorities but learn to trust one another on their adventure through the New Zealand countryside.

“Hunt For The Wilderpeople” is off-beat in terms of its story and characters. This all starts and begins with the chemistry between Julian Dennison and Sam Neil. The bond which these two characters share on screen not only helps to bring unexpected depth and pathos to the story of Uncle Hector (Or “Hec” for short) and Ricky Baker but also manages to make us laugh more times than once. The humor within “Hunt For The Wilderpeople” mostly centers around the comments, remarks, and antics (Sometimes pop culture related) of Ricky Baker and his attitude towards him and Hector’s situation. Where other children would behave differently, Ricky Baker embraces the adventure that the two unlikely companions find themselves on, even if it means facing danger and going out in a blaze of glory. He relishes in the moments when “shit gets real” and that wide-eyed sense of wonderment is what helps to make the film such a delightful experience. Credit must also be given to Sam Neil, who perfectly finds the balance in being a tired craggy old man who wants nothing to do with Ricky Baker at first, to becoming a warm-hearted protector of the child. Unexpected warmth is found within “Hunt For The Wilderpeople” in the unlikeliest of places (In this case, the New Zealand countryside) and that is what makes the film resonate.

Writer and director Taika Waititi (“What We Do In The Shadows”) has an eye not only for some gorgeous environmental shots, whether it be on the ground in the forest, or in the air by helicopter, but also for pacing his film with an energy that helps it to zip right along. Some inspiring music cues and brisk editing, along with the as before mentioned charming performances, help to make “Hunt For The Wilderpeople” his most accessible film yet. It may start to lose steam by the end and results in a conclusion that may or may not meet expectations (And will certainly have a few people reminiscing about “Thelma & Louise”) but this is still a purely entertaining ride. It may not exactly sound like it at first when you first hear about, but just a few moments into Waititi’s film and you’ll realize right away that you’re completely hooked. It’s an adventure film that embraces the adventure part with a childlike sensibility and I love it all the more for it.