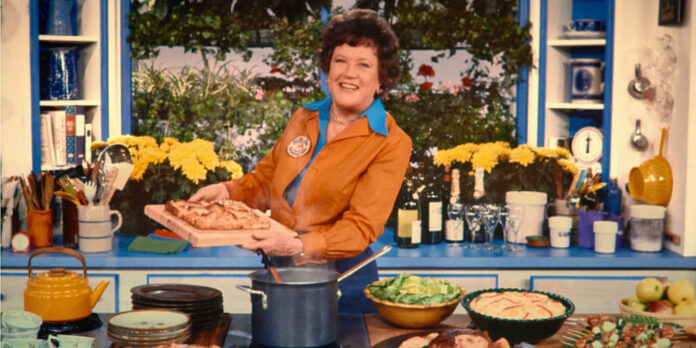 THE STORY – Tells the story of the legendary cookbook author and television superstar who changed the way Americans think about food, television, and even about women. Using never-before-seen archival footage, personal photos, first-person narratives, and cutting-edge, mouth-watering food cinematography, the film traces Julia Child’s surprising path, from her struggles to create and publish the revolutionary Mastering the Art of French Cooking (1961) which has sold more than 2.5 million copies to date, to her empowering story of a woman who found fame in her 50s, and her calling as an unlikely television sensation.

​It’s no secret that Julia Child completely revolutionized the cooking world when she burst onto the scene in the 60s – especially when it came to getting women respect in this male-dominated industry. However, so few know Child’s full story, despite the popularity of her iconic cookbook “Mastering the Art of French Cooking” and the success of her cooking show, “The French Chef.” Enter documentary filmmakers Julie Cohen and Betsy West. They, after reverentially retelling the rise of Ruth Bader Ginsburg in their Oscar-nominated feature “RBG,” set their sights on Child as their next subject, chronicling her climb to fame and surveying the obstacles that stood in her way. While it packs less of a punch than that powerfully political piece and doesn’t always dig quite as deep in Child’s life as one may wish, “Julia” is nevertheless charming cinematic comfort food that is sure to still inspire many fans of the famed cooking idol.

“Julia” sets out to tell the story of Julia Child in its entirety, from her struggles in childhood with a strict conservative father (who doubted women’s worth in the career world) to her brief stint in the Office of Strategic Services during World War II to her contributions to the French women’s cooking club Le Cercle des Gourmettes, which preceded her soon-to-come worldwide popularity as a cook. Throughout it all, Child continually strained against sexist and ageist stereotypes, with many doubting that a 50-something woman had what it took to really “stick it out” as a celebrity chef. Naturally, we all know how the rest of that narrative goes, with Child becoming a worldwide phenomenon and continuing to motivate women to make their mark in this competitive industry. Even after her death in 2004, her legacy has lived on, and an innumerable amount of female chefs cite Child as their influence for pursuing this profession.

For the first half of “Julia,” most of the movie is identical to the synopsis above – a straightforward reiteration of her history, which is sadly nothing you couldn’t find on Child’s Wikipedia page (or in Nora Ephron’s Oscar-nominated biopic “Julie & Julia”). It’s interesting enough, but it lacks the insight that made West and Cohen’s RBG such a standout success in the crowded documentary genre. The directors do find an affecting approach to sharing Child’s story by using archival audio to allow Julia to narrate the documentary herself,  but this doesn’t change the fact that the movie is merely a rote retelling at the start. With that being said, the picture’s pacing is luckily still pretty brisk, and Rachel Portman (“Chocolat,” “The Vow”) keeps things light and lively with a spry, sweet score that aligns with Child’s cheery aura admirably.

Thankfully, “Julia” starts to also slowly pick up in the second half, as it investigates the impact of Julia Child via the perspectives of all the people she touched – contemporaries, companions, and crowds of adoring admirers. It’s here that we’re able to truly see what Julia became beyond the bullet points of her life, and it offers an effective explanation as to why she endures as an icon for working women today. Also endearing is the behind-the-scenes footage of her time on “The French Chef” integrated into the film, which shows Child at her most comfortable, clowning around with cast and crew and free of her public persona. It’s hard not to wish we received even more sequences like this and less telling us what we already knew about Child coming in. These moments make her feel more natural and demystify the “divine” figure she’s become, highlighting layers of her humanity previously unseen.

“Julia” is clearly made with considerable love for its subject, and it’s certainly structured soundly. Still, some viewers may be left wondering why the documentary wasn’t a bit more daring in its storytelling or its style, as it settles for “fine” when a mighty legend like Julia Child deserves so much more. Still, for what it is, the documentary will go down easy enough for previously self-designated Julia devotees, and with a story this sensational, it’s hard to go wrong. As the chef herself once said, “You don’t have to cook fancy or complicated masterpieces – just good food from fresh ingredients,” and “Julia” is at least most definitely some “good food.”