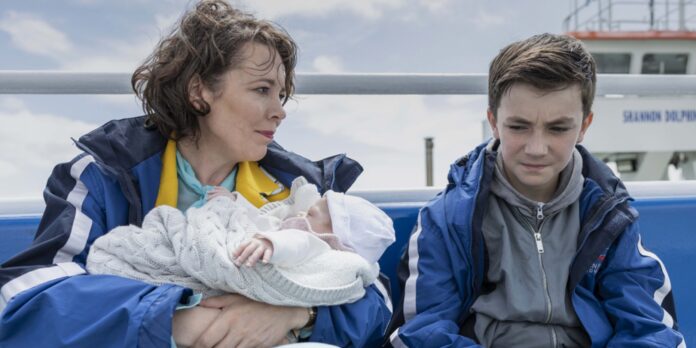 THE STORY – Follows Joy, a train-wreck on an adventure who is ready to give away her newborn baby. Joined by a cheeky street urchin, they are two diamonds in the rough on the run.

The road trip buddy comedy is a movie staple. Often, at least two people who are diametrical opposites end up in the same car – think “Planes, Trains, and Automobiles” – and must go through obstacles until they reach their destination. There are plenty of blunders and laughs along the way, as one would expect, but the heartwarming moments make these movies stand out. Characters realize there’s more than meets the eye with their companions and end up cementing themselves as iconic pairings.

Emer Reynolds’ “Joyride” has all the tropes you would expect, like a broken-down car and a police chase, but it doesn’t reach a destination that would cement itself as a great road trip film. Its biggest blunder is a simple, mediocre script that’s too unimaginative.

The film follows two vastly different people: brash 12-year-old Mully (Charlie Reid) and middle-aged lawyer Joy (Olivia Colman), who both try to escape some part of their lives. For Mully, he wants to get away from his father, James (Lochlann O’Mearáin). After Mully croons happy bar patrons with his rendition of Cab Calloway’s “Minnie the Moocher,” he spots his father stealing the cash that would go to a cancer charity fund in memory of Mully’s recently deceased mother. Stealing the money back and a taxi, the boy makes a run for it, only to find much more than he bargained for in the backseat.

There awaits a sleepy, drunk Joy and her newborn daughter. She eventually ropes the young boy into driving her to her friend’s house. There, she will leave her daughter behind and board a plane to the Spanish island of Lanzarote. The plan sounds simple enough, but because this is a road trip film, there will always be something that gets in their way, whether it be the car running out of fuel, James chasing after them, or the unlikely duo getting annoyed with one another. But at least they get to take in the beautiful, green, and vast Irish landscape, shot meticulously by cinematographer James Mather.

The hijinks are standard and not particularly exciting, especially if you’ve seen this type of film before. But one storyline that’s most disappointing is Joy’s journey with motherhood and postpartum. Not everyone wants to have a child. It’s a complicated internal issue for anyone to grapple with. However, Joy’s character and the story essentially reduce her to a stuffy, selfish woman who wants to rid herself of a burden. The script doesn’t seem interested in diving into her fears or overall thoughts on the subject. We don’t learn much about her other than a few moments when Joy recalls her childhood and how her own parents weren’t equipped to care for a child, essentially leading to her decision. As a result, it makes it hard for us to sympathize with her character or truly understand her reasoning.

Later, when Joy has second thoughts, it’s another instance of the script not handling the subject with care because it suggests that it’s easy to change course after being so vehemently against motherhood. It sends the message that maybe all women who struggle with a similar decision need to take a drive along the Irish countryside to clear their minds. It’s quite surprising to see Colman in this film, especially considering her Oscar-nominated performance in “The Lost Daughter,” which was a much stronger exploration of motherhood and the overwhelming feelings that come with it.

Colman still brings her usual entertaining self to the role, especially when she gets really heated and tells people to “f— off.” When “Joyride” shines the most, Joy and Mully share quiet, tender moments together, like when he coaches her through her first breastfeeding experience (Although it’s a little hard to believe a young boy would have so much insight on the topic.) Aside from our lead car buddies, the script doesn’t do much to expand on other characters or make their stories that interesting or enjoyable, like James and his attempts to catch the unlikely pair.

In the end, “Joyride” doesn’t provide much joy due to a shaky and uninspired script. Even though Colman is always a bright spot in movies, this is one ride she shouldn’t have gotten on.