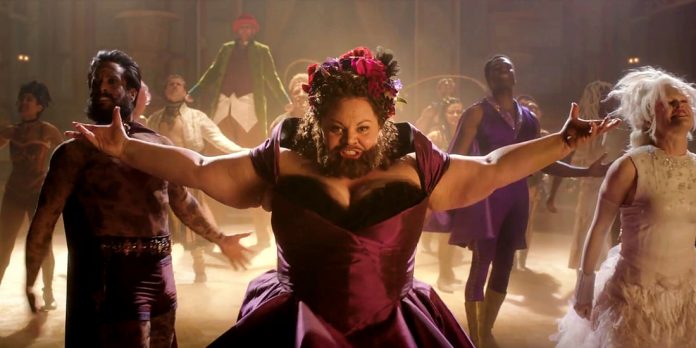 ​​I know, I know. I’m not excited about it either. We’ve spent all season long pretending like it wasn’t happening. We convinced ourselves that bad reviews knocked it out of the competition. We said that the Golden Globe win was a fluke. But it’s time we all accepted the hard truth: “This Is Me” is winning Best Original Song at the Oscars this year.

Reception for “The Greatest Showman” was decidedly mixed. Rotten Tomatoes shows the film at a 55%. Film Twitter has had a good time making fun of the film. Still, well over a month after the film came out, there’s no denying its popularity. As of this writing, it’s made over $314 million worldwide, with shocking staying power from week to week. It’s hugely successful despite the mixed critical reception. But if your experience is anything like mine, chances are you know people who are die-hard fans of the film. So many people in my circle have seen the film multiple times in theaters. Even friends of mine who never go to the theater ventured out to see what all the fuss was about – and they loved the movie!

Now, before you start, no, my friends are certainly not Academy Award voters. I understand full well that there’s a difference between general audiences opinions and those of Academy voters. Just because a film has great box office success that doesn’t mean it’s winning Oscars. I get it. But this movie is wildly popular, especially among older audiences and families. There’s no question as to what the most widely known nominated song is this year. And it’s not even close.

The soundtrack to “The Greatest Showman” has topped charts in multiple countries. It spent two weeks at number one on the Billboard Top 200 albums and has remained at number two on the chart since Jan. 20th. It’s the first theatrical soundtrack to hit number one on the list since 2015 – meaning not even “La La Land” did it. It’s remained the number one album on iTunes for weeks, with no sign of slowing down. Even most reviews acknowledged how fun and catchy the songs were, even if they didn’t love the film itself. This soundtrack is a juggernaut. And it’s crown jewel? The Oscar-nominated hit “This Is Me”.

The Pasek & Paul (Whose credits include the Oscar-winning “La La Land” & the Tony-winning “Dear Evan Hansen”) song was featured in the very first trailer, released all the way back in June 2017. Since then, it’s caught on like wildfire. It’s spent weeks on the Billboard Hot 100. During Super Bowl LII, an inspirational promo for the Winter Olympics featured the song. These ads continued through the Olympics themselves, becoming an anthem for the games. This is a major promotion for the song. Like it or not, this song is everywhere, getting into the head of everyone who hears it.

Again, I know that general audiences don’t vote for the Oscars, but exposure like this is vital. What other song nominated this year is known or loved at this level? Admittedly, this category is tough to predict this year, largely because each of the songs seems equally lacking much attention. “Stand Up For Something,” Common and Diane Warren’s song from “Marshall” certainly isn’t well known. Being Warren’s ninth nomination helps, but it won’t win. Mary J. Blige received one of her two nominations this year for “Mighty River” from “Mudbound.” This is a big song for the film, and many could look to reward it here since “Mudbound” likely won’t win elsewhere. Sufjan Stevens’ “Mystery Of Love” from “Call Me By Your Name” is widely considered the “best” song nominated this year for “Call Me By Your Name.” Still, it’s been overshadowed by the two frontrunners: “This Is Me,” and “Remember Me” from “Coco.”

Many believe “Remember Me” is winning the Oscar. It leads the predictions on Gold Derby. It’s been in the lead all season long, but it’s a little hard to quantify why. “Coco” received rave reviews of course, and will quite easily win Best Animated Feature. Still, the song itself is ironically not very memorable due to the multiple versions used throughout the film. It’s also not a radio-friendly song like other hit Disney songs were such as “Let It Go” and “How Far I’ll Go.” It certainly didn’t catch on with the public like “This Is Me.” It seems that it’s remained out front only because the film was more critically acclaimed than “The Greatest Showman.”

There aren’t a lot of precursors to look to for clarity. “This Is Me” won the Golden Globe for Best Song, while “Remember Me” won the Critics’ Choice for Best Song. Since 2000, both awards have matched with the Oscars 7 out of 17 times. So, it’s still technically anyone’s game.

But let’s get real. “This Is Me” is the most popular nominated song since “Let It Go.” Will voters go for a song they barely remember or a song that they keep hearing time and time again? While “Remember Me” is featured in a better film, how can it keep out in front while “This Is Me” gets tons of airplay during the Olympics?

Maybe you hate “The Greatest Showman.” It’s understandable considering the film’s failure to focus on the characters who feature so prominently in the song “This Is Me” instead choosing to focus the story on the perfectly fine, able and privileged characters that Hugh Jackman and Zac Efron portray. And maybe many Oscar voters hate it too. But they liked the song enough to nominate it. I’m betting that the huge popularity of the film, not to mention the success of the song itself, will propel it to a win. Like it or not, it’s time to accept that “This Is Me” is winning Best Original Song.

So do you agree or disagree with me? Do you think the popularity of “This Is Me” will catapult it to an Oscar win for Best Original Song or is this “Happy” all over again? Let us know your thoughts in the comments section below.