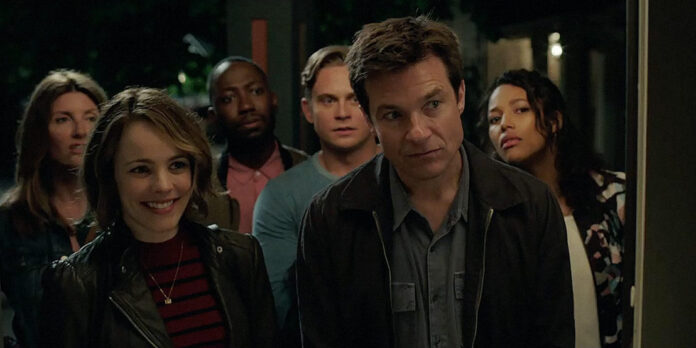 THE STORY – Max and Annie’s weekly game night gets kicked up a notch when Max’s brother Brooks arranges a murder mystery party — complete with fake thugs and federal agents. So when Brooks gets kidnapped, it’s all supposed to be part of the game. As the competitors set out to solve the case, they start to learn that neither the game nor Brooks are what they seem to be. The friends soon find themselves in over their heads as each twist leads to another unexpected turn over the course of one chaotic night.

​​The premise may be completely impossible. The momentum may slow down a little by the end. And yes, it is 100% completely silly from the first frame all the way until the last. So why does “Game Night” work as well as it does? It has an incredibly gifted comedic cast with various personalities that all stand out in their own unique way and unlike most comedies, nearly every joke hits the right mark for maximum laughter. I have not laughed this hard at a movie in a long time and credit must also be paid to the writer on this film Mark Perez, who gives the actors ridiculous situations to get caught up in and the right lines to help sell those moments. This is one night at the movies you will surely want to miss actual game night for.

Max and Annie (Jason Bateman and Rachel McAdams) are a loving couple who both are very competitive by nature. They typically hold a weekly game night at their house with their friends, husband, and wife Kevin and Michelle (Lamorne Morris & Kylie Bunbury) and Ryan (Billy Magnussen), a goofy-dumb playboy who brings a new girlfriend every week. This week, they are being joined by Max’s more successful and better-looking brother Brooks (Kyle Chandler), who hosts them at his rented out house while he’s visiting the area on business. He tells them that on this particular game night, someone from the group will be taken and the rest of them will not know what is real and what is not due to professional actors being involved. There will be clues left behind as to how to locate the missing person and the first team to find them wins. Sounds like a fun murder-mystery party right? That is until actual kidnappers arrive at Brooks’ house and kidnap him for real. The problem? The others all still believe it is an elaborate farce, all part of the game.

Jason Bateman has proven himself to be more than capable of leading a comedy film as the everyman caught up in a ridiculous situation. Rachel McAdams has also done comedic films before and it’s great to see her flex those comedic muscles again when we have become so accustomed to seeing her in dramatic films. The rest of the supporting cast help to round things out with equally hysterical line readings, side quips, comedic timing and physical comedy. However, the real standout is Jesse Plemons as a recently divorced police officer who the others avoid inviting to their traditional game night because quite frankly, he’s a little weird, to say the least. Plemons is used perfectly here as his unsettling, calm and emotionless face pulls out howler and laughter from the audience. He’s a character that is suitably creepy but also holds layers of depth underneath his eerie exterior. While not all of the characters are as fully fleshed out as the main ones, they all at least get their moments to add to the story and to the comedy instead of being forgotten amongst all of the mayhem.

“Game Night” does start to suffer as it enters its third act. The film starts to get more serious as the illusion of the game fades and the dangers of reality sink in. A few twists interjected in the third act, attempt to trick the audience into thinking that the game is back on but the trick starts to reveal itself the more it is used on us. Despite this, the film is constantly entertaining throughout due to its cast and the quick-witted writing that snappily keeps the story moving and evolving at all times. In the end, “Game Night” is harmless fun with more than a few memorable scenes, moments (A sort-of cameo from a famous celebrity and the removal of a bullet stuck in Jason Bateman’s arm all stand out), interesting scene transitions using quick editing and clever camera work plus enough jokes referencing pop culture from Liam Neeson in the “Taken” series to “The Green Mile” that you probably won’t notice its many other flaws with its narrative.