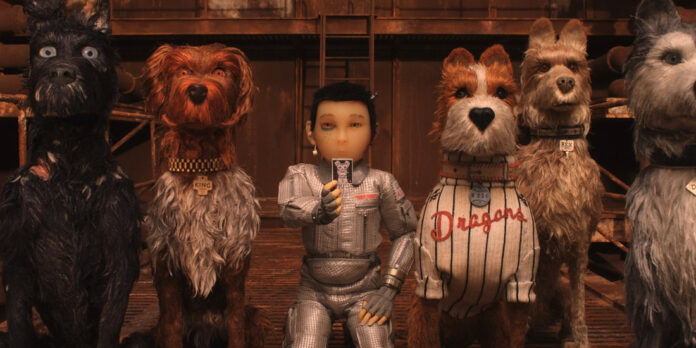 THE STORY – When, by executive decree, all the canine pets of Megasaki City are exiled to a vast garbage-dump called Trash Island, 12-year-old Atari sets off alone in a miniature Junior-Turbo Prop and flies across the river in search of his bodyguard-dog, Spots. There, with the assistance of a pack of newly-found mongrel friends, he begins an epic journey that will decide the fate and future of the entire Prefecture.

​​​For me, Wes Anderson hit a new creative peak with his first foray into stop-motion animation with “Fantastic Mr. Fox” back in 2009. It was easily up to that point my favorite Wes Anderson (Until “The Grand Budapest Hotel” a few years after that) film precisely because of how well his signature directorial style lent itself to the animated format. It was fun, hysterical, perfectly cast and beautiful to look at. Many of those qualities carry over to his latest foray into stop-animation with “Isle Of Dogs.” However, where with “Fantastic Mr. Fox” I found it hollow and lacking depth, I see Wes Anderson reaching for something deeper and more meaningful with “Isle Of Dogs” but still coming up too cold and detached for me to emotionally connect.

Mayor Kobayashi (Kunichi Nomura), rules over the futuristic Japanese city known as Megasaki City with an iron will. He has signed a decree which has led to an evacuation of all dogs from the city to a secluded island known as “trash island” due to a dog flu which has been going around and has endangered the citizens of the city with seemingly no cure in existence. Boss (Bill Murray), King (Bob Balaban), Duke (Jeff Goldblum), Rex (Edward Norton) are a pack of dogs led by their alpha male stray dog Chief (Bryan Cranston). One day, the group come across a young 12-year-old boy named Atari (Koyu Rankin), the nephew and ward of Mayor Kobayashi. After crash-landing his plane on the isle of dogs, Atari is aided by the pack of dogs and the reluctant Chief, as together they search for Atari’s dog Spots (Liev Schreiber).

The first highlight I wish to address is the animation style. “Isle Of Dogs” has a unique vision in how it is framed, its color palette and its Japanese aesthetic. We see this bleed over into the costume design, the production design, and the character design. What struck me the most was how much more alive the dogs felt compared to the human characters (With the exception of Tracy Walker, a young foreign exchange student looking to uncover the lies and conspiracy of Mayor Kobayashi, played by Greta Gerwig, who gives her fire and energy). Maybe this was due to the writing, where in one scene, Wes Anderson carefully lays out each of the dog’s name and gives them a definable character trait so we can distinguish one from the other. Or maybe it’s because for the human-centric scenes, the dialogue is spoken without English subtitles and we only understand what is being said by an interpreter, electronic device or title card (As an opening disclaimer before the film starts suggests). This forces the film to have a stop-and-go rhythm to the pacing, aided by Alexandre Desplat’s percussion-based score which prominently features a steady deep drum that slowly bangs away throughout the film. At almost two hours, you can feel the length of “Isle Of Dogs” compared to most animated films which typically run 80 or 90 minutes long.

The moments where the emotion does connect, once again, comes back to the dogs and the life they are given, not just by the animators but by the voice acting as well. Bryan Cranston is perfectly suited as Chief, the stray dog who acts as the alpha dog of the group with a penchant for getting into scraps with other dogs and sometimes humans too. Jeff Goldblum, Bill Murray, Bob Balaban and Edward Norton’s comic timing, delivery, and energy are welcome any time the group is on screen. The film is of course, occasionally funny and sometimes a little dark too. Bitten off ears, shrapnel getting lodged in a young boy’s head, a kidney transfer scene and other moments of gore unquestionably made me realize that this film is for adults and not for younger audiences.

Wes Anderson continues to push the boundaries of what is possible in stop-motion animation and also in his own form of storytelling. As a director that is known for being “idiosyncratic” in terms of his style, “Isle Of Dogs” finds Wes Anderson at his quirkiest and most unusual. His storytelling is bold, the animation is beautiful with more than a number of shots making you wonder “how did they do that?” However, I fear “Isle Of Dogs” is going to struggle to connect with a larger audience. For every moment of warmth between the characters, there is an emotional detachment that seeps through every monotone line of dialogue or abrupt shift in the pacing. Man’s best friend this is not, but still a friend nonetheless.