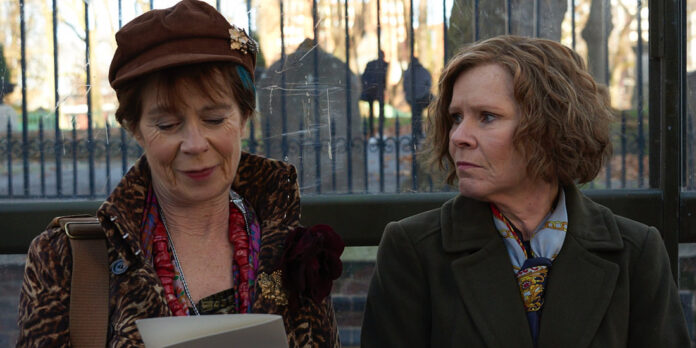 THE STORY – A middle-class snob on the eve of retirement takes refuge with her bohemian sister after she discovers her husband is having an affair with her best friend.

​​​”The Grey Pound” has been one of the biggest (Albeit unflattering) buzz words around the film industry in recent years, as studios discover the economic potential of targeting mature audiences. Nowhere is this more prevalent than in Britain, making full use of its veteran roster to produce a string of box office hits from “The Best Exotic Marigold Hotel” and “The Calendar Girls” to “Philomena” and “Quartet.” Even Hollywood is in on the act with the likes of “Last Vegas” and “Going In Style.” These movies admirably utilize the undiminished talents of Maggie Smith, Judi Dench, Julie Walters, and company to produce narratives that explore the nuances of one’s later years. These films, far from marginalizing these audiences, provide emotional depth and relatability to characters otherwise neglected. “Finding Your Feet” is the latest addition to this slate, as snobby Sandra (Played by Academy Award nominee Imelda Staunton) reconnects with her sister, and rediscovers her roots after unexpected events turn her life upside down.

Sandra is a woman lifted straight from the 1950s and plopped into the pomp of 2018 British aristocracy. Her character is at first unsympathetic and ignorant, an unlikeable stereotype outdated and unengaging for a modern cinema audience. Her reintroduction to the working-class landscape is triggered by the collapse of her marriage, as she is forced to move in with her sister (Celia Imrie) and make the most of her newfound blue-collar lifestyle. The emotional crux of the film lies in Sandra divorcing her “fear of living” and breaking free from the shackles of her uppity prison, but the film does little in the first act to help us root for her.

It becomes immediately clear that we are witnessing a typical romantic comedy playing out, with Celia Imrie’s Bif the catalyst that drives her sister’s transformation, and Timothy Spall’s Charlie the antithesis of her husband and a window into what could have been. It is through their stories and through the challenges this creates by proxy, that Sandra’s real character is unlocked. By the third act she is faced with a critical juxtaposition between the stable and the spontaneous; the life she knows versus the life she wants.

The film has a lot of heart and sure knows how to appeal to a generation who themselves will be scared that life has passed them and it’s too late to do anything about it. The themes of renewal and rediscovery are prevalent in “Finding Your Feet”. However, all things considered, this is not a film that will stand the test of time, feeling more like cashing in on the tried and formulas established by “The Best Exotic Marigold Hotel” than a unique contribution to the genre. The narrative plays out predictably, with plot points introduced practically on cue to serve a single purpose, feeling like a string of overlapping short narratives about the same characters which vaguely serve to take Sandra from A to B. You could argue this is the basic tenant of any screenplay, but “Finding Your Feet” lacks the depth to draw you into its world, so you never really feel invested.

The cast is reliable and, considering the limited scope of their characters, deliver some great performances. Staunton, Spall, and Imrie bring a nuance and a detail that few others are capable of and a collective on-screen chemistry that shined in the more heartfelt scenes, particularly when Charlie is with his dementia-stricken wife.
​
Ultimately there is nothing glaringly wrong with the film, but there is also nothing outstanding. If The Grey Pound was a grocery store then “Finding Your Feet” would be the own brand cereal – it’s not what you came for, but it’s in the sale and it’s palatable so it suffices.