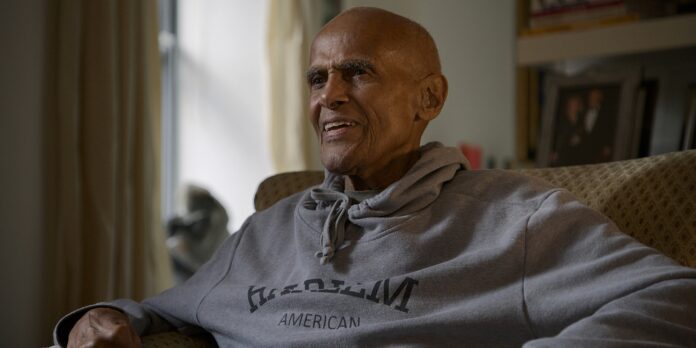 THE STORY – Film critic Elvis Mitchell examines the craft and power of African American films released from the landmark era of the 1970s.

After years of listening to “The Treatment,” NPR’s weekly series hosted by film critic/historian Elvis Mitchell, my admiration for Mitchell’s critical taste (reliably excellent) and his film history knowledge (vast) has only grown. In another life, he would make a great film school teacher.

Much to my surprise, my secret wish to be a student in an Elvis Mitchell film class has unexpectedly come true with the release of his first documentary, “Is That Black Enough For You?!?,” which has the feel of a comprehensive 12-week film course condensed into 135 entertaining minutes. The subject being taught is a huge one — the role of African-Americans in film history –, but Mitchell wisely narrows the film’s focus to the ten-year period (1968-1978) when opportunities for Black artists experienced a historic period of growth.

Far from viewing Black films through a prism of a self-contained world, Mitchell’s approach in “Is That Black Enough For You?!” (which is produced by Steven Soderbergh and David Fincher, themselves knowledgeable film scholars) is making sure that the Black Renaissance of this period is seen within the context of the film industry as a whole.

After the pioneering work in the 1950s by such stars as Dorothy Dandridge and Harry Belafonte (who offers hilariously blunt commentary throughout), Mitchell argues that the real turning point for Black artists was the transition made by Sidney Poitier as he moved from being just a Black face in a white movie to a box office force to be reckoned with. After two of Poitier’s 1967 films were among the five Best Picture Oscar nominees, his popular success only grew, and the studios began to recognize that Black could mean green at the box office.

Like any good filmmaker, Mitchell is a great storyteller, and here he guides us point-by-point through the elements that caused this Black Renaissance to emerge. Beyond Poitier, Hollywood had few bankable Black stars at the time, so the studios began to recruit African-American filmmakers such as Ossie Davis and Gordon Parks to tell their stories. Much to the relief of cash-strapped MGM, one of Parks’ films, “Shaft,” hit the box-office mother lode, becoming a cultural touchstone that attracted moviegoers of all ages and races.

While white male movie stars of the early 1970s were being drawn to sullen anti-hero roles, “Shaft” star Richard Roundtree, along with ex-football stars Jim Brown and Fred Williamson, stepped into that void, offering audiences a new kind of swaggering hero. With their big guns, cars, and finely-tailored suits, they became fantasy figures for audiences longing for some old-fashioned heroism in the movies.

But Mitchell also spotlights the innovations made by Black independent filmmakers of the time, particularly those by Melvin van Peebles with his groundbreaking “Sweet Sweetback’s Baadasssss Song.” Not only did van Pebbles upend the movie rating system by hijacking the X rating and self-applying it to his own film (and thereby using that as a selling tool), but he also pioneered the practice of releasing the film’s soundtrack weeks ahead of the movie’s release, priming audiences for the film in advance, a practice that was most successfully used by Curtis Mayfield in his legendary soundtrack to “Super Fly.”

No look at the films of this period, however, would be complete without addressing the issue of “blaxploitation” — the term used to describe how the profits from Black-themed films primarily lined the pockets of the largely-white writers and producers, with little trickling down to the Black artists themselves. Rather than explain blaxploitation in academic terms, Mitchell allows the very artists who were ripped off to explain the pain and disrespect that the practice laid upon them, a situation that helped to bring about the decline of this decade of Black opportunity.

As intellectually impressive as Mitchell’s arguments are, he never forgets that he’s making a movie, so each major point made in the narration is backed up with a film clip — lots of clips, happily — to illustrate his every argument with visual proof. It proves to be a smart move on his part. Still, at times, there are almost too many details included here, an information overload that’s often challenging for audiences to process, given the film’s brisk pace.

Still, what keeps us engaged in the documentary is Mitchell’s evident love of the period and respect for those Black artists who were, for that brief time, able to show to a worldwide audience just what they had to offer, a personal touch that draws the audience ever closer as the film makes its case. Mitchell even opens the film with a touching remembrance of his grandmother — “The movies changed the way she dreamed. They turned her dreams into something resembling stories.” Those stories are what “Is That Black Enough For You?!?” is all about.

<b>THE GOOD - </b>Elvis Mitchell's documentary, which chronicles the rise and fall of Black films from 1968-1978, has the feel and intellectual heft of a 12-week film course condensed into 135 enormously entertaining minutes.<br><br> <b>THE BAD - </b>There's almost too much detail included here, an information overload that's often challenging for audiences to process, given the film's brisk pace.<br><br> <b>THE OSCAR PROSPECTS - </b>None<br><br> <b>THE FINAL SCORE - </b>7/10<br><br>"IS THAT BLACK ENOUGH FOR YOU?!?"