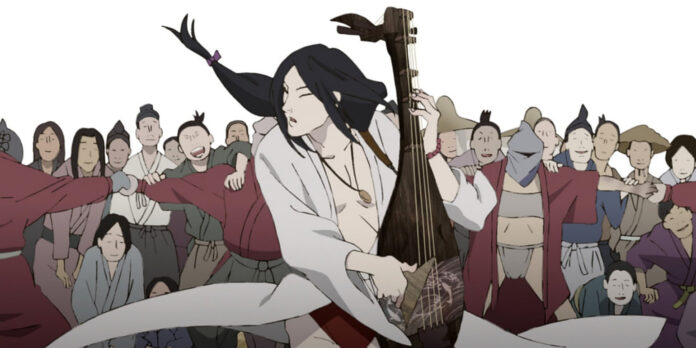 THE STORY – Inu-Oh is born with unique physical characteristics, and the horrified adults cover his face with a mask. One day, he meets a boy named Tomona, a blind biwa player, and as Tomona plays a delicate song, Inu-Oh discovers an incredible ability to dance.

8/10/2022
By Tom O’Brien
​
In a film genre filled with iconoclastic artists of all stripes, anime director Masaaki Yuasa has stood out from the pack by forging a singular artistic path that he has truly made his own. In his six feature films, Yuasa has embraced stories of love and acceptance, focusing particularly on society’s outcasts, and he tells those stories with a bold visual style that has both thrilled critics and surprised audiences.

Perhaps what’s most surprising about Yuasa’s new film “Inu-Oh,” however, is that there is no surprise at all, at least in the film’s first act. A brief historical prologue details how one clan, the Heike, was soundly defeated in a 12th-century naval battle by their rivals, the Genji. The narrative then jumps two centuries to where the Heike, still subjugated, nevertheless gather to pass along their history and traditions to a new generation.

There we meet two boys: Tomona, who, blinded by a spell, learns to master the biwa, a musical instrument that accompanies the telling of Heike tales. The second boy, whom we will later come to know as Inu-Oh, is deformed via a curse, with a six-foot-long right arm and a face so disfigured that he must hide behind a gourd mask. As a social outcast, Inu-Oh enjoys using his physical features to scare people, but he finds that the only person he cannot scare is Tomona, who, being blind, cannot see his deformities. Instead, he can only sense the wounded boy inside, and the two become fast friends, a bond that lasts into adulthood.

That’s the moment when Yuasa tips his narrative hand. Still outcasts from society, Tomona and Inu-Oh decide to team up to tell the Heike stories their way — through rock and roll — and at once, Yuasa’s careful historical drama becomes a full-blown rock opera. Tomora’s suddenly-electronic biwa sets the stage as he becomes Inu-Oh’s hype man — kind of a 14th Century Flavor Flav — and Inu-Oh’s entrancing mixture of music and dance draws in the local villagers, draining the audience from the Shogun’s more traditionally-performed music. Inu-Oh’s vocals, provided by Japanese rock singer Avu-chan, highlight his soaring tenor range that very much resembles the style of Freddie Mercury. More importantly, the manner Yuasa uses songs as a non-stop driver of the movie’s dramatic action jet-propels the storyline, with an approach much closer to, say, “Streets of Fire” than “Bohemian Rhapsody.”

Doubling down, Yuasa even turns Tomona and Inu-Oh’s makeshift group into an ’80s hair band, complete with long locks and heavy makeup — a homage to Japanese Noh theater mixed with just enough androgyny to complete the provocative picture. For the Shogun, whose own audiences have dwindled with the rise of Inu-Oh, and the Heike priests, who have considered the clan’s stories to be their territory and resent Tomona’s theft of them, this will not stand.

As dazzling as Yuasa’s concept and visuals may be in “Inu-Oh,” the film’s narrative path suffers from a few bumps along the way. For example, the film’s history-filled prologue throws so much exposition at the viewer that it’s tough to sift through it all, a hurdle that unnecessarily gets the film off on the wrong foot. And as much as I love the Inu-Oh vocals by Avu-chan, most of the songs feel like very extended versions — at half their length, they’d be twice as effective.

Still, when Yuasa connects (which is most of the time), “Inu-Oh” is a thrilling example of how the imaginative use of visuals and music can bring new life to even the most traditional stories. There’s a reason that those stories have endured over the centuries despite different ways of being told. Yuasa clearly respects the history behind these tales, and even throughout his wild imagery, he never loses the thread of the story. He just gives it a little more bass.