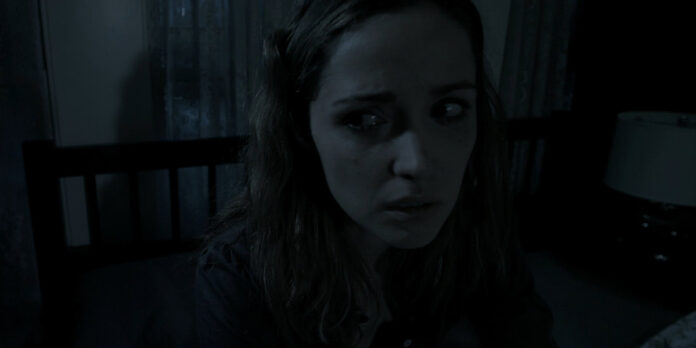 THE STORY – Parents (Patrick Wilson, Rose Byrne) take drastic measures when it seems their new home is haunted and their comatose son (Ty Simpkins) is possessed by a malevolent entity.

​​Horror maestro James Wan has easily been credited with resurrecting the “gore-worship” subgenre of horror films (“Saw“). He also could possibly be credited with the resurrection of the jump scare. While the jump scare has been around since the inception of horror, nobody executes them quite like Wan does. While he flexed a few muscles early on in his career with “Saw” and “Dead Silence,” he truly began to hone in on this rather specific style in his 2010 “Poltergeist” inspired film, “Insidious.”

James Wan has stated that “Insidious” is practically a beat for beat remake of the late great Tobe Hooper’s 1980’s horror classic, “Poltergeist.” “Insidious” revolves around the Lambert family and their experiences with evil spirits. When they move into a new home they begin experiencing some supernatural occurrences. When their son Dalton (Ty Simpkins) goes into a “coma”, the terrifying situations involving these evil spirits increases. It is only with the help of an old family friend, Elise (Lin Shaye), who helps them realize that it is their son that is haunted not their home.

The screenplay for “Insidious” is penned by frequent Wan collaborator Leigh Whannel. Whannel’s screenplays are typically pretty one note and focus on building the tension to one crescendo of terror. That technique is on full display within “Insidious” for each individual scare is meant to build until the climax where it just a non-stop flurry of scares. Whannel and Wan will often space out their scares in a systematic manner so that you aren’t expecting the next jump waiting around the corner. However, when we reach the pinnacle of the third act there is nothing else happening but the scares.

But is the jump scare a cheap tactic when it comes to the horror genre? Well, it depends on who you ask. When done correctly, the jump scare can be used to maximum effect and lead to great success for horror films, as that it exactly what audiences are paying to see and feel. But a majority of the time they are used to get a brief reaction from the audience with little to no pay-off. Wan uses it in two ways. The first is how most modern horror directors use it. He wants a brief reaction out of his audience and he likes to get the hairs on the back of their neck to stand straight up. But he also likes to get these small moments of freight out of the way so he can butter up his audience and get them used to that style of horror so he can then turn the tables on them later on when they fall into a false sense of security.

As James Wan’s stories progress, so do his scare tactics. Instead of just constant screaming and loud audio cues, he’ll draw that feeling of dread out. A scare sequence will sometimes take as long as a few minutes. This style is really apparent and is a central focus to making “Insidious” work. He went on to continue this style in his later films (Such as “The Conjuring” series) but this is where he really began to shine in that aspect. From having to wander through uncharted territory and face their worst fears, to a full-on chase scene with a demon, the scares are meant to drag on as the story reaches its peak.

However, some other aspects of the first “Insidious” film are lacking. The cinematography is not necessarily anything special. Whenever the film ventures into a place known as “The Further,” the cinematography does see an uptick. However, everything outside of that has a washed out, gray appearance to it that is unappealing and makes “Insidious” look amateurish. While this may have been done to achieve a sort of physical separation between the real world and the spirit world, it still is not visually appealing. Aside from the lighting design, there are some pretty intriguing compositions. Utilizing a forced perspective in a lot of scenes to impose freight on the audience is very much effective.

The acting is actually quite enjoyable for the most part. Whannel actually stars in the film as the comedic relief alongside Angus Sampson and while that does not work a majority of the time the other performances are quite admirable. Lin Shaye is solid as the psychic spiritual advisor. Ty Simpkins is quite possibly the MVP as the terrified little boy just trying to find his way back home. And as always, Rose Byrne and Patrick Wilson are stellar in their hunt for their son. Hell-bent on finding him we can truly get a real sense of genuine fear from their performances.

“Insidious” is not a perfect film and it did not chart any new ground for the horror genre. However, James Wan and Leigh Whannel continued to do what they do best in this third collaboration, which is scare and entertain audiences. Despite some unpleasant visuals from time to time and some cringe-worthy performances, the film proved to be quite a scare fest and spawned a number of sequels as a result. “Insidious” is not James Wan’s best horror film by a long shot, but it was certainly interesting to watch him flex his muscles and find his footing as a director.