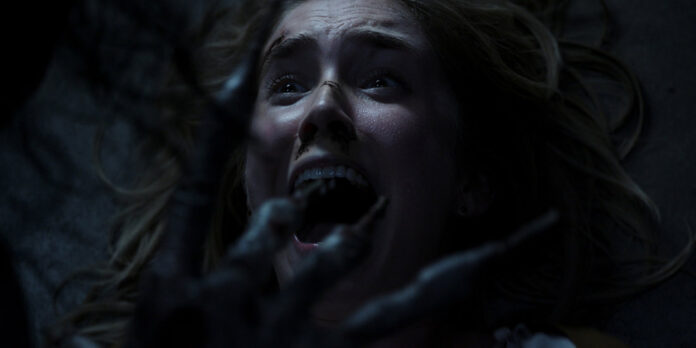 THE STORY – Brilliant parapsychologist Elise Rainier receives a disturbing phone call from a man who claims that his house is haunted. Even more disturbing is the address — 413 Apple Tree Lane in Five Keys, N.M. — the home where Elise grew up as a child. Accompanied by her two investigative partners, Rainier travels to Five Keys to confront and destroy her greatest fear — the demon that she accidentally set free years earlier.

“Insidious: The Last Key” is a piss poor entry to an already lackluster franchise. As if the previous films (That’s the second and third installment) didn’t dig themselves into a deep enough hole, this film takes them even further down below to the very depths of hell. With a ridiculous screenplay filled with downright silly dialogue, an uninteresting and unoriginal story, and predictable scare tactics, “Insidious: The Last Key” is the usual bad horror movie that releases every January (See “Rings” last year). Director Adam Robitel’s sophomore slump, “Insidious: The Last Key,” leaves a bad taste in your mouth.

When gifted psychic Elise Rainer (Lin Shaye) returns to her childhood home to assist a man having troubles with a spirit, she realizes there is something truly evil still residing in that house. With the help of her “ghostbuster” friends Specs (Leigh Whannel) and Tucker (Angus Sampson), Elise must track down this entity and put a stop to it once and for all. If this story sounds all to familiar well that’s because it is. It’s practically the plot to the other three “Insidious” films and while those had at least some interesting plot points, this has none.

The story for the film is just your basic haunted house story that we have seen time and time again. Director Adam Robitel and screenwriter Leigh Whannel attempt absolutely nothing new with this film making it a bore from start to finish. None of the progressions made within the story are warranted or even actually make sense. There are times where characters we have only seen on screen at one other point in the film come running to the rescue and actually end up being the saving grace to the entire story (Huh?). The characters are just thrust into these scenarios that are just rehashed from the prior films in the franchise. Instead of attempting to take the final installment in a bold and new direction, they simply stick to the cookie cutter foundation that was laid before.

However, despite all of the poor storytelling choices, there are actually a few pluses. Lin Shaye is absolute dynamite as always. She’s probably the only admirable performance in the film and she knocks it out of the park. There are quite a few shots that are pretty stunning. Some of the long takes in the scare sequences and brief moments of dread are actually well composed and lit (Compared to the first film which did not have the most appealing visual aesthetic). The other thing that stands out notably more in this entry than the others is the score. While there is the typical creepy string instruments we hear in every other horror film, there are a couple of moments where the score actually adds some layers to the visuals on screen. Whether it be the dynamic use of the strings or even some electronic soundscapes, the score in this film is rather splendid.

“Insidious: The Last Key” is not a total train wreck but very little actually works. While the score is quite riveting and Lin Shaye gives a good performance, everything else is terrible as per the norm for a standard horror film released in January. The storytelling choices are jumbled, confusing and the characters are just there to take up physical space on screen. Though this does not prove to be the swan song we were hoping for, it does manage to let us take a breath of fresh air in thanks that it is all over.