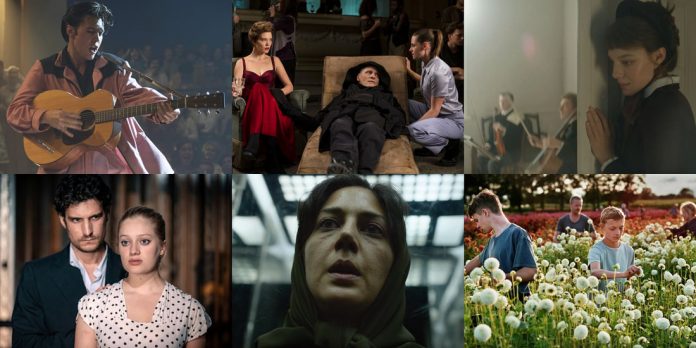 The official line-up to the 75th Cannes Film Festival was announced this morning, showcasing the films that would be competing for the coveted Palmes d’Or and the films that would make their world premiere at the prestigious event. While the list of films is shorter, with only 18 films announced for the Official Competition instead of the 24 last year, there is plenty to look forward to and analyze with this year’s selection. Not only that but there are still plans to announce more films before the festival takes place in May.

Over the past few weeks, many film fans have been trying to predict what would end up showing at the festival. One of those predictions on people’s radars was an unknown project by David Lynch, which would have been fantastic to see make the cut. However, it turns out that his statements about not being at the festival are currently true, and it will be interesting to see if one of his films makes a surprise appearance in a future announcement. Many fans were also hoping for a glimpse at the latest work by the likes of Ari Aster and Jordan Peele, but it will have to be a longer wait before we get to see either “Disappointment Blvd.” or “NOPE.”

Let’s not dwell on the films that did not appear on the list anymore, though, as the line-up we have received this year looks promising. We’re getting new films from Kore-eda Hirokazu (“Broker”), Kelly Reichardt (“Showing Up”), Ruben Östlund (“Triangle Of Sadness”), Park Chan-Wook (“Decision To Leave”), and Cristian Mungiu (“RMN”), which will all surely help to make the 75th anniversary of the festival stand out. In what might be the section with the biggest surprises, the Midnight Screenings line-up includes the directorial debut of Lee Jung-Jae, the leading actor from Netflix’s “Squid Game” last year. Lee is not the only actor stepping behind the camera, as “Zola” leading actress Riley Keough’s debut with fellow director Gina Gammell is an Un Certain Regard selection. With Lee and Keough having a strong 2021, it is great to see them both get a spotlight at Cannes and continue towards that momentum.

A couple of films that are Out of Competition selections were announced previously, but it is still hard not to be excited for them. There has been a lot of anticipation for “Top Gun: Maverick” due to the numerous delays the film has had, and it has also been announced that Cannes will be doing a tribute to Tom Cruise during the festival. Additionally, Baz Luhrmann’s “Elvis” is sure to make Austin Butler a star, especially with the premiere taking place during the festival. The confirmation of George Miller coming back after “Mad Max: Fury Road” with a Cannes premiere for “Three Thousand Years of Longing” already has fans excited to see what he comes up with this time, and it will undoubtedly be a top priority for fans and critics going to the festival.

The opening film of the festival, “Z (Comme Z)” or “Final Cut,” will finally premiere after pulling out of the Sundance Film Festival earlier this year due to the festival’s move to a streaming platform to accommodate those affected by the COVID-19 pandemic. A French remake of “One Cut of the Dead,” the Oscar-winning director Michel Hazanavicius is sure to have a lot of fun setting the festival’s tone, even if it is not competing for the Palme d’Or. There is no word yet on what film from the Un Certain Regard selection will be the opener from that line-up as of now.

As exciting as the premieres and midnight selections are, it is the Official Competition line-up that is always to look out for when it comes to Cannes. This year’s list may not have David Lynch or Ari Aster, but it has some big names and exciting projects. The one with the most word of mouth due to heavy marketing from distributor NEON is David Cronenberg’s “Crimes of the Future.” Starring Viggo Mortensen, Lea Seydoux, and Kristen Stewart, the trailer already highlights how insane this film may end up being. Could Cronenberg do the same after “Titane” shocked audiences and won the Palmes d’Or in 2021? It’s very well possible. James Grey also makes an appearance in the Official Competition line-up with “Armageddon Time,” his first film since “Ad Astra.” With this being one of the few films in the line-up this year to have Oscar buzz this early in the race, I am intrigued to see if this film is more accessible than his previous outing.

Claire Denis continues to prove that she is one of the hardest working directors in the industry, showing up at Cannes with “Stars at Noon.” While “Fire (Both Sides of the Blade)” may have split audiences when it showed at Berlinale earlier this year, “Stars at Noon” looks like it has even more potential with A24 distributing and Margaret Qualley and Joe Alwyn leading the film. It must also be said that although her inclusion is a prominent one, this year’s list of female directors in Competition is well below what Cannes should be aiming for as there are only three women represented for the 7th anniversary of the most significant film festival in the world. Suffice to say, a lot of work is still needed in that area.

There is still a lot to find out about this year’s Cannes Film Festival before it officially takes place May 16th-27th. There is still the announcement about the Jury and additional films that will be shown during the festival, both of which may change how the competition shapes up. For now, though, it is clear to say that the team has done a fantastic job curating this year’s line-up, and the shorter list may just make it easier for attendees to pack more into their schedule and focus on the quality that will be on display. As someone who has their press pass and traveling plans ready to go, I could not be more excited about this year’s line-up.

Which films are you looking forward to the most at this year’s Cannes Film Festival? Are you attending this year? Maybe I’ll see you there! Do you have any early Oscar predictions to make from the list of announced films so far? Let us know in the comments section below or on our Twitter account.