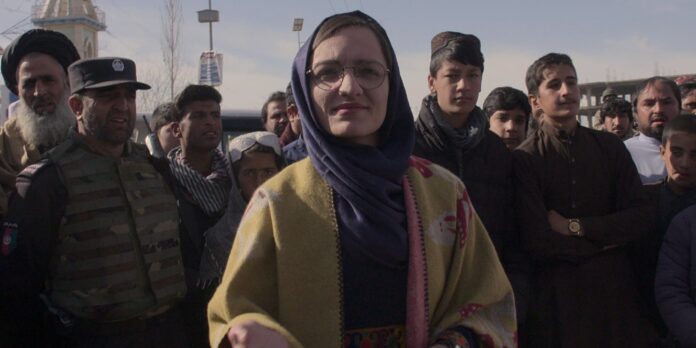 THE STORY – At 26, Zarifa Ghafari, became one of Afghanistan’s first female mayors and the youngest to ever hold the position. Filmed over two turbulent years, the film documents her personal battle for survival as her country unravels.

Sometimes, it can be a struggle to rate and review documentaries, as, at a certain point, you feel like you’re just rating and reviewing the story itself or how engaged you specifically were in it. That’s why it’s up to documentarians to make their subject matter absorbing to anyone and everyone regardless of what their former attachment to the said subject matter may be – if it exists at all. This can mean structuring and pacing your documentary like a political thriller (as was the case for 2017’s Oscar-winning “Icarus“), impressing your audience with astounding visuals (such as those found in 2018’s Oscar-winning “Free Solo” or this year’s “Fire of Love“), or creating an innovative cinematic experience that defies all standards for modern moviemaking (Brett Morgen’s “Moonage Daydream,” also from this year, comes to mind). However, while Marcel Mettelsiefen and Tamana Ayazi’s “In Her Hands” has a stellar subject – Zarifa Ghafari, one of Afghanistan’s first female mayors and the youngest ever to be appointed (at the age of 24) – it frustratingly lacks focus, giving us little insight into how she came into this position of power by instead capturing the chaos that preceded the Fall of Kabul (Afghanistan’s capital city) in August 2021 and Ghafari’s place in it, until she’s lost in the shuffle in her own story.

Ghafari’s life is a legendary one. Though there had been two female mayors in Afghanistan prior to her time in office, they presided over areas that were generally seen as more “culturally tolerant.” Ghafari, in contrast, held a position in a traditionally conservative province named Wardak, where the Taliban had widespread support – so much so that her term as mayor of Maidan Shahr had to be delayed for a period of nine months due to protests and threats about her age and gender (and on her first day, a group of men even mobbed her office and warned her to resign). Ghafari ran on messages of female empowerment and enlightenment, advocating extensively for a woman’s right to education, and she also sought to better her community for all, successfully introducing an anti-litter campaign in her town. However, as tensions between her and the Taliban escalated – as a result of several failed assassination attempts and the death of her father by gunmen in November 2020 – she was always in danger of losing not only her political position but also her life, even though she resided in Kabul instead of Maidan Shahr. This period of time is what “In Her Hands” seeks to survey, along with her eventual escape from Afghanistan after the Taliban took over Kabul last summer.

“In Her Hands” is undoubtedly an intense watch at times – there are more than a few terrifying “close calls” captured on camera as Ghafari attempts to evade the Taliban – but when almost all of its 93 minutes are devoted to this one small stretch in Ghafari’s life, it starts to feel like a bit of a missed opportunity to inform a wider audience on all she’s accomplished, and how she got to where she is today. Most who stumble upon this documentary while scrolling through Netflix might not have any idea who Zarifa Ghafari is and all she’s endured, and after watching this, they still won’t – and that’s a problem. We hear of certain goals of hers – her engagement with education efforts is oft-repeated – and we experience certain traumatic events alongside her (such as the aforementioned death of her father), but with little context as to who this woman is outside of being the youngest major in Afghanistan history and one of its few female mayors ever, it’s unfortunately easy to lose interest from scene to scene, and the scattered storytelling doesn’t help (nor does the dreadfully bland narration).

Why is the storytelling so scattered, and why is Ghafari’s life lost in the shuffle of a film seemingly made solely to share it with the world? That’s because Mettelsiefen and Ayazi make a choice to balance their coverage of her conflict with the Taliban by also intensively interviewing and investigating the latter, hearing their view on her political ascendency, and following them on a few of their crusades throughout the country. Sure, maybe this is worth exploring for one scene, but revisiting the Taliban so often – at the expense of the woman whose life they are endangering – does the entire film a disservice. Not only is the time we spend with Ghafari simply a straightforward telling of history (and not the parts we’re most interested in), but there needs to be more of it. Her storyline comes to life in scenes like those that explore her engrossing romance with now-husband Bashir Mohammadi or her occasionally fraught relationship with her father, but imagine how much stronger it could be if the whole movie were actually devoted to these moments. And not just these, but those that show how we got here in the first place.

<b>THE GOOD - </b>Zarifa Ghafari is a supremely interesting subject with an already legendary life ripe for a film adaptation, and her struggles are sincerely affecting.<br><br> <b>THE BAD - </b>The documentary lacks focus, somehow losing sight of Ghafari's story from time to time to offer additional in-depth coverage of the Taliban instead, and it also never fully explores how she became the political figure she is today.<br><br> <b>THE OSCAR PROSPECTS - </b>None<br><br> <b>THE FINAL SCORE - </b>4/10<br><br>"IN HER HANDS"