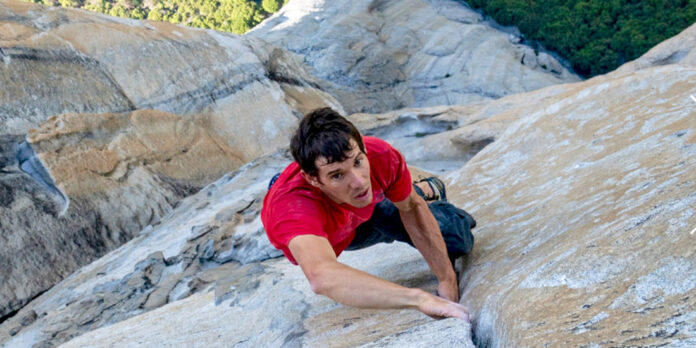 ​This is a year that should be known as a banner year for documentaries. In all honesty, I can’t quite remember a time where not only so many quality films were released in this medium but also caught the attention of the public at large. It is a very encouraging sign to me that this art form, which has always had the reputation of being designated to the art house, might still have life in the mainstream as well. “Free Solo” is yet another well-made documentary to be released this year, and it deserves to be seen for its stunning presentation.

The subject of the film is Alex Honnold, known throughout the world as one of the most experienced and famous mountain climbers. Alex’s notoriety has an even greater distinction because he is one of the few climbers who often will scale mountain cliffs without the assistance of a rope or other safety equipment. This is the act known as “free soloing.” Alex is gearing up to climb the El Capitan Wall in Yosemite, a rock formation that measures at some 3,000 feet. His training is intricately detailed, as well as every harrowing step he takes during the climb.

Alex is a particularly fascinating figure to build the film’s narrative around. What is presented is a portrait of a seriously dedicated performer, one whose passion for this dangerous activity knows no limits and must be pursued at all costs. The tenacity that he shows comes across as both impressive and insane. This is especially felt with his blunt worldview about how little he seems to value life in general and why that perspective makes him push harder. The isolation he feels with people forces him to take in that solace with the free solo climbs, and the film offers an intriguing window into the mindset of a man consumed by his endeavors.

At the same time, that worldview is constantly challenged by the introduction of his girlfriend, Sandi McCandless. She attempts to be the voice of reason, urging him to look beyond the horizon of his goal and see the ultimate damage he could inflict on himself and his loved ones. It’s a dilemma that has its merit, though if this were a narrative film, it would certainly come across as a cliched motivation. Still, her worry is genuinely felt, and it creates a new dynamic within Alex that he must overcome, always in his straightforward and somewhat harsh tone.

The portrait of Alex is not the only place the film shines, however. The filmmaking that was assembled to create the climbing sequences are absolutely astounding. Directors Jimmy Chin and Elizabeth Chai Vasarhelyi provide an incredible amount of tension in every step that is taken and every crevasse that is reached for. The open photography gives a grand scope to this event and sells the absolute danger that Alex is in. It’s quite an immersive experience, and certainly induces a great amount of anxiety while watching it. But that is all in service to have the viewer come away with the true understanding of the level of difficulty, and there is a great appreciation for all that went into capturing this moment. It is exceptionally well done to see this impressive stunt pulled off.

While the film is incredibly engaging, it does suffer from some pacing issues, especially at the beginning. There is a bit of awkwardness in establishing Alex as a character, of sorts, and it never really comes across as truly organic. The training sessions before the big climb, while impressive, also feel a bit repetitive at a certain point and feel a bit tiresome as you’re waiting for the finale. Also, and this is a very minor complaint, but there was an obvious attempt to censor some bad language in the film. While I understand the reasoning, noticing its omission feels like being cheated out of a certain authenticity, especially when there are some momentous occasions that would deserve such exclamations. Again, a minor issue, but one that does take the enjoyment of the moment away ever so slightly.

Even though “Free Solo” may drag and spin its wheels in some parts, most of that does not take away from its grandiose achievement. Obviously, so much care and attention were put into making the climbing scenes feel as real as possible, and they are truly the exceptional highlights to the film. However, there is also a fascinating commentary about what motivates this man to pursue his passion no matter what, and where that tenacity ultimately leads one in personal ambition. Overall, it is a thrilling ride and is definitely worthy to be seen, especially on the biggest screen you can find.​