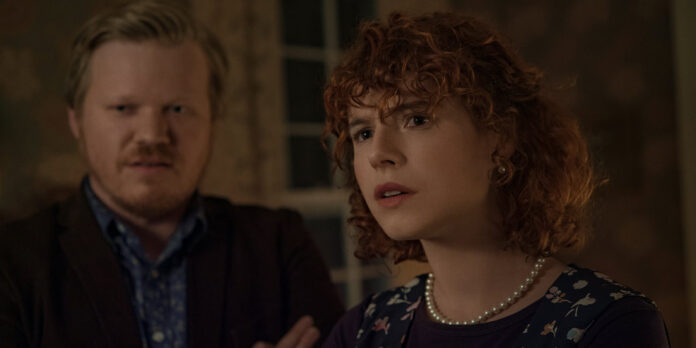 THE STORY – Full of misgivings, a young woman travels with her new boyfriend to his parents’ secluded farm.

Charlie Kaufman is one of the most brilliant minds working in cinema today. Exploding on to the scene with an Oscar nomination for his 1999 breakout film “Being John Malkovich,” he would receive his second Oscar nomination three years later for “Adaptation” and then win an Oscar two years later for “Eternal Sunshine Of The Spotless Mind.” Moving into the director’s chair, Kaufman has given us his most “Kaufmanesque” films yet with “Synecdoche New York” and the Best Animated Feature nominated “Anomalisa.” His latest film (and his first with streaming studio Netflix) is “I’m Thinking Of Ending Things,” based on the novel of the same name by Iain Reid. With it, Charlie Kaufman not only delivers another painfully awkward, deliberate, intellectual, and melancholy dive into the human psyche but he rewrites the rules of cinema with what is easily his most ambitious directorial achievement yet, despite the film’s seemingly simple premise. Don’t worry. I dare not spoil a thing with this review. Kaufman’s latest needs to be seen to be believed and through the power of Netflix, will most likely need to be seen again, and again, and again, and again…

A young woman (Jessie Buckley) has been in a new relationship with her boyfriend Jake (Jesse Plemmons) for about a month now. Tired and filled with doubts about the future of their relationship, she apprehensively takes a road trip with him in a snowstorm to meet his parents (Toni Collette and David Thewlis) on an old farm where Jake grew up. When she arrives, nothing is as it seems. Now, she is trapped and begins to not only question her relationship to Jake but she questions herself, everyone else, and everything else in the world entirely.

Kaufman works for the first time with Academy Award-nominated cinematographer Łukasz Żal (“Ida” & “Cold War“) to give us some of his most technically accomplished work as a director yet. Every frame of “I’m Thinking Of Ending Things” looks absolutely gorgeous and the decision to shoot in the condensed Academy ratio is not only fitting with Żal’s previous work but it also helps us to concentrate on the main character’s isolation, loneliness, and perspective. An exercise in visualizing a stream of consciousness, every choice within Kaufman’s latest has been well-thought-out beforehand. It’s safe to say you will not know what you’re watching while you’re watching it. “Why is this scene so long?” “Why did the camera move that way?” “Why was that edit placed there?” “Why did the lighting suddenly change?” There are at least a dozen questions that will be spinning through your mind as you try to take in what Kaufman is not only presenting on an aesthetic level but you’ll also have to process his theatrical, meaty, and highly intelligent dialogue on top of all that.

To say that watching “I’m Thinking Of Ending Things” is exhausting is an understatement. I’m sure editor Robert Frazen had a daunting task in front of him when he first read the script and heard Kaufman’s vision for how each scene should play out. The result is one of the most tightly controlled films you will see this year and maybe not for all the reasons you’d expect or hope for. At almost two hours and fifteen minutes long, it’s painfully (but deliberately) slow at times, with dialogue scenes lasting up to a half an hour in a single location as two characters trade verbal jabs back and forth on a variety of subjects including movies, art, culture, literature, human existence, and everything in between. One such conversation revolving around John Cassavetes’ 1974 film, “A Woman Under The Influence,” suggests that everything Kaufman is presenting is “All planned but not thought out” as it feels like characters are saying a lot without actually saying anything at all. It’s one of the more bizarre and insightful peaks into Kaufman’s mind through his characters’ dialogue and there are various examples of this, even when Kaufman does away with dialogue altogether and finds other methods through the cinematic language to tell his story. Less a straight adaptation of Ian Reid’s novel, Kaufman keeps the bones of the novel’s plot intact while putting his own spin on it. Those who have read the novel may be upset by how much Kaufman changes it but in my opinion, he not only finds a unique and compelling way to adapt the story but he makes it entirely his own, allowing it to stand apart from inevitable comparisons to the book.

The performances from the four principles are all phenomenal, as repeat viewings reveal the layers of their intricately subliminal work. Almost theatrical in how the actors are staged, Kaufman blocks each of his scenes and actors in a way that gets us to hone in on the actors’ performances. Jessie Buckley’s star continues to rise as she takes the role of a disinterested girlfriend, stuck in a relationship she wants out of by the neck, and runs away with it. She is our emotional guide through Kaufman’s puzzling story and for many, this will be their first real exposure to her if they have not already seen her equally amazing work in “Beast” and “Wild Rose.” Jesse Plemmons has perhaps the most difficult role in the film as an intelligent young man who’s mind is impressive but literally everything else about him, from the way he speaks to his clothes and his upbringing, is not. It’s a thin line he needs to walk as he could potentially bore us, the same way he has alienated his girlfriend after only being together for a month…or has it been seven weeks?…Toni Collette and David Thewlis are only in the film for about a third of it but they do not disappoint as they make a tremendous impression with their over the top and fun performances. It is when all four of these actors share the space simultaneously that the film’s most uncomfortable moments occur. While it never veers into the realm of horror, this is probably the closest Charlie Kaufman will ever come to making a horror film.

There’s so much to write about with “I’m Thinking Of Ending Things” that I could spend another thousand words easily on all of the topics I did not touch upon with my review here today. I cannot stress enough, how much you should not only avoid spoilers beforehand but perhaps you should even pick up the novel (it’s a fast read) for a little added context. What Charlie Kaufman has crafted here will surely challenge viewers and force us to question if the 61-year-old filmmaker is alright up in the head himself. To get this kind of a vulnerable vantage point into one of the most brilliant minds working in the film industry today is not only fascinating but also sad and disturbing. Most audiences will not want to spend that kind of a depressing time with this material, its characters, or its creator but I maintain that Kaufman’s voice is not only necessary but vital. With “I’m Thinking Of Ending Things” this is the leap where we will look back and realize that Charlie Kaufman cemented himself not only as a great screenwriter but as a great director. I sincerely hope he doesn’t slow down, though I’m sure time will be kind to him as he has been kind to it. Giving it its due, understanding its purpose, and making us constantly question, how we are using it.