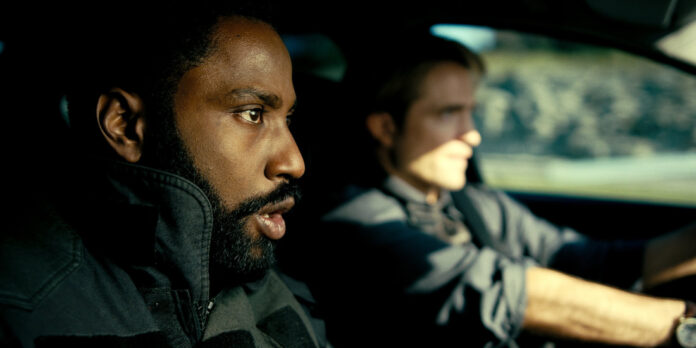 That is the advice given to John David Washington’s unnamed protagonist early in “Tenet.” Christopher Nolan’s latest directorial effort is most enjoyable when viewed with that same advice in mind. “Tenet” is a time-bending, mind-boggling puzzle of a film, one that will surely take multiple viewings to piece together. It would be easy to be frustrated by it. The plot is buried within the construct of people moving forward and backward in time, sometimes both at once. Once we take Nolan’s advice and stop trying to understand the film, we’re able to truly enjoy it for the incredible thriller that it is.

Right away, it’s easy to see how this is Nolan’s version of a James Bond film. It’s a globe-trotting thrill ride, full of espionage, gadgets, and more. The film opens with a literal bang as a group of agents descend on a symphony performance in Kiev. It’s an intense opener that leaves little time to breathe, much less orient ourselves in this world. Washington stars as The Protagonist, one of these agents who survives the brutal mission. He’s presumed dead, making him the perfect recruit to take on a new top-secret one.

Of course, it wouldn’t be Nolan’s version of a Bond film without some unique relationship to the concept of time. The Protagonist is introduced to the new technology of “inverted” objects. Their entropy has been reversed, making them travel backward through time. Mysterious and villainous forces have gotten their hands on this technology, threatening the very fabric of time itself. Inverted bullets have been brought back from the future by arms dealers who our hero must track down. The Protagonist recruits Neil (Robert Pattinson) to join him on the mission.

Soon, their journey leads them to Andrei Sator (Kenneth Branagh), an uber-rich Russian arms dealer and megalomaniac. Sator is an abusive man obsessed with his power and threatens to use the inverted technology to shape history to his benefit. Branagh clearly relished this role, and it’s the best performance in the film. He’s genuinely terrifying, but the “Bond-villain” sort of scary where there’s a hint of enjoyment in the performance. While the film’s overly muddy plot makes it difficult to follow, Branagh’s chilling performance provides plenty of tension to keep us invested. Neil and The Protagonist use Sator’s estranged wife Kat (Elizabeth Debicki) as their way in. While Debicki gives a wonderful performance, her character is largely a damsel in distress, leaving her with little to do for much of the film other than be rescued by our hero. It’s unfortunate.

It feels as though “Tenet” spends a great deal of time explaining why and how things are happening, though little of the exposition sticks. Everything moves so fast that it feels like Nolan doesn’t want us to dissect it in the moment, perhaps to create a more rewarding experience on repeat viewings or to just encourage the viewers to enjoy the action. The film is packed with some of the best action of Nolan’s career, and it’s easy to get swept up in the thrill of it. Much has been written about how few visual effects are used throughout the film, an impressive feat considering the high-concept premise. Certainly, the film feels visceral and intense thanks to tight editing and stunning cinematography. Also, adding to the visceral nature of the overall experience is that it’s extraordinarily loud. Like some previous Nolan films, the sound mix is more interesting than actually understandable. Too often dialogue is hard to understand, either drowned out by the soundscape, score, or use of masks within the film.

We leave the theater with very little understanding of why the characters needed to do what they did for the majority of the story. It’s not simply the time-bending nature of it that’s confusing – much of the basic motivations or goals of the characters are a mystery. We wouldn’t blame someone for giving up at the sheer exhaustion of trying to keep up with the story. And yet, we somehow also leave the theater knowing we quite enjoyed what we had just seen. Despite the lack of understanding, the action is so thrilling that we can’t help but be entertained. “Tenet” is an intense blockbuster that doesn’t let up, and we’re swept along with the momentum of it all. Don’t try to understand it, just feel it.

Author’s Note: “Tenet” was screened for Las Vegas film critics in an extremely socially distanced setting, with fewer than ten people in attendance at a sanitized IMAX theater. While I felt comfortable viewing the film in this setting, I acknowledge that public screenings will simply not have the same level of social distancing. My review of “Tenet” is to discuss the film itself, not to encourage anyone to see the film in a potentially dangerous situation.