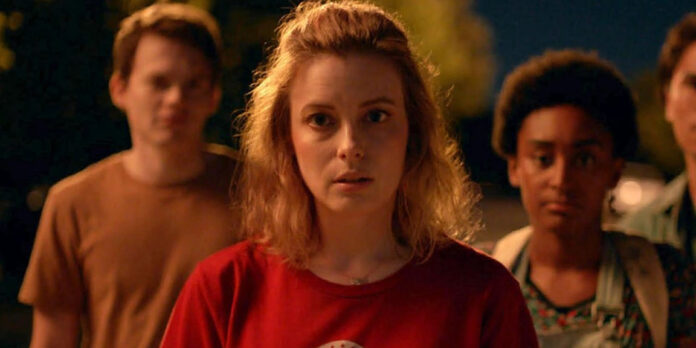 THE STORY – A successful author finds herself deeply enmeshed in the lives of a group of college students after being asked to speak at her alma mater.

Remember when we didn’t care as much? When we felt empowered to do and become anything we wanted? When the world was right at our fingertips, with endless potential and possibilities? “I Used To Go Here” is an indie-comedy which explores this mindset from the point of view of a jaded and tired 35-year-old who is looking back in hopes that she will once again, look forward. In what has mostly been a desolate time for all of us, it’s nice every now and then to be able to watch a comedy that reminds us it’s ok to feel good again.

Kate Conklin (Gillian Jacobs) is a 35-year-old newly published writer who has experienced a series of highs and lows since graduating college and entering “the real world.” One of those lows is that her book tour has just been canceled. Feeling like a failure, she then receives a call to come back to her old alma mater by a former professor (Jermaine Clement) to do a reading from her book. Needing a confidence booster at this stage in her life, Kate starts to revisit old friends and places, reminiscing on the good times, before there were expectations and failure. Along the way, she meets a new group of kids living in her old college house who she unexpectedly bonds with and starts to rediscover herself through her own self-reflection.

While “I Used To Go Here” may be a very simple story with no giant set pieces, it makes up for it with its authentic humor and awkward moments between Kate and the various people she interacts with. Credit must not only be given to Kris Rey’s writing and direction but also to Gillian Jacobs’ lead performance. With her charismatic charm yet wearied self-doubt, she inhabits a character which we can all relate to at some point in our lives, whether it be now or if you’re younger, later in life. At one point she says, “I don’t think life is bold like it is in stories. I think life is very restrained.” And this line of dialogue tells us not only a lot about who she is but what kind of film Kris Rey has set out to make. Whether it’s her run-in with a former classmate named Bradley Cooper (Jorma Taccone) who just likes to go by “Brad” now, or one of her past professors that she may or may not have had a sexual attraction to (Jermaine Clement), Kate’s run-ins always put character and story first, with a few laughs sprinkled in there.

There’s a line in the film where Kate tells another aspiring writer, “Life is not like school where it’s a safe place to try things out” and “I Used To Go Here” is not a perfect film by any means. There is a third act breaking and entering sequence which I guess is the film’s attempt at a big set piece. However, it bogs down the more interesting parts of the film which are the various interactions and conversations that not only reveal more about the characters but expand upon Rey’s themes in a meaningful and insightful way. Kate’s brief bond with a student living in her old college room (Josh Wiggins) is a great example of this. While I too “think it could be better,” this is one of the better indie comedies I’ve seen in 2020.