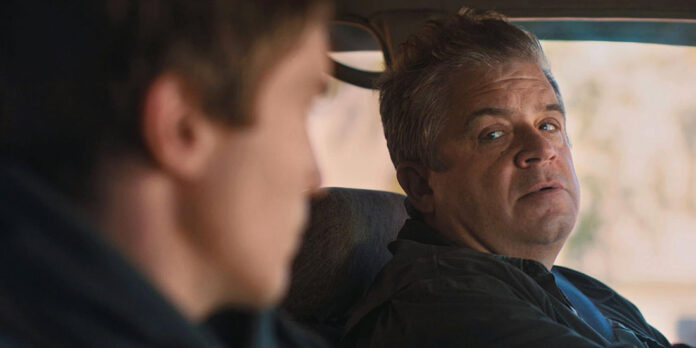 THE STORY – A desperate father poses as a woman online to reconnect with his estranged son, but things get complicated when the young man wants to meet her in person.

​​It’s a fascinating experience to have one’s expectation of a film that slowly unfolds into something completely different over its runtime. This phenomenon doesn’t happen too frequently, given the vast amounts of marketing that goes into selling precisely what kind of ordeal will be presented. Still, occasionally there are times when preconceived notions are subverted. In many cases, that can point to a negative outcome, as if an audience feels cheated or misled about the tale they initially signed up to watch. Other times it can be a pleasant surprise, revealing a deeper and more interesting story than was promised. On the surface, “I Love My Dad” appears to inhabit a very specific mood but thankfully has much more intriguing elements at play.

The premise here revolves around the relationship between Chuck (Patton Oswalt) and his son Franklin (James Morosini). Chuck attempts to be involved in his son’s life, though a little too eagerly, as he bombards him with an onslaught of messages and requests. This is all in an effort to create a stronger bond that was weakened in the early years because of his distant, absentee status. However, Franklin is recovering from a suicide attempt and decides to block all communication with his father while he deals with his mental health. Chuck creates a new online profile to get around this, using pictures of local waitress Becca (Claudia Sulewski) unbeknownst to her and poses as this woman to talk with Franklin. What starts out with good intentions soon becomes very complicated when Franklin falls in love with the woman on the other end, leading Chuck down a dangerous path where he must confront all the demons he has created.

Oswalt’s central performance is an engaging anchor for the film, as he fully embodies the awkward turmoil linked to an authentic sense of guilt and trauma. He most certainly is reliable in selling the comedic bits, but there is also a sadness that colors every moment Oswalt is well-suited to deliver. Likewise, Morosini has an even greater reserved anguish that is compelling to witness, which helps to create a more nuanced portrait of a fragile soul teetering into despair but also willing to accept the light of optimism. He is actually the best in show, striking the right balance of tone that makes this character feel relatable and genuine. They’re also fine turns in the supporting cast, particularly from Sulewski, as she gives a far more layered portrayal and infuses every scene with an infectious energy. Small roles inhabited by the likes of Lil Rel Howery and Rachel Dratch are quite endearing and also showcase much more complexity at hand than their shallow characterization would suggest.

The broad lines that sketch out these characters are one of the big deficiencies in this script, penned by the film’s director and star, Morosini. The story can often indulge in a blunt execution, particularly at the start of the film, where events are plainly presented with little build-up and quickly brushed aside. It’s a frustrating method of establishing the overall tenor of the storytelling. It doesn’t help that Morosini’s efforts as a director are mostly nondescript, sometimes exhibiting some theatrical flair but mostly restrained and unassuming. It’s not a terrible style for this type of narrative, but it can often leave much to be desired when some of the details lack depth.

At the same time, what ultimately makes the film a fascinating piece is how seriously it takes its intentions to craft a sincere look into broken relationships between children and their parents. The depiction of loneliness and isolation in a digital age feels prescient and pointed, with a credible voice to the subject of forming romantic connections online that is entirely grounded. Even here, the direction is more inventive, giving a visual representation to texting exchanges that help breathe a liveliness to these conversations. All of this is in service of a story that is far more effective at presenting sequences that emphasize drama over comedy. The latter aspect can veer into histrionics, particularly with a hard-to-watch climax drenched in cringe. Yet, there is a captivating plot that shows the pain of parents’ inability to connect with their children and the struggles to maintain such a bond in complicated ways. The film ends up with a rich exploration that is surprising given its set-up. What is conveyed is far more tender and cathartic than one would assume.

It’s easy to infer “I Love My Dad” to be a very specific type of film, one whose aim will be for dull satire and shallow observations. The film does entertain these preconceptions at times, and it is by far the weakest point of this exercise. Still, there lies a richer thematic commentary that strikes at an effective emotional core. The surprising earnestness is utilized to express a grounded character study that is quite moving and heartfelt, encased in an identifiable melancholy that gives the material more power. Thanks to engrossing performances and smart writing, this endeavor successfully subverts the trappings of the genre it has seemingly entered and produces a far more provocative work.