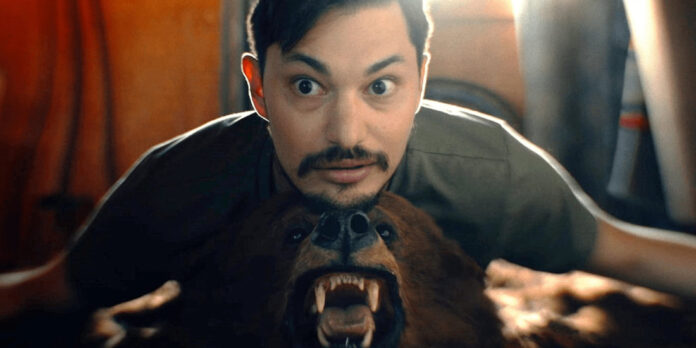 THE STORY – Will has a loving boyfriend and a good life, but when his mentally ill mother reemerges after a 10-year absence, he descends into a dark spiral of madness, haunted by the manifestation of his childhood trauma.

It may be a somewhat mocked turn of phrase at this point, but it’s still true that horror can serve as a realm to explore trauma and grief through an artistic lens. A lot of what is mined thematically in this genre looks to comment on the anxieties that exist in the real world, exposing the terror they lay on the psyche and their damaging effect. The beauty of these films is that such a reading can be found regardless of the complexity of the characterization, as even the most thinly constructed slashers inherently carry a fascinating social commentary. Such discussions aren’t buried in the slightest in “Hypochondriac,” a film that clearly states its metaphors with mixed results.

The tale here centers around Will (Zach Villa), a young man living a relatively quiet life in Los Angeles, working in an establishment that creates luxury pottery pieces. However, there’s a darkness in his past that has continued to haunt him. Will has survived a distressing childhood that included a distant father and, most troublesome of all, a mentally disturbed mother that terrorized him. He has tolerated this as much as possible, but strange occurrences are now happening in his life. Vibrant hallucinations are plaguing his mind, and Will is terrified that he may have inherited his mother’s illness. Despite the support of his boyfriend Luke (Devon Graye), Will’s anxieties only increase, and his behavior becomes even more erratic. He is pushed to the breaking point to confront the demons which can potentially consume and destroy him.

Writer-director Addison Heimann certainly has no allusions as to what his objective is. The core of the narrative is to utilize the trapping of horror tropes to illuminate the fractured mental state of its protagonist, reflecting the cinematic horror back onto real-world dread. Unfortunately, the directorial efforts often impede the success of such an impact. Despite some occasional strong framing, the filmmaking tries too hard to sell its premise and indulges in choppy editing and overly stylized imagery. The latter element ends up contributing to a primarily dull tone, particularly poisonous for this genre. The collection of ideas embedded within this text are intriguing, and it’s a shame that most fall victim to a flat execution that is mostly unengaging.

Within that text, though, are compelling themes and examinations that can make one invested. While the attempt to tell a frightening story may be stymied, the human drama at the heart of this piece is far more captivating. Ultimately, there is a character study of a man who is appalled at the notion he might obtain a familial trait that will tear his life apart and push away those who want to help. It’s a more understated perspective that is a much more effective manner of storytelling. The quieter moments that hone in on the grounded emotions are far more accomplished at conveying thematic resonance than any of the moody scenes with nightmarish creatures popping out of the dark. One comes to an appropriate understanding that mental illness is a notion that can never be erased, only recognized and worked through, and it’s a powerful statement that is muddied by the subpar writing. The potential is there for a more engrossing portrait, but it’s mostly unfulfilled.

Villa does a fine job embodying the paranoia and fear that devours Will. It’s an interesting contrast from the start, where Will’s personality is warm and inviting, though one can immediately detect the darkness underneath that exterior. Once that front dissipates, Villa’s performance is more impressive as he communicates an authentic portrayal of a suffering soul that’s helpless to the mental damage being inflicted on him. It won’t be considered one of the all-time great horror acting showcases, but he anchors the film commendably. Graye is also a well-suited scene partner as the foil to Will’s erratic demeanor. He mainly offers concerned stoicism, but the scenes they share are particularly alluring. The only other member of the ensemble with much to do is Marlene Forte as Will’s mother. She certainly offers the manic side of her character and the ever-present danger, even if the histrionics are infrequently earned. Her performance is notable but conclusively meant to linger in the atmosphere while the leading actor calls most of the attention.

There are aspects of “Hypochondriac” that one can appreciate. The film’s central message about the damaging effects of successive anguish is an appealing subject. The film’s often successful crafting of intimate sequences of tension, which invests a genuine human connection, is also of note. The more significant issue at hand is how lacking the horror component is in establishing a world with palpable unease due to the wooden and tedious realization. Despite some endearing performances to support it, this film cannot rise above its mediocrity to deliver on the promise of a more enticing work. The pantheon of entries within this genre that aim to observe the more realistic horrors in life will never cease, though one can hope for more successful achievements.