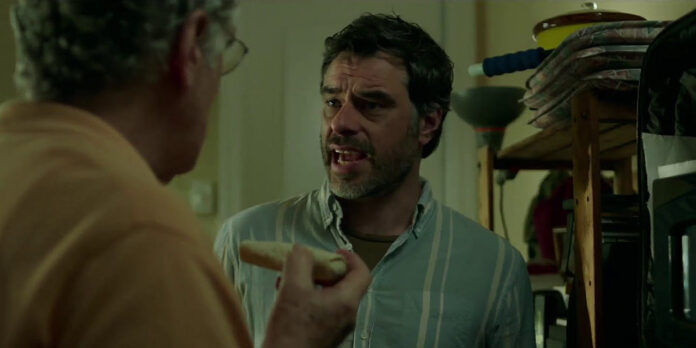 THE STORY – An aging father refuses to engage emotionally with his son, who is desperate for approval.

​“Humor Me” opens with a black and white scene, narrated by Elliot Gould’s character, Bob. There’s a man, Zimmerman, in a full body cast with a doctor by his side. The doctor tells him he’s lost his, ahem, manhood, but a $90,000 settlement can help him rebuild it. “Talk to your wife before you make any decisions.” What do they decide? “We’re getting brand new marble countertops!”

This is the type of classic joke Bob loves to tell, all starring Zimmerman. We see them acted out, perhaps in Bob’s imagination. They’re a bit odd, but the punchline usually lands. This is what Bob does: he tells jokes all the time. He wants the laughs. Writer/Director Sam Hoffman has made a career as of late with this sort of humor in his book series and play, “Old Jews Telling Jokes”. But this film does have more than these goofy, if slightly lame, jokes.

Jemaine Clement plays Bob’s son Nate, an award-winning playwright who never quite lived up to his potential. His wife (Maria Dizzia) leaves him for a billionaire and takes their son with her. It just so happens to be the same day he loses his job and days before their lease runs out. With no job, wife, or home, Nate moves in with his dad in his retirement community. The themes the movie explores are pretty familiar, but they’re worth exploring. Wasted potential, an emotionally distant father, mid-life crisis. He has some growing up to do. Bob forces Nate to get out of the house and get a job, setting him up with one in the retirement community. The place is full of hilarious retirees, most of whom love a good joke as much as Bob does. Naturally, Nate hates this job, but it gives us a few good laughs thanks to his boss, played by Willie C. Carpenter.

Clement’s performance is really strong throughout the film, even if he has a bit of trouble hiding his New Zealand accent. He’s full of regret, sadness, and pent-up emotion, but he’s still light and affable. It’s a great role for Clement. The same goes for Gould, though he’s not given terribly much to do. He plays his goofy role very well.

Before long, Nate ditches the job and finds his way to keep busy: coaching a group of old women putting on a version of The Mikado for the community. These four women, Priscilla Lopez, Annie Potts, Rosemary Prinz, and Le Clanche du Rand play very well off each other and make for some entertaining scenes. Nate has a tough time fending off Helen’s (du Rand) advances. Singer Ingrid Michaelson also gives a nice supporting turn here, playing Nate’s partner in putting on the show (and potential love interest).

Still, though the film has a light and quirky atmosphere, the laughs aren’t are consistent as they should’ve been. Nor is the drama between Nate and his father strong enough to hold much weight. “Humor Me” plays it a bit too light on both sides, never being funny enough to be memorable or dramatic enough to truly make an impact. That’s not to say it doesn’t have its moments. The funniest sequence in the film starts with Helen coming onto Nate and ends with a low-speed chase between a Vespa and a golf cart. There’s also a nice emotional confrontation when Bob sees Nate’s acclaimed play for the first time. These dramatic moments work well when we get there, but they’re few and far between. The tension inside Nate never truly pushes the film forward and therefore doesn’t hit very strongly in the end. Still, the movie works as a whole, with very few missteps. Though a bit light on laughs and emotional weight, “Humor Me” is a solid, heartfelt, and entertaining film.