How Will The Extended Awards Season Affect Sundance? 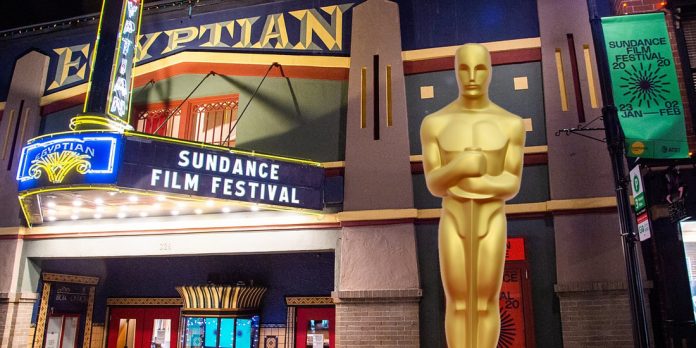 This past June, the Academy of Motion Picture Arts & Sciences (AMPAS) announced that the 93rd Academy Awards would be held on April 25th, 2021, with an eligibility window going until February 28th, 2021, due to the pandemic’s effect on the film industry. AMPAS had previously announced adjustments to film eligibility to allow films that premiered on streaming services as long as they had a previously planned and announced theatrical release that was stalled or canceled due to lockdown restrictions. This extended awards season (by far the longest we have seen in our lifetime and the latest date since the first Oscar ceremony held on May 16, 1929) has caused a ripple effect across other awards shows, pushing back the dates of nomination announcements and ceremonies like the Golden Globes and the BAFTAs to be closer to this new Oscars date. While this extends this movie year into part of 2021, many are wondering how this will affect the typical rollout of Oscar contenders at fall film festivals. However, something even more interesting to look into is how this extended awards season will affect Sundance, a film festival held in January that typically marks the beginning of a new film year. How will the 2020 Sundance come into play when the 2021 festival is happening right before the Oscars and within eligibility?

Sundance (and all the other major film festivals for the foreseeable future) will look quite different from previous years due to lockdowns and restrictions and with COVID-19 in the United States not looking like it’s ending anytime soon. Sundance even recently announced their potential plans of having the festival go digital, as well as partnering with independent theaters in many other major cities in the hopes of limiting travel. However, here we will be focusing more on the content of this festival and its potential impact on the awards conversation (although this new format will play a factor in that).

As soon as AMPAS announced its eligibility extension, it felt like a death knell to the awards chances of any film released in the first half of the year. Awards season has been mostly relegated to films premiering and releasing in the last couple of months of the year, but 2020 felt like an opportunity to change that. With fewer months with movie theaters actually open, and therefore fewer films being released, this opened the door for smaller films released during or right before quarantine to have a better shot at getting deserved recognition. Now, films like Sundance favorite, “Never Rarely Sometimes Always,” which opened in limited theaters right before quarantine and then immediately went to VOD, will likely be relegated to only recognition from critics’ groups and independent film-based awards bodies like Gotham and the Spirit Awards.

On the flip side, some studios or filmmakers could see this extension as an opportunity. Who’s to say that a film can’t premiere at the 2021 Sundance with a “theatrical” opening in late January-early February and be a major contender? A film needs to come out at just the right time: not too early to be forgotten and not too late before voters get the chance to see it. With Sundance now being the last major festival of the season, the typical indie fest could become a hub for awards prospects. Smaller studios and distributors like A24 and Neon could hold off premiering their potential Oscar flare until Sundance to stand out and be fresh in voters’ minds. It seems like the type of strategy that could work with something like A24’s upcoming adaptation of “The Humans,” considering their recent track record with the festival.

The one aspect of the awards race that I think the 2020 Sundance slate could have an impact on is the Best Documentary Feature. More often than not, particularly in recent years, the nominees and winners of this category typically premiered at Sundance. The festival has become the prime spot for major and critically acclaimed documentaries to premiere, and 2020 was no exception with films like “Crip Camp,” “Time,” “Welcome to Chechnya,” and more. If we see any Sundance 2020 premieres in the Oscar race, they will likely be documentaries.

Taking the awards race out of the conversation, Sundance does seem like the film festival that could adapt the easiest to this updated (digital or condensed) format. With the bigger, flashier festivals, people are worried about bigger films premiering on these digital festival platforms and studios allowing them, whereas Sundance’s history of spotlighting independent films from new or up-and-coming directors shouldn’t be a problem. Although Sundance still has bigger films premiere there (though usually out of competition and right before their theatrical release), it doesn’t seem like its library of films will be hindered by this format.

Something that I and others wonder is if this awards season extension is to allow more films to qualify, why do that for this year? Even up until March, movies were still being filmed and can be edited safely; this season was not the problem. We worry about the state of films this year and what’s to come, but there are still plenty of films in the can and completed. What will come next year when those run out? That’s a much bigger discussion to have. What I do think it means is perhaps a rise or at least more opportunities for documentary films who, as we said before, thrive at Sundance. Documentaries don’t necessarily need a set and most have likely been in the works for years and can be done remotely for certain aspects. I have a strong feeling that the newest films to come to the 2021 Sundance will be documentaries (or even perhaps short films made in isolation). When it comes to awards season and how Sundance will factor in, always bet on the documentary race. Anything else, we shall see.

How do you think Sundance will be affected by these changes by the Academy? Let us know in the comments section below or on our Twitter account.