How Will The 77th Golden Globes Affect The Oscar Race? 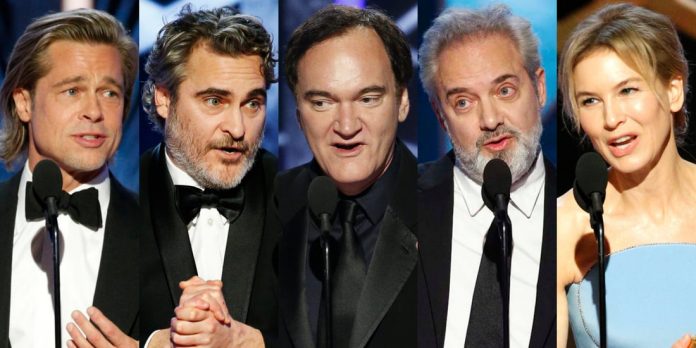 The most unpredictable Golden Globes in quite some time has now wrapped up! With just a day left in Oscar voting, was there enough time for these winners to affect the nominations?

​Let’s dive into the winners and losers of the Globes and how it might play into the Oscar race.

Sam Mendes won Best Director for “1917” – twenty years since his previous win in the category. Though it suffered a surprising loss in Best Original Score (we’ll get to that in a moment), it prevailed in the top award of the night. This was a vital win for the late-breaking film, and it happened just before the film enters wide release this weekend. Still, is the film entering the competition too late to win the Oscar? It’s sure to be seen as an undeniable directorial achievement, but will that be enough to defeat “Once Upon A Time in Hollywood,” “The Irishman,” or even “Parasite”? Best Motion Picture Drama has only lined up with the Oscars three times in the past ten years, and I suspect “1917” won’t win Best Picture.

Bong Joon-ho lost Best Director but made a splash early on with “Parasite”’s win for Best Foreign Language Film. “Once you get over the one-inch tall barrier of subtitles, you’ll be introduced to so many amazing films,” he said in his speech. It’s one of the best quotes of the evening. With “Parasite” not eligible for the Globes’ Motion Picture categories, the film is in a unique spot heading into Oscar nominations. Tonight didn’t build much buzz for the film, but it may be poised to strike while “The Irishman” is down. Of course, “The Irishman” went home empty-handed this evening, and it’s starting to seem likely that it won’t win any Oscars outside of the craft categories.

Our winners for Drama Actor, Drama Actress, Supporting Actor, and Supporting Actress are all primed to sweep the season. Pitt will ride his wave of effortless cool to his first acting win, just as Laura Dern will ride the wave of her charm. I thought that Jennifer Lopez might break up her streak tonight, but it seems as though the Oscar is hers to lose. Joaquin Phoenix’s win is utterly unsurprising, and he solidifies his place as the tightest lock of them all. Even Cate Blanchett professed her love for his performance while introducing “Joker”’s Best Motion Picture Drama nomination. He’s winning. Renée Zellweger won for her portrayal of Judy Garland, and it makes a lot of sense for her to continue on to win the Oscar. Perhaps of these four, Zellweger feels the most vulnerable to an upset, much like Glenn Close last year. Can Scarlett Johansson or Charlize Theron win instead? My guess is no, but SAG will help clarify that for us soon.

​The other two acting winners, Taron Egerton and Awkwafina in the Comedy/Musical categories had their chance to show the Academy why they deserve inclusion. Both are hovering on the outskirts of their respective categories at the Oscars. Awkwafina’s win was a bit easier to come by, as she didn’t face off against any of the expected Oscar contenders. Her speech was lovely, funny and sweet, and she got a great moment to shine. Only three Best Actress Comedy/Musical winners in this century have missed an Oscar nomination (Zellweger in “Nurse Jackie,” Sally Hawkins in “Happy-Go-Lucky,” and Amy Adams in “Big Eyes”). Will Awkwafina join those three? If any undecided voters needed to make up their minds for their Best Actress nominees, this may have convinced them to place her in the lineup.

Egerton’s win for “Rocketman” was a really great step for him, as he defeated one likely Oscar nominee (Leonardo DiCaprio) and a legend (Eddie Murphy) who both had strong opportunities to win tonight. This, paired with Elton John and Bernie Taupin’s win for Best Original Song, puts Egerton in a very strong position to make the final Best Actor lineup. Egerton and John have been dominating the campaign trail, showing up everywhere and shaking every hand. John and Taupin even started to lay out a narrative for a Best Original Song win, saying that the two of them have never won an award together before this Golden Globe win. I think Egerton is safe for a nomination, as is “(I’m Gonna) Love Me Again” for Best Original Song.

Elsewhere, while receiving the Cecil B. DeMille award, Tom Hanks gave an all-timer of a speech, even with a cold. He’s been notably snubbed by the Academy in recent years and hasn’t received an Oscar nomination since 2000 for “Cast Away.” Even though there are only two days left to vote for the Oscars, it’s hard to imagine he misses out this year for his performance in “A Beautiful Day In The Neighborhood.”

The most shocking win of the evening belonged to “Missing Link,” which won Best Motion Picture Animated, somehow defeating Disney heavyweights “Toy Story 4” and “Frozen II.” Was it a result of vote-splitting between those two? In the thirteen years of the category, the Globes have only failed to line up with the Oscar for Best Animated Feature three times. Is this a fluke, or is Disney in danger of back-to-back losses at the Oscars? I’m guessing Disney shouldn’t be too worried.

Thomas Newman, perennial Oscar loser, lost the Globe for Best Original Score tonight. Instead, Hildur Guðnadóttir won for her “Joker” score. She’s only the second woman to win in the category, and the first to win it solo (following Lisa Gerrad’s win with Hans Zimmer for “Gladiator”). Assuming both are safe for Oscar nominations, if Newman loses, he will extend his own streak as the second-most nominated person without an Oscar win.

All in all, it seems as though “Once Upon A Time in Hollywood” is in the best position post-Globes. Tarantino is finally heading toward his Best Picture win. Will anything get in his way? There’s only one week left until the Academy Award nominations are revealed. How did the Globes affect your predictions? Any big changes after the ceremony? Let us know what you think in the comments section below or on our Twitter account.