How The SAG Awards Could Affect The Oscars 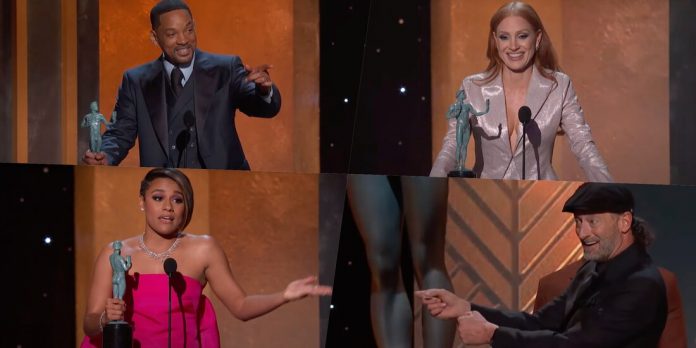 By Daniel Howat
​
As one of the best precursors for the Academy Awards, this year’s SAG Awards helped give some much-needed clarity to the Oscar race. There were unexpected joys, continued steamrollers, and a phenomenal celebration of acting. The Screen Actors Guild Film Awards could significantly affect the Oscar race, whose final voting doesn’t open for nearly three more weeks. Let’s break down all five categories and their counterparts at the Academy Awards.

BEST SUPPORTING ACTRESS
Ariana Debose is currently sitting pretty without competition. The “West Side Story” actress is the newcomer of this season, receiving her crown, and nothing will be standing in her way come the Oscars. Most pundits have been predicting a sweep for the young actress, and with Golden Globe and SAG wins now in hand and no consensus runner-up nominated, Debose has a clear path to victory. Caitríona Balfe was once thought to be the challenger to Debose’s win for her work in Kenneth Branagh’s “Belfast,” but her surprising Oscar miss has made it all the more evident that Debose will be winning the gold on March 27th. Especially when you consider Kirsten Dunst is not even nominated at BAFTA for her performance in the current Best Picture frontrunner, “The Power Of The Dog.”

BEST ACTOR
Much like Debose, Will Smith’s path to his first Oscar win looks quite clear for his stellar work in “King Richard,” but minor hesitations are still here. He won the Golden Globe and the SAG award, just like Debose, but last year’s turn of events in this category gives me and some others pause. Though it’s not nearly an identical scenario, last year saw the late Chadwick Boseman on an almost unstoppable path to a posthumous Oscar win for “Ma Rainey’s Black Bottom,” winning the Golden Globe, SAG, and Critics’ Choice Award. Then, Anthony Hopkins won BAFTA for his breathtaking all-timer work in “The Father” and then went on to win the Oscar.

It’s quite possible Benedict Cumberbatch wins the BAFTA for Best Actor and then scoops up the Oscar for “The Power Of The Dog.” After all, the film is likely winning Best Picture, so it’s even more beloved than Hopkins’ “The Father.” A sweep for Smith has seemed quite likely all season long, and SAG is undoubtedly a helpful boost, but it’s tough to shake off the familiar feeling that it might not be so simple. Smith is safe…for now. Keep an eye on BAFTA to foreshadow a potential upset.

BEST SUPPORTING ACTOR
How could you not cheer for Troy Kotsur? The “CODA” star became the first deaf person to win a SAG award, individual or ensemble, while co-stars Marlee Matlin and Daniel Durant joined him with their SAG Ensemble win later in the evening. Best Supporting Actor is now an actual race between Kotsur and Kodi Smit-McPhee for “The Power Of The Dog.” While Kotsur snagged the SAG Award, Smit-McPhee previously won the Golden Globe. The Hollywood Foreign Press Association has a slightly better track record of predicting the Oscar winner over the last twenty years (15/20 at SAG to 16/20 at Golden Globes), and like Cumberbatch, having the potential Best Picture winner behind you is always helpful.

Still, it’s hard not to feel the incredible momentum Kotsur and “CODA” have right now. Who wouldn’t want to see Kotsur give a speech on the big night? While “The Power Of The Dog” may end up winning Best Picture, that’s all the more reason for voters to pick Kotsur to spread the wealth. It’s likely the only place that “CODA” could win at the Oscars, too, so for those who love the movie, this is the place to vote for it. “The Power Of The Dog” is heading into the Oscars with at least a few near-locks, even if it somehow loses Best Picture, including Best Adapted Screenplay and Best Director for Jane Campion. Kotsur is “CODA’s” best bet, and my money is on him to take home the win when all is said and done.

BEST ACTRESS
For the second year in a row, Best Actress may be the most unpredictable award of the Oscar season. Last year Andra Day and Rosamund Pike won at the Golden Globes, Viola Davis won the SAG, Carey Mulligan won the Critics’ Choice, and Frances McDormand won the BAFTA and, eventually, the Oscar. This year, Nicole Kidman (“Being The Ricardos“) and Rachel Zegler (“West Side Story” – she’s not nominated at the Oscars) won the Golden Globes for Best Actress in a Drama and a Comedy/Musical, respectively. Now, Jessica Chastain picked up the SAG Award for her transformational performance in “The Eyes Of Tammy Faye.” Additionally, none of the Oscar nominees for Best Actress received nominations at BAFTA, which means it’s no help for predicting this highly competitive category this year. Critics’ Choice may help, but we may be facing two years in a row with different women winning every major precursor in the lead-up to the Oscars.

It’s a very tough call between Kidman and Chastain at this point. Having a major televised win close to voting is a big boost for Chastain. Kidman didn’t get to give a speech at the Globes, which went un-televised, plus, she’s already got an Oscar on her shelf for her work in “The Hours” (2002) while this would be Chastain’s first Oscar win. Spreading the wealth and providing a beloved actress like Chastain her chance at Oscar gold is an attractive proposition, one that may be befitting at this stage of her career.

Neither “Being The Ricardos” nor “The Eyes Of Tammy Faye” was particularly beloved by the Academy, but the edge seems to go to Aaron Sorkin’s film at the moment. Compared to “The Eyes Of Tammy Faye’s” other lone nomination for Best Makeup & Hairstyling, the three acting nominations for “Being The Ricardos” are nothing to sneeze at, especially when you consider the acting branch of the Academy is still the largest voting branch. It’s a very close race, but this late-stage SAG win has me leaning toward Chastain for the time being.

The Ensemble win for “CODA” is a huge step forward for representation, and it will undoubtedly help Troy Kotsur rally to win the Oscar for Best Supporting Actor. Still, it’s unreasonable to think this means the film is winning Best Picture. The odds aren’t there. If anything, it fortifies frontrunner status for “The Power Of The Dog,” since its closest competition, “Belfast,” went home empty-handed last night. For me, “The Power Of The Dog” still has the best case to win the top prize this awards season.

There’s still lots of time left and numerous precursors yet to be awarded. Plenty of things could still change in the ever-shifting awards landscape, but the race is becoming clearer and clearer thanks to the SAG Awards.

What did you think of the SAG winners? What were the biggest surprises of the night for you? How does this change your Oscar predictions? Let us know in the comments section below or on our Twitter account. Be sure to listen to our immediate reactions to the show on the Next Best Picture Podcast here and check out our latest Oscar predictions here.