Surveying The Oscar Field: Where The Race Stands Post-SAG 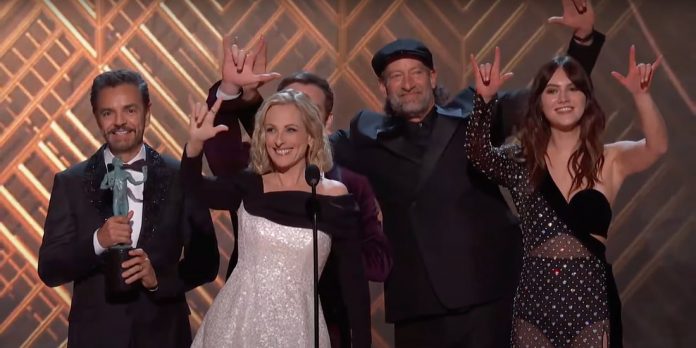 ​There are four weeks left to go this Oscar season, with the SAG Awards marking the beginning of the final stretch. With the PGA, WGA, DGA, Critics Choice, and BAFTA awards all lying ahead the next three weeks, this is where a lot of the major Oscar races will be decided, long before the envelopes are actually read on March 27th. However, there’s a case to be made that a lot of them are primarily set in stone already. Not only that, we may now have SAG to thank for keeping some level of suspense left in any major categories.

Best Picture isn’t wrapped up yet, but “The Power of the Dog” might be a few major victories away in the next three weeks from draining any shred of doubt left. Jane Campion is probably one win away at the DGAs from officially ending the Best Director race. At the same time, SAG ensured Will Smith’s Best Actor coronation for “King Richard” and Ariana DeBose’s Best Supporting Actress steamroll on behalf of “West Side Story” is still right on schedule. Meanwhile, it is starting to feel inevitable that “Belfast” may hold off “Licorice Pizza” in Best Original Screenplay, whether because “Belfast” needs a win somewhere or because “Licorice Pizza” may have peaked too soon. Beyond that, “The Power of the Dog” looks secure in Best Adapted Screenplay, barring one last momentum surge from Cinderella stories “Drive My Car” or “CODA.”

To be perfectly honest, most of the eight major categories are either wrapped up already or either one or two steps away from being decided long before Oscar night. As such, for those of us that still want to debate who’ll win the Oscars rather than how they are being presented, there’s a good chance there won’t be that much to talk about regarding the former. And if SAG had gone a certain way in a few races, the vast majority of suspense left this season would have been squeezed out then and there. But thanks to the shifts SAG provided in Best Actress, Best Supporting Actor, and perhaps even with Best Ensemble, the unpredictability of this season is still alive and might stay that way for one last month.

If SAG has any influence on the Oscars, it is undoubtedly in the acting categories only, with Best Ensemble laying in clues for Best Picture every once in a while. Coming into SAG, two acting categories were largely considered locks; one would have been close to becoming a lock pending the results, and the most chaotic race of the year could have gone from up in the air to settled mainly in an instant.

SAG did absolutely nothing to shake them up when it comes to the perceived locks, as Smith and DeBose won as expected. What would have been more revealing, and perhaps more anticlimactic for some, was as if the assumed favorites for Best Actress and Best Supporting Actor won too. Yet instead, Nicole Kidman and Kodi Smit-McPhee both lost and made their fields wide open again.

If Smit-McPhee had won SAG, in addition to his Golden Globe and the most individual critic award wins of the season, that might have nearly locked up him for a Best Supporting Actor sweep from there. With that essentially secured, “The Power of the Dog” would have come closer to wrapping up the Best Picture race as well, as if its favored status in Best Director and Best Adapted Screenplay hasn’t done so already. But now that “CODA’s” Troy Kotsur may have erased Smit-McPhee’s season-long advantage in one fell swoop, this race is now a race again for the time being. It is easy to assume that Kotsur will now be the one to sweep instead of Smit-McPhee, yet it all depends on the big Critics Choice and BAFTA doubleheader on March 13th. Should Kotsur win both, he will surely have Best Supporting Actor all but settled with two weeks to spare. Yet it’s still plausible that Smit-McPhee has one last critics award win in him at the Critics Choice, or that he could take BAFTA as part of a big night for “The Power of the Dog.” Either way, if he wins just once on this super Sunday, Best Supporting Actor may well be a photo finish two Sundays later. And even if Smit-McPhee wins both, Kotsur’s SAG win would still keep him alive to the end.

While Best Supporting Actor now has some level of suspense left, it is still, by and large, a two-man race only. In contrast, Best Actress has been a five-woman race, if not more, from the very start of the season. However, that would have been in danger if Kidman had repeated her Golden Globe win for “Being the Ricardos” with another triumph at SAG. Although the Golden Globes may have lost whatever influence they once had on awards season, it still gave the closest thing to a sign that Kidman might be the frontrunner. Since every single Best Actress nominee was snubbed at BAFTA and isn’t from a Best Picture nominee, SAG, and the Critics Choice were the last two chances left to bring some order on this race. With a SAG victory to go along with the Globe, and with very little opportunity left for Jessica Chastain, Kristen Stewart, Penelope Cruz, and Olivia Colman to surge back, Kidman would have turned the season’s best race into just another predictable coronation had she won. Instead, it was Chastain that surged back at SAG, which at the bare minimum guarantees two more weeks of Best Actress chaos. Of course, now it is Chastain who is in a position to put a stranglehold on the race, should she repeat at the Critics Choice. Yet since critics as a whole weren’t entirely fond of “The Eyes of Tammy Faye” beyond Chastain, and since they have pushed harder for the likes of Stewart and Colman this season, it would be a mild upset if Chastain kept winning there. Critics were largely less fond of Kidman and “Being the Ricardos,” too, but if she came in after winning both SAG and the Globe, there might have been no stopping her from there. She could still win the Critics Choice anyway and become the frontrunner once again, yet that SAG loss would keep her from all but clinching the Oscar outright at that moment. But after Chastain’s SAG win kept the madness going, it now seems more inevitable that Stewart or Colman will take the Critics Choice and truly make Best Actress a free-for-all to the finish – something that would have been far less likely with two major Kidman wins.

At the minimum, SAG has all but ruled out a scenario where all eight major categories are settled by Oscar night. Still, it may have only kept Best Actress and Best Supporting Actor up for grabs to the end, while Best Actor and Best Supporting Actress are more locked in than ever. As for the Best Picture, Best Director, Best Original, and Best Adapted Screenplay categories that still seem headed for inevitable results, the other guilds will have to throw a last-minute wrench into them if they can. One can argue SAG did its part to keep Best Picture in doubt since both frontrunners in “The Power of the Dog” and “Belfast” were shut out. Nonetheless, “Belfast” losing Best Ensemble did hurt its chance of starting a comeback in the industry award circuit. Yet with Smit-McPhee, Benedict Cumberbatch, and Kirsten Dunst all losing at SAG, too, “The Power of the Dog” didn’t pick up any extra momentum either.

Since “CODA” was the big winner for its ensemble and Kotsur, and since it can possibly win the WGA Adapted category with “The Power of the Dog” ineligible, some will argue it could make a last-minute Best Picture run. But while winning both Best Supporting Actor and Best Adapted Screenplay may well be in play, “CODA” doesn’t have any other Oscar nominations besides Best Picture. However, the snub that truly did “CODA” in was when director Sian Heder missed the DGA field, since “Driving Miss Daisy” is the only film ever to win Best Picture without a corresponding DGA nomination. Nevertheless, some may be desperate to inject suspense in a Best Picture race where “The Power of the Dog” and “Belfast” are well ahead – and where “Belfast” may have only stayed alive for Best Picture because it can still, and perhaps likely will, win Best Original Screenplay. As such, those bored few may look to “CODA’s” SAG success and potential WGA success as a sign for chaos, but chaos may have left Best Picture a while ago.

If not for SAG, chaos may well have abandoned all the acting fields as well, leaving us with nothing to talk about for the next four weeks except the telecast – a truly infuriating prospect for many. But thanks to Kotsur, Chastain, and their fellow actors, the Oscar race is at least a race somewhere for a little while longer.

So what do you think? Did SAG shake up the Oscar race in a big way? If so, how? Will we get the same acting winners at the Oscars? Check out the NBP team’s current Oscar predictions here (they’re updating them tomorrow to reflect the SAG Winners) and let us know your thoughts in the comments section below or on our Twitter account.