How The Acting Branch Could Help “Bombshell” & “Little Women” 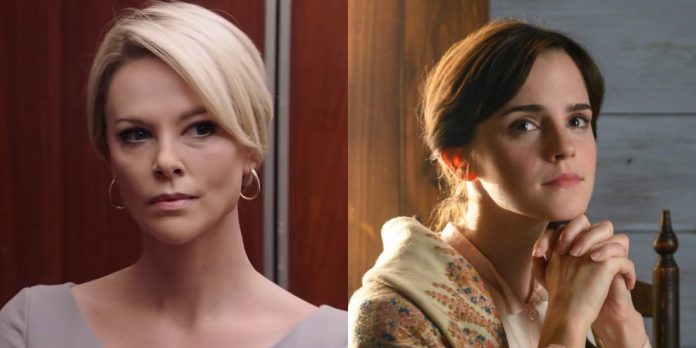 By Ryan C. Showers
​
It’s difficult for a film to grow a high profile without a coordinated effort to build a name for itself. Going to film festivals is an easy way for a movie aiming for awards season to gain great prestige and notoriety, but there are always a few stragglers who bypass the festival opportunities, or films that are simply not ready to be screened so early in the season. The best way for a non-festival late release to find success at the Oscars is by making a big splash upon release. I would argue that leaving an impression on one cohort of the Academy, in particular, is key to Oscar success for films that skip the festival circuit: the acting branch. The two examples of this that jump to mind are “American Hustle” and “Vice,” both released late in December of their respective years without festival exposure. The former received four acting nominations (one in each category) and the latter was awarded three. There were nominations across the board for “American Hustle” and “Vice,” but actors were the beating hearts of these films and the indisputable aspect that people who disliked the two could appreciate.

Two films that have yet to be released – both will release right before and after Christmas Day – stand a good chance of capturing the imaginations of the acting branch of the Academy and Screen Actors Guild members: “Bombshell” and “Little Women.” The two films have cast rosters of multiple Oscar winners and nominees, public-friendly thespians who hold a lot of credibility and respect with actors. They could easily follow in the footsteps of “American Hustle” and “Vice” using a strong appeal to actors to secure their rickets to the Oscars this year.

“Bombshell” was first screened in Los Angeles on October 13. Since then, it has expanded to screenings for industry and the press in New York. The response has been rapturous and consistently positive. It’s been confirmed to be a surefire Oscar contender, with likely nominations in Picture, Original Screenplay, and Makeup/Hairstyling, but most importantly, in the acting races. “Bombshell” is wisely being campaigned with the three women headlining the film as a unit. It’s a strong decision to frame the campaign that way since it propels the inherent #MeToo and feminist themes to an even greater impact and importance with symbolism and a message of unity. The response from screenings has assured a spot for Charlize Theron in Best Actress for her scary portrayal of Megyn Kelly. Margot Robbie has accelerated to the front of the line in Best Supporting Actress for her work, which is said to be very emotional. Robbie’s narrative is helped by her appearance in “Once Upon a Time in Hollywood” this year. She’s going to be nominated for one of these two movies. “Bombshell” is the better bet with the more Oscar-friendly role.

Nicole Kidman, the final member of this trio, has not been greeted with the same “inevitability” factor that the other two have, which does betray the “unit” campaign mentioned above. People who have taken to Twitter to unleash their predictions have not been eager to put Kidman in their Best Supporting Actress predictions. This is a mistake. If this is a film the actors’ branch is going to embrace, Kidman will go along for the ride when Best Supporting Actress is as weak as it is this year. She’s playing Gretchen Carlson, the real-life woman who kickstarted the entire Fox News scandal. Kidman has been everywhere for the past three years and under-recognized for everything that’s not “Big Little Lies,” especially for her performance in last year’s “Destroyer,” which should’ve won her a second Best Actress trophy.

People are always wary to predict two actors from the same film in the same category. This most especially applies when one actor is receiving stronger reactions than another, but this fear is unfounded. There were a few who, last year, refused to predict Rachel Weisz in “The Favourite” along with Emma Stone, who had the more memorable reviews out of Venice. The joke is on them since the BAFTA-winning Weisz was pretty damn close to beating Regina King for the Oscar in the end. Another example can be found in the season before that, too. No one – and I repeat, no one – predicted Woody Harrelson for “Three Billboards Outside Ebbing Missouri” two years ago until he had SAG and Golden Globe nominations. The focus was on Sam Rockwell, who went on to win Best Supporting Actor. Predicting two actors in the same category for the same film was a legitimate concern back then, but if Harrelson’s inclusion wasn’t a lesson for people, I don’t know what will be. In fact, I’d argue there is no stronger comparison to Kidman in “Bombshell” than Harrelson in “Three Billboards Outside Ebbing Missouri.” Another key example is “The Fighter” in 2010. Melissa Leo was the standout and won almost every major Best Supporting Actress award, yet Amy Adams timidly stood by alongside her in the category all season long for work in the same film. “The Fighter” was also a late-breaking, festival-less film like “Bombshell.” Like I said, Best Supporting Actress is weak this year. Robbie and Kidman strengthen the category, and Kidman can and most likely will round out either the fourth or fifth slot, while Robbie competes for the win. Besides, if “Bombshell” is a hit with the acting branch, as the buzz reports now, voters will be ready to reward the trove of the prominent actors here.

​Oscar voters love rewarding actors who play real-life characters in big projects like “Bombshell.” Think Rockwell last year for his cameo, essentially, in “Vice.” On top of Carlson being a controversial real-life person, the narrative around her character will be “important” since she’s the one who opened the floodgate about Roger Ailes. Speaking of Ailes, though the women have mostly been front and center of the reactions thus far, many who have seen it say John Lithgow will most certainly be nominated in Best Supporting Actor for his portrayal of the Fox News powerhouse. It’s the type of performance actors, SAG voters, and Academy members will eat up with a spoon. Lithgow’s prominence in the industry is as strong now as ever. He’s rising in this race where someone like Tom Hanks, Sterling K. Brown, or Jamie Foxx may fall with less attention on their films. There’s one thing that can hold him back: Of any of the four actors, Lithgow would most suffer from voters liberal bias against the real-life figures. Ailes is the villain in this story, on and off the screen.

Unlike “Bombshell,” which I predict a solid four acting nominations, “Little Women” will do less damage in the acting categories. This is mostly due to happenstance. Meryl Streep and Laura Dern have bigger roles in other films in contention for Best Supporting Actress already: “The Laundromat” and “Marriage Story.” Timothée Chalamet may have had some prospects for Best Supporting Actor had it been any other year, but this year’s Best Supporting Actor race is particularly strong, too strong for Chalamet and this role. “Little Women” has two very strong bets: Saoirse Ronan for Best Actress and, a new development post-screenings, Florence Pugh for Best Supporting Actress. Ronan has been on everyone’s radar since the project was announced. Jo March is a dream character, full of pathos, presence, and cultural significance. Ronan has become an Oscar princess in her own right, and the entirety of Film Twitter is just awaiting the day for her coronation. Unfortunately, the reactions don’t indicate Ronan is going to challenge Renée Zellweger for “Judy” or Scarlett Johansson for “Marriage Story” to win the Oscar, but she will round out the lineup with a safe, innocuous nomination.

Next Best Picture’s own Matt Neglia has had Pugh on the Best Supporting Actress radar since the summer, framing an argument for predicting her through the performer having a breakout year (let’s not forget her roles in “Fighting with My Family” and “Midsommar“). I was skeptical to believe it at first, and I still am, even after some reactions have cited her as astonishing in “Little Women.” The reactions have confirmed that she has a shot with a Best Supporting Actress nomination. I remain hesitant because the Oscar prospects for “Little Women” aren’t as clear from the screenings as they were for “Bombshell.” If “Little Women” gets a Best Picture nomination, then I say Pugh gets in. If it doesn’t, Pugh’s chances could go either way. The film, according to critics, delivers an Amy March we haven’t seen on screen yet, and Pugh has a great deal to do with that fact. The opportunity is here, and the easiest way for Pugh to receive a nomination is if the acting branch falls in love with Greta Gerwig’s interpretation of the classic novel. The movie making a splash with the box office and (or) critics’ support for Pugh could help her pull it off. She’s not a known entity like Ronan is, but with the lacking strength of the Best Supporting Actress category, Pugh has an easy path if everything else falls into place.

The acting branch could make or break “Bombshell” and “Little Women.” They are the types of projects to which the acting branch is typically drawn. “Bombshell” is a more recent brand of movie that actors trend toward, while “Little Women” is the kind of film that never goes out of style. How each film plays out with voters and actors remains to be seen, but the ball is in the courts and, as two films that skipped film festival season, there needs to be strong publicity. In a way, Robbie, Kidman, and Pugh could salvage the Best Supporting Actress category and make it a stronger year along with Dern for “Marriage Story” and Jennifer Lopez for “Hustlers,” two contenders that already have strong momentum for nominations.​

What do you think? How are you predicting “Bombshell” and “Little Women” to do in the Oscar nominations this year? Do you believe their ensembles will carry them over to Best Picture and acting nominations? Let us know in the comments section below or on our Twitter account.