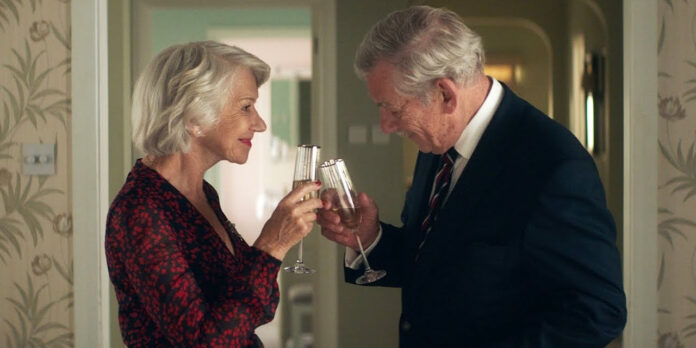 THE STORY – Career con artist Roy Courtnay can hardly believe his luck when he meets well-to-do widow Betty McLeish online. As Betty opens her life and home to him, Roy is surprised to find himself caring about her, turning what should be a cut-and-dry swindle into the most treacherous tightrope walk of his life.

​​​​​​When the trailer first dropped for “The Good Liar” one’s initial reaction was curiosity, the trailer certainly played up the mysterious twists and turns that feature in the end product, but as we approached the release date of the film the lack of buzz, or reviews for the film was frankly a somewhat worrying sign. Perhaps the lack of advance reviews was intentional in order to avoid any spoilers being released, or perhaps the studio lacked faith in the film. Whatever the reason may be, “The Good Liar” is a fairly decent film that you can take your mother to, although your grandmother may be put off by the sudden burst of f-bombs and the graphic violence that feels like they have wandered into the wrong film.

Adapted from the novel by Nicholas Searle, “The Good Liar” follows Roy Courtnay (Ian McKellen) a veteran con-man who has his set his sights on lonely widow Betty (Helen Mirren) and plans on swindling her out of her life savings. Roy is quick to move in with Betty, much to the dismay of her grandson Steven (Russell Tovey) who has his suspicions about Roy’s true intentions. And as Roy gets closer to Betty, ghosts from his past begin to rear their ugly heads with devastating consequences.

It is best to go into “The Good Liar” as blind as possible, the less you know about the film’s narrative the better, and rest assured this review will do its best not to contain any spoilers. And, there are some rather big juicy twists that explode on the screen in all their dramatic flair which will keep you chatting away to your friends long after the credits have rolled. Bill Condon does a fairly good job handling the film’s more dramatic and dialogue-heavy scenes, but the film’s more action-based scenes plod along in such a paint-by-numbers fashion that they are hardly memorable. Visually the film feels a little too safe, too neutral and too bland although it is handsomely shot by cinematographer Tobias A. Schliessler who makes good use of wide bird’s eye shots lurking over our characters.

The film’s saving grace is McKellen and Mirren who make such a good pairing that even when the film sputters along and gets a little too clever for its own good, our attention is still maintained by these two living legends. Mirren is as delightful as always, but for the majority of the film, she is playing second fiddle against McKellen’s Roy. This is really McKellen’s film, as he dominates the scene, demanding our attention as we watch him chew up the scenery. It’s pretty evident that both actors had a lot of fun making this film, alas if only we had the same amount of fun watching it.

The film is at its most interesting as we observe McKellen’s Roy go about his day, wooing and charming old ladies and getting his hands dirty with underground gangster types. However, we never really truly understand his motivations, aside from being a greedy old sod. Perhaps most frustrating is the fact that his past is revealed to us in two rather rushed flashbacks, whereas one suspects that in the novel Roy’s past was given far more attention and we received more of an insight into the inner thoughts of Roy. A certain reveal in a flashback scene is presented so clumsily and is quite confusing to follow, that without having prior knowledge of the events depicted in the book you may be left slightly baffled as to how quickly a situation develops. And, there are certain plot points that all seem a little too convenient and contrived that they become rather distracting.

While, McKellen and Mirren are superb, along with a fairly admirable supporting cast, the film just feels a little underwhelming. It’s hard to put your finger on what the issue is exactly. “The Good Liar” isn’t a bad film, and it’s not this year’s most disastrous adaptation, but it just feels a little bland and muddled in places. Towards the end, the film becomes so bogged down with twists and reveals that it loses the fast-paced momentum that it had at the very beginning. Overall, “The Good Liar” is a good way to pass the time on a rainy afternoon in the fall but not a film you should rush out to see.